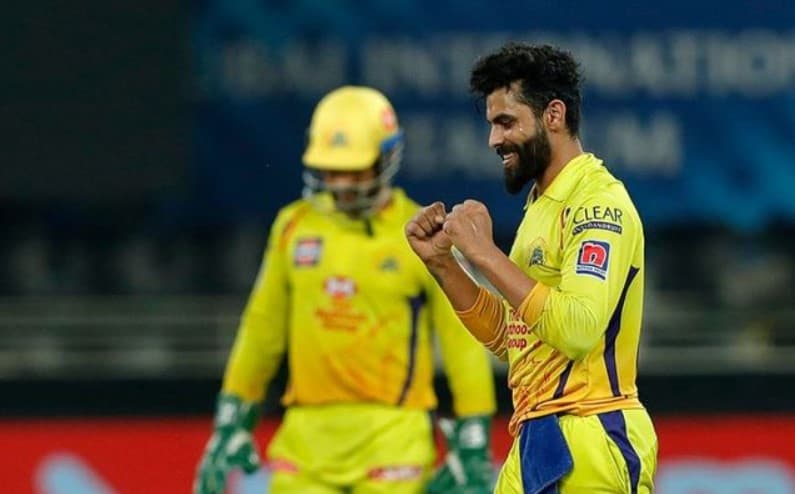 Ravindra Jadeja had a field day with the bat and ball, playing a superb inning in both cases and propelling CSK to the top of the league. Get the full story below.

Chennai Deliver with the Bat; Jadeja Stars in the Final Over

Faf du Plessis continued his fine form with the bat, hitting yet another half-century. Meanwhile, Ruturaj Gaikwad had a good day at work too, scoring a respectable 33 off 25 balls to give Chennai a good start.

They went through the powerplay without losing a single wicket. With that kind of a solid start to the inning, MS Dhoni-led Chennai Super Kings were showing all signs of putting up a big total.

Suresh Raina also contributed 24 runs but it was Ravindra Jadeja who stole the show. Bangalore could have restricted CSK to a low total in the 150s to 160s but Jadeja had other plans.

Interestingly, he was dropped by Dan Christian at deep midwicket when the CSK batsman was at 0 off 4 deliveries. Had that catch been taken, the story would have been different.

His blazing 62 not out helped Chennai Super Kings post 191 runs on the board while losing just 4 wickets. In fact, CSK were 154-4 in the 19th over and it was Jadeja’s final-over antics that led to the big score.

The Indian all-rounder hit 37 runs in the final six balls of the inning, blasting five sixes – one on a no-ball, and one four.

Meanwhile, Bangalore’s bowlers had a day to forget with a majority of them going for an economy of over 8.00. Virat Kohli used seven bowlers available at his disposal but that didn’t help much.

Harshal Patel was the RCB’s leading wicket-taker with 3 wickets and was also the most expensive, conceding 51 runs in his spell.

Chasing a big target of 192 runs, RCB were under pressure right from the beginning. Kohli and Devdutt Padikkal helped RCB get to a decent start before the former got out in single digits.

Royal Challengers Bangalore were 44-1 in 3.1 overs when their skipper got out – that was, unfortunately, the beginning of the end for them.

Shardul Thakur and Sam Curran saw to the wickets of the above two players before Jadeja and Imran Tahir took over.

Jadeja got the crucial wickets of Washington Sundar, AB de Villiers, and Glenn Maxwell, thus squashing any hopes of RCB reaching the target. Maxwell tried to put up a fight with his 22 off 15 but under a climbing asking run-rate, he succumbed under pressure.

Tahir got the wickets of Patel and Navdeep Saini. Bangalore’s entire batting order tumbled like dominos, leaving them at 103-9 in 16.3 overs. By the 20th over, they were at 122-9.

That win for Chennai Super Kings means they now share 8 points with Bangalore. However, owing to a superior net run rate, they lead the table.