India T20 World Cup Squad: Who shone and who flopped against South Africa? 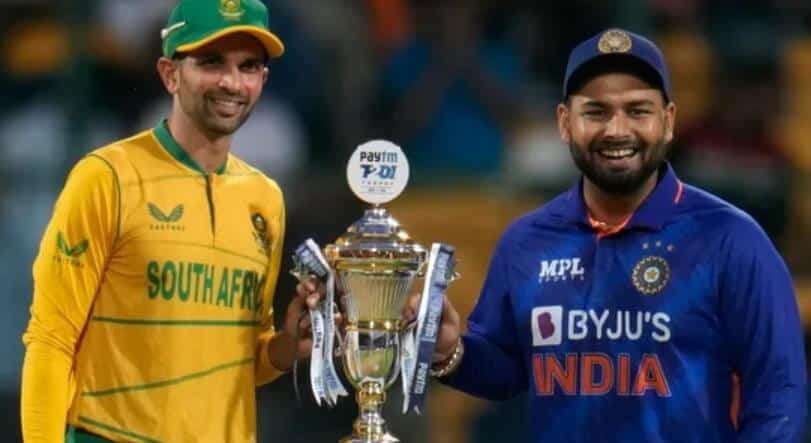 In the end they all just shook hands, accepted the 2-2 drawn Series after rain washed out the fifth and final game of the T20 Series at Bangalore, and moved on.

But with four completed games in the Series after India recovered from 2-0 down to be level at 2-2 going into the decider, which India players have improved their chances of being on the plane to the 2022 WC?

And which have done more harm than good to their chances?

It’s been a tough few months for Ishan Kishan.

The most expensive player at the IPL auction after being re-bought by Mumbai, he was part of an Indians side that flopped at IPL 2022 and inevitably it affected his own form with the bat.

Two fifties in five games is always a fine effort and those fifties came at strike rates of 158 and 154 respectively, so at lightning pace.

At the moment he’s still behind Rohit Sharma and KL Rahul in the pecking order for the opener’s slot but his performances will have caught the Selectors’ eye.

Dinesh Karthik- Finisher at his finest

The finisher role- batting at six or seven with a view to making the most of the ‘death overs’- is a very specialised one.

Batting first you’re looking for as many ‘death over’ boundaries as possible, batting second you’re looking to get your side home, knowing the target you’re chasing.

So it’s just the nature of playing that role that sometimes you don’t come into the game much, if you’re not needed, because your side hasn’t lost many wickets.

And that was the case in this Series with Karthik. In games one and three he only faced a few balls because he came in at the end of the innings. And in game five he didn’t bat at all, with the game washed out.

But look at his impact in games two and four.

That knock was ultimately the difference between the two teams and won him the man-of-the-match award.

India need to make sure he plays at the World Cup because he’s the best finisher they’ve got.

Some may have felt that Bhuvi Kumar’s time was gone for India in T20Is.

With strong IPL performances by the likes of Umran Malik, Avesh Khan, Mohsin Khan and Harshal Patel, plus the likes of Jasprit Bumrah and Mohammed Shami still around, Bhuvi was looking like he may not play for India so much anymore.

But the SRH man ended up being the Player of the Series.

He didn’t get off to the best start with 1-43 in the first match as India lost, but he hit back.

He was then excellent with 4/13 in game two, which they also ended up losing.

And then he was brilliantly economical in game three with 1/20, before going for just eight runs in two overs in game four. Both contributions were essential in India’s wins.

His ability to swing the new ball and then come back and bowl two overs at the death is as valuable now as it’s ever been.

If you ever wanted evidence that a year is a long time in cricket, then look no further than Rishabh Pant.

A year ago he was in excellent touch in all formats and had just been promoted to skipper of the Delhi Capitals in the absence of the injured Shreyas Iyer.

He wasn’t in quite the same form in Tests and ODIs as this time last year but it’s in T20 that he’s really struggled.

He had a lean season with Delhi in 2022, who failed to make the Playoffs, and at times his captaincy came under scrutiny.

But with Virat Kohli having resigned theT20 captaincy, regular skipper Rohit Sharma rested and vice-captain KL Rahul injured, he was handed the captaincy for this Series against South Africa.

If his captaincy was just about ok, his batting certainly wasn’t.

Coming in at the all-important number four spot, he managed scores of just 29, 5, 6 and 17 in the four completed games.

That’s just not good enough with the likes of Shreyas Iyer, Sky Yadav and Sanju Samson (plus of course, Kohli) around to play in that middle-order.

Given he’s not captain for India and that the likes of Ishan Kishan and Dinesh Karthik can keep wicket, and you can see why Pant may be deemed surplus to requirements.

He’ll need to find some runs sooner rather than later if he’s to make India’s XI at the World Cup.

Ruturaj Gaikwad- International cricket proving to be a challenge

The game of cricket is littered with players who can perform in domestic cricket year after year but struggle to take the step up at international level.

Let’s hope that isn’t the story with Gaikwad.

Last year he was the IPL Orange Cap winner as CSK won the IPL yet again and this time round, despite CSK not making the Playoffs, he at least top-scored for Chennai again across the whole season.

But what he can do for Chennai, he can’t seem to do for India.

Across eight matches in his T20I career so far, he’s scored just the one international fifty, a fine 57 in the third game of the Series just gone by against South Africa.

His four other scores in the Series were 23, 1, 5 and 10, proof that he just hasn’t got going away from the IPL and this despite batting in the easiest place to get runs: at the top of the order.

To make matters worse, Rohit Sharma, Kishan and KL Rahul are all opening batsmen who were ahead of Gaikwad in the Selectors’ minds anyway.

So with Rohit and Rahul absent, this really was a missed opportunity for Gaikwad.

We’ll have to wait and see if he gets another chance but at least he’s in the squad to play Ireland in Ireland next month, in a two-match T20I Series.

We’ll have to wait and see which of Kishan, Kumar, Karthik, Pant and Gaikwad make the plane to Australia but here’s what we do know: India are favourites to win the T20 World Cup, at odds of 4.0 with 10CRIC.

This is the same India who failed to make the semi-finals last time out, crashed out in the semis to the West Indies in 2016 and has only ever made two finals, one of which they lost.

Whether India go deep or have another tournament to forget may well depend on whether they pick the right players going forward.