Another match to look at in terms of T20 World Cup betting as the preliminary stage continues. That means we’ll have some analysis of the teams, a look at their likely XIs and some stats, to go with our chosen bets for anyone looking for live cricket satta rates at Indian sites!

This game will take place at Al Amerat on Wednesday, October 20, start time 3:30 pm IST. Find the best Namibia vs Netherlands betting tips and predictions below.

Let’s move on to the top cricket betting tips ahead of this one. Both teams are fresh from Monday defeats but of the two, it’s the Netherlands who most look to have the ability to bounce back. They just had a bad day at the office and are better than the scorecard suggests in that defeat to Ireland. So the Netherlands it is.

I’ll also tell you who I think might win the toss.

Things haven’t started well for Namibia. They suffered an extremely heavy defeat at the hands of Sri Lanka, being bowled out for just 96. It’s true that this hasn’t been an easy wicket but to not even get to 100 is a pretty poor effort.

Especially when you consider that this isn’t a vintage Sri Lanka side. Sri Lanka chased that with 14.5 overs to spare.

Their main man is the experienced David Wiese, who used to play for South Africa and has played endless T20 franchise cricket over the years. But he can’t do it all by himself.

What do we make of the Netherlands’ effort against Ireland? Well, the truth of the matter is that the match was decided by just one over. And unfortunately for the Dutch, it was an over that simply couldn’t have gone any worse for them.

They were on course to post around 130 when Irish bowler Curtis Campher took four wickets in four balls. As if that wasn’t bad enough, that included the wickets of experienced pair Ryan ten Doeschate and Roelof van der Merwe.

With those two gone it became a struggle, they posted just 106 and never had a chance of defending that. But they should be far more competitive this time round.

We’re at Al Amerat for this one. Four matches have so far seen a high score of 140 (Scotland) while as we’ve seen, Namibia fell for less than 100.  So it’s a tacky, sticky, uneven wicket where it’s hard to get in and even then, hard to score too freely.

Three of the four have been won by the chasing side so that seems the way to go. At least that way you know what you need. Check out our Oman Cricket Academy betting guide for more on this venue!

Let’s have a look at the very brief head-to-head between Namibia and the Netherlands. The two sides have played each other 3 times before in T20Is, of which the Netherlands have won 2. So, this is mainly why I am backing them to win again. 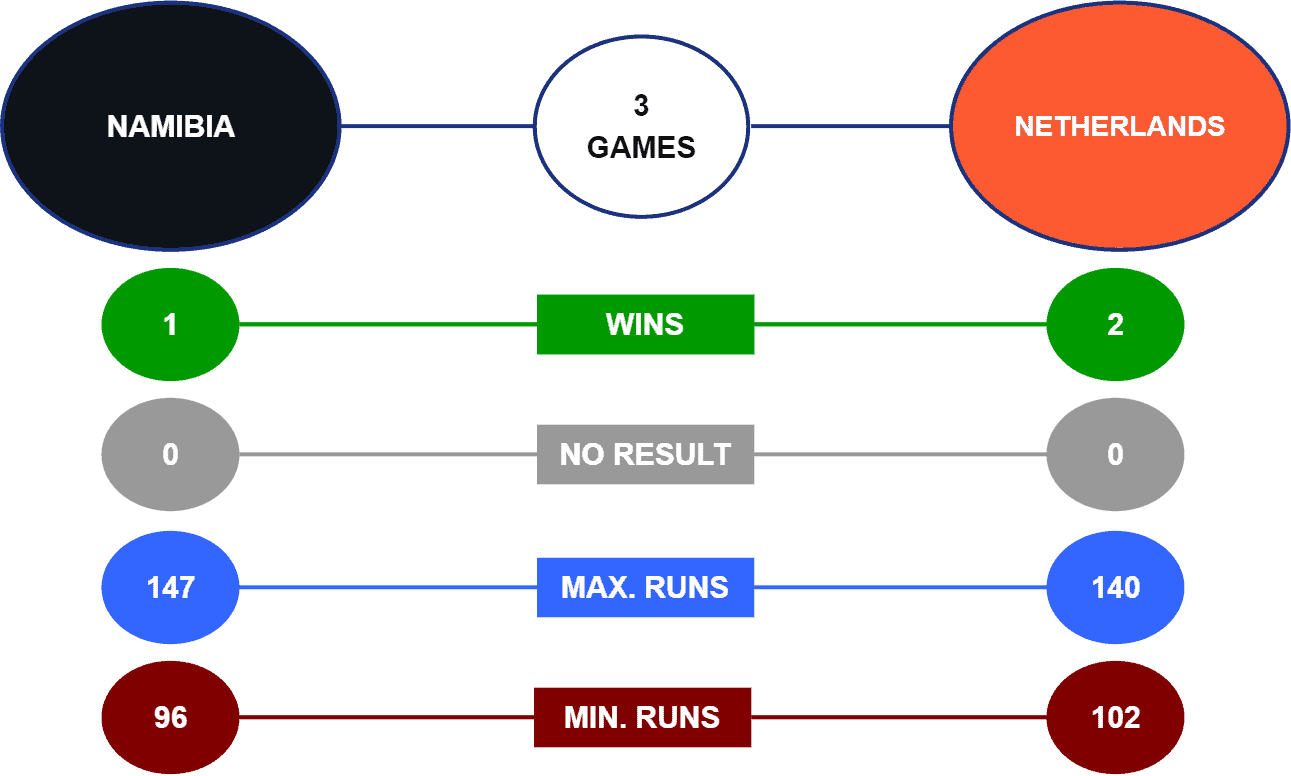 Shall we look at some Namibia v Netherlands toss winner stats? Let’s do it. The Netherlands have won two of those three tosses. The Netherlands won the toss against Ireland, while Namibia lost it against Sri Lanka. So all things point to the Dutch being a bit luckier at the toss.

Recommended Bet: Back Netherlands to win @ 1.5 with Pure Win

The last time these two played each other, two years ago, the Netherlands won pretty easily.  They dismissed Namibia for 96 (sound familiar?) after posting 140 themselves. So that was a serious beating.

They’re 2-1 ahead on T20Is in the three games they’ve played each other and the suspicion is that one over against Ireland was just a freak occurrence and that they’re better than that performance suggested.

This may be a bit closer than the odds suggest but the Netherlands are the best bet, quite simply, as the better all-around team. Make sure to check out our Pure Win review for more on this top betting site.