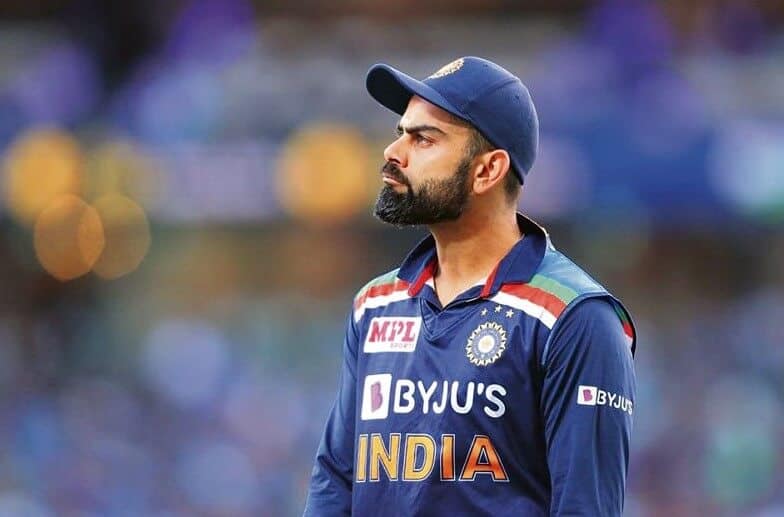 Virat Kohli may still be right up there as one of the most feared and respected batsmen in world cricket but he certainly didn’t have it all his own way over the last 12 months or so.

Here’s why he’ll look back at this last year as one of regrets, near-misses and other things that just didn’t go his way.

Paternity leave means Kohli returns home from Down Under

Few things are as important in a man’s life as the birth of their first child. But in Kohli’s case, it didn’t exactly come at the most convenient of times.

In January 2021, India had just lost the first of a four-Test series in Australia, defeat coming at Adelaide.

After the match, Kohli flew home to attend the birth of his first child, with vice-captain Ajinkya Rahane taking over as skipper.

Rahane led India to a win the Second Test in Melbourne, where he was man-of-the-match after a game-turning century.

In the Third, they played out a draw after rain deprived Day One of 35 overs of play.

But India secured a superb win in the Fourth Test at Brisbane, chasing 328 mostly thanks to a mesmerising unbeaten 89 from Rishabh Pant.

It was Australia’s first defeat at Brisbane in 32 years and the first time an Asian side had ever won a Test there.

As India secured a memorable Test and Series win, Kohli was back in India.

In February-March 2021, India secured a 3-1 Series win against England in India, after the tourists took the First Test.

So it was another feather in Kohli’s cap to win yet another Series as captain.

But his contributions as a player weren’t particularly eye-catching.

Across four Tests, he scored ‘just’ 172 runs including two fifties, at an average of 28.

Not bad, but it paled in comparison to some of the other Indian batsmen’s efforts.

Rohit Sharma scored 345 runs in the Series and keeper/batsman Pant got 270; each got a century and Pant also hit two fifties.

Perhaps most surprisingly,  Kohli was outscored by Ravi Ashwin, an off-spinner by trade who is at best, a bowling all-rounder. Ashwin scored 189 runs in the Series, 17 more than Kohli.

Yes, India had secured another Series win and priceless WTC points but other players had made their mark more than the skipper.

Many of their attempts were under Kohli as captain. Nevertheless, his decision to give up the RCB captaincy midway through the IPL season took many by surprise.

He explained his decision by saying there was too big a workload to the role and that he’d rather just stay on as a batsman rather than juggle the extra RCB responsibilities with everything else on his plate.

But could he end his tenure as RCB skipper by winning the IPL at last?

Sadly not. After a strong start to the campaign, they finished third and in a do-or–die game against KKR in the Eliminator, posted just 138/7 batting first.

Kohli did admittedly top score with 39.

KKR made a meal out of the chase, only getting home with two balls to spare. But it was enough to send RCB crashing out and made sure they weren’t going to win their first-ever IPL with Kohli in charge.

In between the first and second halves of the 2021 IPL (interrupted because of Covid) India travelled to England to play a five-Test series.

There were plenty of rain interruptions in the First Test at Trent Bridge, too many to secure a result, the match somewhat inevitably ending in a draw.

In the Second Test at Lords, a KL Rahul century was essential to India getting a strong first innings total, though a superb unbeaten 180 from Joe Root was even better than Rahul’s effort.

England hit back at Headingley to level the Series after yet another Root century, though it was Ollie Robinson who was man of the match after taking seven wickets.

But it was all India at The Oval.

An excellent all-round performance from Shardul Thakur and a second innings century for Rohit Sharma were too good for England, India winning by a margin of 157 runs to go 2-1 up.

Going into the deciding match at Edgbaston it was very much advantage India. Not just because they were 2-1 up and just in need of a draw to win the Series.

But also because they were playing by far the better cricket.

But on the eve of the match, there was an outbreak of Covid in the India camp. With the likes of Kohli, Pant, Sharma and Jadeja all big IPL stars, as well as Test stars, and the second half of the 2021 IPL about to start, the BCCI decided to not play the Fifth Test.

Thus robbing Kohli and India of a unique chance to win a Series in England.

As it happens, the Fifth Test will eventually be played in the summer of 2022 and India may well even win it. But it won’t be quite the same.

Similar to what happened at RCB, Kohli announced he was stepping down as T20 captain of India after the World Cup.

In their first match they were on the wrong side of the toss and lost to Pakistan, India’s first-ever loss to their rivals at a World Cup.

Their second went the same way. Again they batted first, this time against New Zealand, again they lost convincingly.

As it happens, they won all of their remaining matches but it was all too little, too late.

Kohli’s last gig as T20 captain for his country had ended practically before it had started.

Ahead of a tour to South Africa in late December, the BCCI announced that they were replacing Kohli with Rohit Sharma as ODI skipper, the man they had already selected to take over from Kohli in T20Is.

The thinking was that they wanted the same man in charge for both forms of white-ball cricket.

But what followed was anything but straightforward.

BCCI President Sourav Ganguly suggested they had tried to talk Kohli out of stepping down as T20I captain.

Kohli said no such conversation ever took place and that at no stage had it crossed his mind that a) he wanted to give up the ODI captaincy or that b) resigning as T20 skipper would lead to him being removed as ODI skipper.

But there was no going back and Kohli is now ‘only’ a player when it comes to white-ball cricket.