UEFA Euro 2020 Round of 16: Wales vs Denmark Betting Tips & Predictions Wales and Denmark will face off in the Round of 16 of the European Championship 2020.

Before we get started, be sure to check out our leading online football betting sites in India where you will find great odds and diverse markets.

This is an evenly matched fixture that can very well go either way. Wales are looking to repeat their semifinal run from the last Euros while Denmark got through to the round of 16 despite losing their opening two group games.

For us, Wales will start as the favourites despite being the underdogs on the odds front. Denmark will put up a good fight and keep things interesting until the very end. 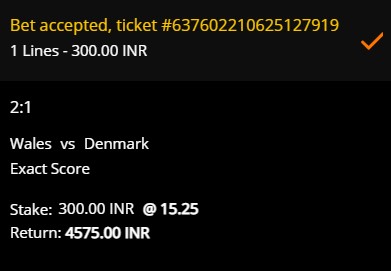 Wales have enjoyed a pretty respectable campaign in the Euro 2020 so far. Rob Page inspired the boys to draw Switzerland 1-1 and beat Turkey 2-0 to keep their prospects alive.

A 1-0 loss to Italy in the final group match may have seemed inevitable but Wales headed into that fixture knowing that a second-place finish was sealed.

Playing in just their second European tournament, Wales are looking to reach the semifinal once again. In all fairness, it is not entirely impossible for them to pull this off. Should they beat Denmark, they will face the winner of the Netherlands-Czech Republic match.

Page rotated the squad in the game against Italy, giving his key players some well-deserved resting time. Moreover, Wales have not lost successive matches since the Euro qualifiers in 2019.

For this game, we can expect Page to resort to his strongest starting XI, especially with no injuries in sight.

Denmark made history by becoming the first team in the European Championship to reach the knockouts after losing their first two opening matches.

In many ways, they deserve this feat following the horrific events in the opening game against Finland, which saw their teammate Christian Eriksen collapsing and then being resuscitated on the field.

The Danes, still battling with what had transpired, moved on to lose 1-0 to Finland and 2-1 to Belgium. However, in their final group game, they beat Russia 4-1 in an emphatic fashion to pick up the three points and qualify on account of a superior goal difference. It is as if Denmark suddenly woke up and decided to turn it all around.

Now, Denmark will look to build on that momentum. This is the first time they have made it past the group stage in the Euros since 2004 – back then, they reached as far as the quarters.

None of their 10 international meetings has ended in a draw. Denmark lead 6-4, having won three of their last four meetings. 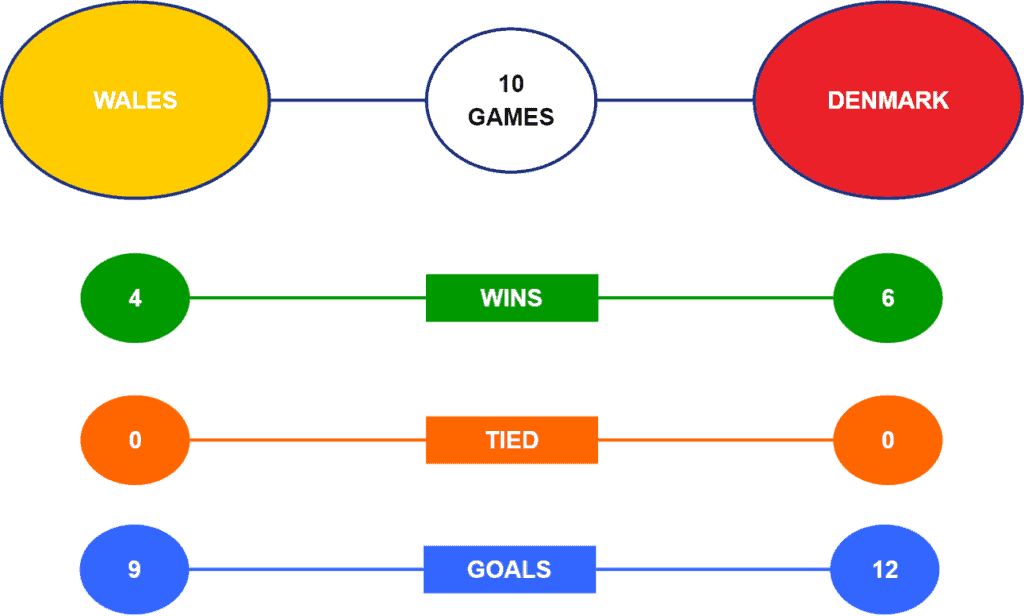 Recommended Bet: Back Wales to win @ 5.25 with Casumo

Gareth Bale and co. hold a superior pedigree in Euros, having made it to the semis in the last edition. Five years on, they have a chance to do so again and by all means, they have a pretty capable squad of pulling this feat.

However, given the way Denmark played against Russia, Wales will need to be cautious of the threat they carry. Plus, Denmark have a feel-good story of making it to the round of 16 despite enduring the crisis at the start of the tournament. They will be the favourites for the neutrals.

If it is any consolation, Wales had only lost to England, France, and Belgium in the last couple of years before the summer tournament. They have also been slightly more consistent in their overall performance and the fact that they are available at such high odds makes the bet more exciting.

Bale to be Anytime Goalscorer

Recommended Bet: Bale to be anytime goalscorer @ 3.80 with Betway

Gareth Bale may have had a muted campaign in Euros so far but the expectations will be high from him to lead and inspire. He is set to start on Saturday and will play a good number of minutes. Given the odds at which he is available, he certainly makes for a decent bet.

Denmark are riding the momentum wave after the Russia win while Wales will fortify their defences to accommodate this new threat. We can expect plenty of chances from both sides and a few goals as well. None of their past few meetings has ever disappointed and chances are, neither will this.

Expect a good game of football with goals from both sides.