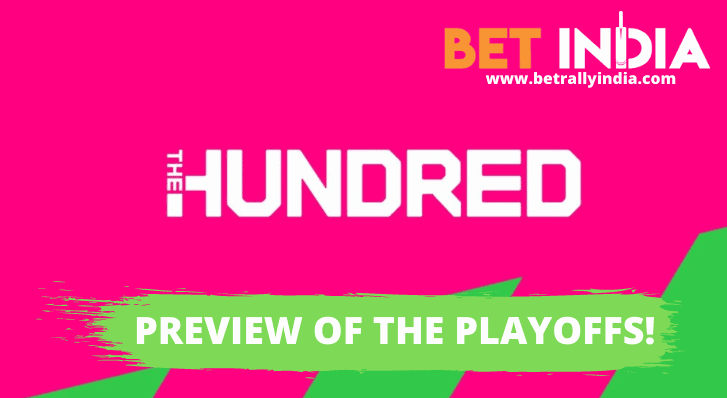 And then there were three. After almost a month of wonderfully entertaining cricket at The Hundred, English cricket’s brand new cricket tournament, we now know which sides are in the Playoffs.

Here’s what you need to know ahead of them.

At the start of the tournament, not many would have fancied Birmingham. Not many fancied them to make the Playoffs and not only have they done that but they actually topped the Group Stages table.

They secured six wins from eight games, their win over the Northern Superchargers on Tuesday meaning they can’t be caught at the top. And that’s worth gold dust because it means they’re instantly in the final rather than having to contest a semi-final.

No wonder Betway make them the 1.85 favourites to win the inaugural edition of the Hundred given they only need to win one more game, rather than two. The reason they weren’t so fancied was the absence of star names.

Overseas spinner Imran Tahir is 42 years old and Kiwi bowler Adam Milne rarely plays for his country these days. Their third overseas player, West Indies man Fabien Allen, is an excellent player but rarely talked about in the same breath as a Kieron Pollard or Andre Russell.

From among the English players, there are some good county pros there like Benny Howell and Daniel Bell-Drummond but as we say, it ‘s not a team full of big-name players with big egos.

They did however have three real heroes in the camp.

In six games for them, skipper Moeen Ali scored 189 runs at a remarkable strike rate of 154, while also taking four wickets.

He led the side well, too. It’s a monumental blow to the Phoenix that he’s likely to miss the final after being called up to England’s Test team. After their defeat to India on Monday, it’s pretty unlikely he’ll be released to play that one game.

Kiwi paceman Adam Milne has been superb. 10 wickets in just six games (remember this format is even shorter than T20 cricket) tells its own story and he’s been going at an incredible rate of just 1.05 runs a ball.

Just the sort of form that got him recalled for New Zealand for the T20 World Cup, though he will travel as the reserve 16th man and only play if someone gets injured. Best of all, there was Liam Livingstone, an outstanding candidate for Player of the Tournament.

With 302 runs so far, he’s almost 100 clear of the next best and is striking at 171. He’s hit three fifties, plus the highest individual score of the tournament with 92 not out. His 23 sixes are many, many more than anyone else has managed. Curiously, Ali is next on the list with 12.

Did we mention Livingstone has taken four wickets? We have now.

The Southern Brave did things a bit different but were deserving of second spot in the table. South African opener Quinton de Kock is a T20 superstar, Kiwi Devon Conway has had a great year and Chris Jordan is, after all, England’s record wicket-taker in T20Is.

They’re well captained by the experienced James Vince, who for good measure was man of the match in both the semi-final and final of the Big Bash this year. Those three have all been excellent.

As have some lesser known names. Alex Davies has scored 172 runs, while JB Lintott has taken 10 wickets in seven games.

The big disappointment however has been Colin de Grandhomme. The New Zealand all-rounder just hasn’t got going with either bat or ball and the Brave can be forgiven for thinking they’re not getting their money’s worth with him.

Completing the trio are the Trent Rockets, which should come as no surprise to anyone. That’s because they have arguably the strongest squad of anyone.

We all know Rasid Khan is probably the best T20 bowler in the world. Or that Alex Hales is a class act who can destroy any bowling attack.

And that Dawid Malan is currently ranked the Number 1 T20I batsman in the world. D’Arcy Short is a Big Bash star and Samit Patel has been one of the most reliable all-rounders in county cricket for the best part of 15 years.

Much was expected of all those players and they’ve all delivered. But perhaps the secret to their success has been the fact that everyone has contributed at one stage or another, so it’s been a real team effort.

Brave and Rockets impossible to split

Southern Brave and Trent Rockets will play each other on Friday in the Eliminator, which is basically a semi-final. Winner from that one obviously goes to the final.

Betway can’t split the two teams and make them both 3.8 to go on and win the competition.