Why We’re Loving The Hundred! 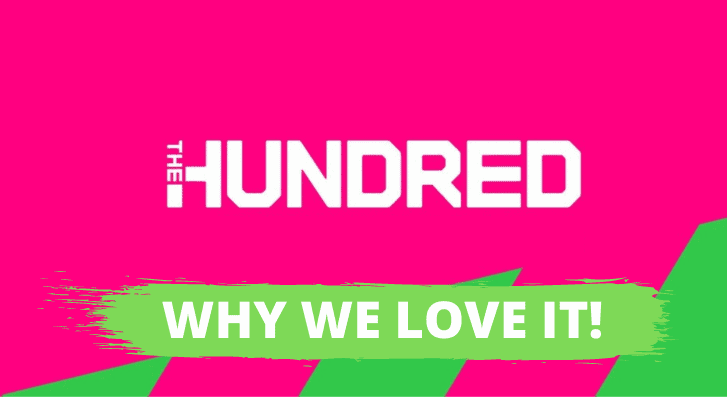 We’re now a week and eight games into The Hundred, with each of the eight sides having played twice.  It’s early days yet in terms of getting my head around it and how best to go about it when it comes to online cricket betting on it.

But here’s what I do know about why I think it’s a great breath of fresh air for the English domestic game and why it’s likely to be a big hit. Not just this year, but for the foreseeable future.

Stating the obvious here but the fact a game is 40 balls shorter than one of T20 actually makes a considerable difference.

I’m not advocating that it’s a case of ‘the shorter the better’ when it comes to cricket. Five-day Test cricket will always be the purest and most important form of the game.

But those 40 balls reduce the time of the game by about 45 minutes and that means the game is over and done with in less than three hours.

That’s not only good for the cricket fan with limited time, but also those who are betting on the Hundred can collect on their winning bets earlier.

And it needs to be. Because fielding sides who take too long to bowl their first 80 balls or so get penalised by having to bring one extra fielder into the circle for the final overs.

That could really cost them, especially with a set batsman in, as there will be one less fielder to cut off boundaries.

As a result, everything is done quicker. Such as a change in field, or simply how quickly the bowler takes between bowling two deliveries.

A rare chance to see the England stars

It’s one of the worst-kept secrets of cricket that fans of county cricket hardly ever get to see the England men in action because they hardly ever play domestic cricket at all.

Maybe James Anderson plays a few First Class games to keep his fitness up and some of the limited-overs players may occasionally turn out for a one-off game, but it’s rare.

Yes, we all get to see them on TV, but it’s not quite the same.

Nor do English fans often have the opportunity to go and watch a live England game because it would probably have to be staged in their home city for it to be practical.

Over the last week, fans got to see Test skipper Joe Root, ODI and T20 captain Eoin Morgan, superstar batters Jos Buttler and Jonny Bairstow, the brilliant all-rounder that is Ben Stokes, the big-hitting Moeen Ali, spin king Adil Rashid and both Curran brothers: Sam and Tom. To name but a few.

Yes, most of those will soon report for England duty rather than carrying on playing in The Hundred. But the players can say they were a part of it and the fans can say they saw all the big England stars in action.

The overseas stars aren’t too bad, either

It’s a shame that the likes of Virat Kohli, Rohit Sharma and Ravindra Jadeja won’t be playing there anytime soon, because the BCCI doesn’t want a serious rival to the IPL featuring Indian players.

And I also know that a few big names like Glenn Maxwell, Sandeep Lamichhane and Faf du Plessis were meant to play and didn’t as a result of international commitments, VISA issues and concussion respectively.

But let’s look at who is playing.

London Spirit’s Mohammad Amir is one of the world’s best white-ball bowlers. Rashid Khan of the Trent Rockets was recently voted the best T20 player of the decade.

Carlos Brathwaite of the Manchester Originals smashed four sixes in a row to win a T20 World Cup final.

The Southern Brave’s Quinton de Kock is arguably the best T20 opener in the world.

You get the picture.

T20 is now 17 years old. So players, coaches, bookies and gamblers have had plenty of time to get their heads around the 120-ball game over the years. There’s not much that’s new about T20 betting anymore.

But what about a 100-ball game? We’ve already seen batsmen like De Kock hitting the first ball of the innings for six in The Hundred, something he rarely does even in T20 cricket.

If players need to adapt, then so do we as gamblers. We need to re-think the game and how best to bet on it. If we can work it all out before the betting sites such as 10CRIC or Bollybet do, we could have a huge edge over them!

Personally, I don’t like Kevin Pietersen. There, I’ve said it. I didn’t like his attitude as a player, nor do I like him as a commentator.

But as one of T20’s first big stars and a brilliantly aggressive batsmen, he knows the game.

More to the point, he’s joined by a load of top-class commentators who I do really like and respect. Like Michael Atherton, Nasser Hussain, Wasim Akram, Stuart Broad, Kumar Sangakarra and Mel Jones.

And the coverage is excellent. The stats are insightful, the camerawork excellent, and the extra graphics really bring something to the table. When you watch a game of The Hundred on TV, you’re certainly in good hands.

Keep an eye on our dedicated cricket betting tips where we’re previewing every match, complete with the best betting tips in India!