The final of the 2021 UEFA Champions League will feature the English giants Manchester City and Chelsea face off for the prestigious title.

On one side, there is Pep Guardiola who is looking to win his first Champions League trophy since his Barcelona days, and the first one for the Citizens. The boys are aiming for a treble, having won the Premier League and the Carabao Cup this season.

On the other, there is Chelsea led by Thomas Tuchel who are looking to cap a pretty uneventful season with a big win in Portugal. Both sides are evenly matched and this can very well go either way.

However, I am going to back Manchester City on this one, given their slightly superior squad, a prolific manager, and the fact that this is Sergio Aguero’s last game with City and he will be keen on winning the big one. All of the best Man City vs Chelsea betting predictions and odds from the best football betting sites can be found below. 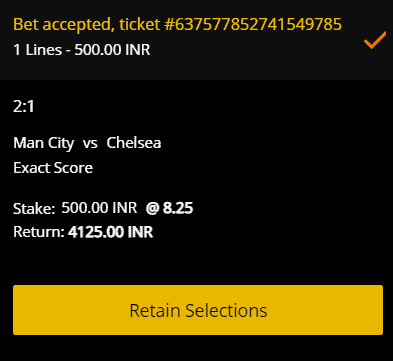 Manchester City have won the Premier League and the Carabao Cup this season and are looking absolutely phenomenal at the moment.

Barring a shock 3-2 defeat to Brighton in their second-last EPL game, the boys bounced back in style to close the season with a 5-0 thumping of Everton.

Aguero had a dream farewell having scored two goals from coming off the bench in his final league game for City. The fact that he is firing on all cylinders only means good news for Manchester City fans.

Additionally, there are no injury concerns for the City with Ilkay Gundogan given a clean bill of health. All in all, Guardiola has carte blanche to pick his dream playing XI without any restrictions.

As for their overall form, City have not drawn a single game since mid-December; since then, they have won 35 matches while losing just 5. Interestingly, two of those five losses came to Chelsea.

Looking only at their Champions League run, Guardiola remains unbeaten in the European Cup this season (11 wins, 1 draw).

Unlike their rivals who ended the season on a positive note, Chelsea’s form in the last few matchdays has taken a sharp drop.

With three losses in their last five matches across all competitions, many are left wondering if the Blues can recover from this setback and get the big one.

It all started with a 1-0 loss to Arsenal at home in the Premier League, followed by the defeat to Leicester City in the FA Cup final by the same score. Even though they did avenge that defeat by beating the Foxes 2-1 in the league, it wasn’t quite enough.

In their last game of the season, Chelsea lost to the 11th placed Aston Villa by 2-1 away from home. That defeat meant a fourth-place finish for the Blues (could have been third had they won that match against Villa).

Moreover, there is some cause for concern for Tuchel as N’Golo Kante and Edouard Mendy remain in doubt to start on Saturday. They are flying to Porto and were in training mid-week but it is yet to be seen if they will be fit to start.

Mendy has been crucial in Chelsea’s success in the Champions League this season with eight clean sheets in his 11 appearances. He is one of the key players in this fixture who can very well decide the outcome.

Chelsea have enjoyed the better of this fixture through the years, including this season. Chelsea lead City with a healthy margin in the head-to-head tally.

In the current season, the two teams have met thrice – City won 3-1 in London (before Tuchel took over for the Blues) but lost to Chelsea at home by 2-1 and in the FA Cup by 1-0.

As for their meeting in the European Cup, they have met just once – in the 1970/71 European Cup Winners’ Cup. Chelsea won both legs by a 1-0 score to reach the final, where they beat Real Madrid to conquer the tournament.

What about meetings between Pep Guardiola and Thomas Tuchel?

Before meeting in the Premier League, Guardiola and Tuchel had crossed paths in the Bundesliga when the Spaniard was working with Bayern Munich while Tuchel was managing Mainz 05 and later, Borussia Dortmund.

As expected, Guardiola’s Bayern Munich went unbeaten against both of Tuchel’s clubs. In the five times they met in German football competitions, four games ended in a win for Pep while just one ended in a draw.

This season, however, the German manager has done a superb job of evening the field with two wins over Guardiola’s City.

Recommended Bet: Back City to win @ 1.90 with Casumo

Keeping aside the two losses to Chelsea in the last few weeks – which may very well prove to be Chelsea’s saving grace for this fixture – Manchester City have looked absolutely flawless throughout the season.

With just seven defeats and six draws since the start of the football season in September 2020, City have more than made their case as to why they deserve to be the European Champions.

Their strikers have been just as brilliant throughout – Gundogan is the leading goalscorer for the team in the league with 13 goals, followed by Raheem Sterling with 10. In terms of assists, Kevin de Bruyne takes the cake with 12 followed by Sterling and Bernardo Silva.

Chelsea, on the other hand, have fumbled dramatically in the past few matchdays. Add to the equation their injury concerns, it becomes more obvious why City are the favourites here.

But that isn’t to say that the Blues will not put up a good fight. They do have the necessary talent within their ranks to win the Champions League final, it is just that they will need to work really, really hard.

Plus, Guardiola is a skilled tactician who will look to conquer the famed treble and finally win the elusive title. No matter how I look at it, Manchester City come out on top – whether it is their players, recent form, or tactical prowess.

Over 2.5 goals in the match, Both Teams to Score

Manchester City have had a superb goal-scoring run this season. Their strikers are in a prime form and will more than likely score a couple at least against Chelsea, especially when we consider that revenge is on the cards for them.

As for the Blues, they have the talent and skillset to deal a few blows to City’s defence too – after all, they have proven it twice already.

Combine the two and I can safely assume that there will see goals from both teams, the count of which may very well be over 2.5.

Aguero to be Anytime Goalscorer

Recommended Bet: Back Aguero to be anytime goalscorer @ 2.87 with Betway

Sergio Aguero is set to bid farewell to Manchester City; he scored a brace in his final Premier League game and if given a chance, he will do so again.

While he may not start in the final, he is bound to come off the bench as a super-sub to leave his impact on the game and give his fans the perfect goodbye gift. And the fact that he is available at such great odds makes us want to go with this bet even more.