ATK Mohun Bagan will enter the Indian Super League 2020-21 as a powerhouse of two of the strongest teams in the Indian football.

Atletico de Kolkata – also known as ATK – are the most successful team in the ISL.

They have now merged with Mohun Bagan – one of the most successful teams in the I-League, to form ATK Mohun Bagan.

The club will now don a new jersey in the league and will field what is one of the strongest squads, at least on paper.

Even from the ISL betting perspective, they are likely to be among the favourites to win the league.

Where to bet on ATK Mohun Bagan

There are still no odds for ATK Mohun Bagan to win the ISL yet.

That said, when it comes to individual match betting, we have found the best odds for ATK Mohun Bagan at 10CRIC.

The odds offered are a great price, especially considering the strong squad, history, and league titles that ATK Mohun Bagan can boast of.

For a team as strong as this, to get the match odds at such an attractive price makes it one of the few value bets that you can place over the course of your Indian Super League betting.

In other words, it is one of the few operators that are likely to provide best odds on ATK Mohun Bagan to win the league or their respective matches.

Right off the bat, we are going to cover every single match that ATK Mohun Bagan will play in the ISL this season.

We will analyse each match to give you the best betting tips and predictions so you can continue to make healthy profits in football betting.

You can also check out our quick Payment Guide on how to make a deposit with the operator.

Our Prediction for the Season: Top-3 Finish in the League Table 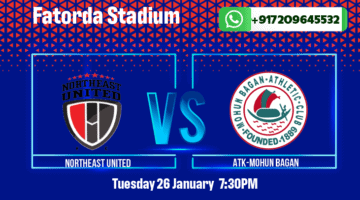 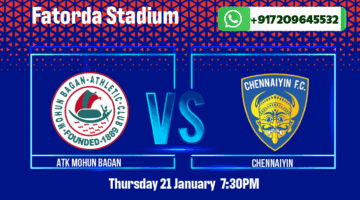 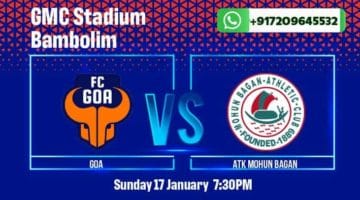 Atletico de Kolkata, prior to their merger with Mohun Bagan, won the ISL thrice, including last year.

ATK performed incredibly well in the ISL 2019-20, where they finished at the 2nd place in the league table with 34 points.

During their entire campaign, they lost only 4 games and scored as many as 33 goals – second only to FC Goa in both the regards.

Having qualified for the playoffs, they first defeated Bengaluru 3-2 on aggregate after losing the first leg with 1-0 and staging a comeback in the second.

In the final, they met Chennaiyin FC and moved past them with 3-1 to clinch their third ISL trophy.

Roy Krishna and David Williams were among the leading goalscorers for the side, scoring 15 and 7 goals respectively.

Defensively too, they were impressive as they conceded just 16 goals, trailing only behind Bengaluru FC. Arindam Bhattacharya kept 9 clean sheets for his side in the campaign – the second highest in the league.

It goes without saying that their performance in the last season will certainly aid their chances this year too.

Having retained a core of the team, including the likes of Krishna and the manager Antonio Lopez Habas, the side certainly looks formidable heading into this year’s ISL as well.

One interesting fact about ATK Mohun Bagan would be their strong legacy – whether it is in the I-League or the Indian Super League, they have got the best of both worlds.

Roy Krishna is likely to retain the captain’s armband for this season as well although he may have to share it with the likes of Edu Garcia, Pritam Kotal, Arindam Bhattacharya – the four players who won the league last season with the ISL.

Krishna, hailing from Fiji, has proven himself to be a driving force for the team and can single-handedly make a difference when need be. The 33-year-old has plenty of experience – much needed for someone at his position.

Looking at the preview of ATK Mohun Bagan, it is fair to say that they have got what is possibly one of the strongest teams in the Indian Super League this season.

They have not only retained the core essence that brought them the title last year, but they have also fortified their squad further with a few defensive signings.

By joining hands with the I-League giants, they hope to usher in a new era of dominance in the league.