For the second consecutive time in the Champions League, Real Madrid and Inter Milan have been placed in the same group alongside Shakhtar Donetsk.

Last year, Madrid came out unscathed in both ties against the Italians and are likely to maintain that rhythm. As for Inter Milan, they have the home advantage and will hope for better results this time around.

While a win for Madrid is certainly on the cards, I’m going to back Inter Milan for a win or draw here.

Inter Milan have made a solid start to defend their Serie A title, despite the departures of powerhouses like Antonio Conte and Romelu Lukaku.

Having won the Scudetto last season – a first such feat in over a decade – the Nerazzurri are looking to carry the same rhythm in Europe’s elite club competition.

Under Simone Inzaghi in Italy’s top-flight league this season, Inter Milan have picked up two wins and a draw in the three played. After a brilliant thumping of Genoa (4-0) and Verona (3-1), the boys were humbled by Sampdoria over the weekend with a 2-2 draw. The Nerazzurri were in lead twice but were pulled back both times by Sampdoria to share the spoils.

Nonetheless, they remain unbeaten in Serie A so far and will now turn their attention to the Champions League. The three-time champions (last winning the title in 2009-10 season) face their toughest test yet in Real Madrid. Despite boasting a decent record on home soil against the Los Galacticos, the fact remains that they have lost to them more often than not in the recent past.

As for player availability, Inzaghi will be without the services of Stefano Sensi while Alessandro Bastoni also remains a doubt. Apart from that, Inter are playing with a full-strength squad.

The 13-time Champions League winners Real Madrid need no introduction. Despite the increase in competition around them in the European Cup, they still remain among the favourites to go the distance although, it is not going to be easy.

But there is reason to be optimistic, notably with the fact that Carlo Ancelotti is managing the side once again. The veteran Italian manager has an impressive resume which includes the Champions League trophy with the Madridistas in the 2013-14 season.

Madrid sit at top of the La Liga table with 10 points from four matches (3W, 1D). Most recently, they played Celta de Vigo and thrashed them 5-2 – Karim Benzema scored a hat-trick while Vinicius Junior and Eduardo Camavingo also found their names on the goal sheet.

Semifinalists in the last year’s edition (they lost to Chelsea 3-1 on aggregate), Madrid certainly look primed to go deep in the tournament once again, especially given their excellent track record against Italian opposition in European competitions.

That said, Ancelotti will be without several of his key players like Gareth Bale, David Alaba, Toni Kroos, Marcelo, and Dani Ceballos. But even without them, there is sufficient talent in the ranks to get the job done.

Madrid hold a slim lead over Inter Milan across all their encounters with 9-8. They have also won their last three meetings against the Italians in all competitions.

As for their recent Champions League history, Madrid won the home leg in the group stage last season by 3-2 while in the reverse fixture, they trumped 2-0.

It is also worth mentioning that Inter have lost four of their last five matches to Real Madrid in European competitions. 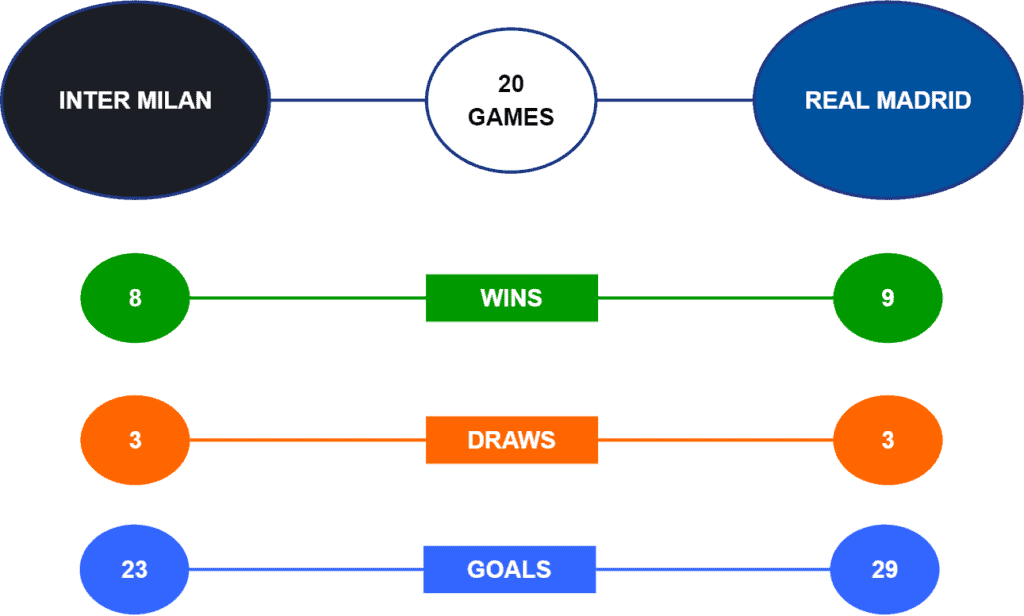 Recommended Bet: Back Inter Milan to win or draw @ 1.42 with 10CRIC

Real Madrid have history on their side in this competition; Inter Milan may still be reeling after the exit of Romelu Lukaku. On paper, the Spaniards will start as the favourites.

But the atmosphere at San Siro this season has been terrific – the fans will throw their weight to support the Nerazzurri. This newly inspired outfit will fancy their chances of a positive start; if not a win then at least a draw. Plus, Madrid are not at full strength with the absence of their several first-choice players.

All in all, Inter Milan have got a good opportunity here to strike an early blow and kickstart their Champions League campaign in the way it’s intended.

Karim Benzema to be anytime goalscorer

Recommended Bet: Benzema to be anytime goalscorer @ 2.15 with Betway

Benzema is heading into this match on the back of a stunning hat-trick against Celta Vigo past Sunday. The French forward is sailing high on confidence and continues to be a key playmaker for Real Madrid.

Given his absolute certainty in the starting XI, we can expect him to find the net on Wednesday evening as well.

Madrid’s attack may be solid but defensively, they aren’t that sharp this season. They have conceded six goals in their last four; Inter Milan by the same token have conceded three in as many matches.

Given the intensity of this fixture, we can expect both sides to not only concede but also score a few goals. In other words, this match has all the makings of being a goal-scoring affair.