More T20 World Cup betting is coming up as the preliminary stage comes to an end. This is a make-or-break game for both sides so is of vital importance. That means we’ll have some analysis of the teams, a look at their likely XIs and some stats, to go with our chosen bets for anyone interested in online cricket betting at Indian sites!

This game will take place at Sharjah on Friday, October 22, start time 3:30 pm IST. Find the best Namibia vs Ireland betting tips and predictions below.

Let’s move on to the top cricket betting tips ahead of this one. It’s all or nothing for both sides with a World Cup place at stake. The winner goes through, loser goes home. The winner should be Ireland. I’ll tell you the three reasons I think that’s the case.

But it’s Namibia who I believe will win the toss.

I said in the preview ahead of their last game against Netherlands that star man David Wiese couldn’t do it all by himself.

Well, he basically did.

He bowled decently to claim 1/32 off four overs but it was with the bat that he really showed his class. With Namibia in trouble in the chase, he came in and played with great freedom and aggression.

He scored 66 off 40 to get his side home with an over to spare. Skipper Gerhard Erasmus played his part too with a good 32 off 22.

Earlier Jan Frylinck took two wickets but was expensive, going at 9 an over.

But it was Wiese who really made it happen. The challenge is for others to step up and not just expect him to do it all over again.

The equation is simple: win and they go to the World Cup.

After a good win over the Netherlands, they were outclassed by Sri Lanka on Wednesday.

They made an excellent start, taking three early wickets, but let the Sri Lankan middle-order recover to post a big score. Chasing 172, they never looked on track to do so and lost by a big margin.

Maybe they should have given Paul Stirling at least another over.

His only one claimed the wicket of star man Kusal Perera and went for just four runs. Why didn’t he get another go?

This is the first match of the qualifying round to be played at Sharjah so we don’t have much to go on. Bat first or chase? Well, Namibia will probably be happier to chase after how it went for them against the Netherlands.

Ireland may decide to go the other way and bat first, try to get 150 and let scoreboard pressure do the rest. Check out our Sharjah Cricket Stadium betting guide for more on this venue!

Ireland are 5-1 up on the head to head over the years.  Curiously, Namibia won the first-ever T20 game between the two. But Ireland won the next five. 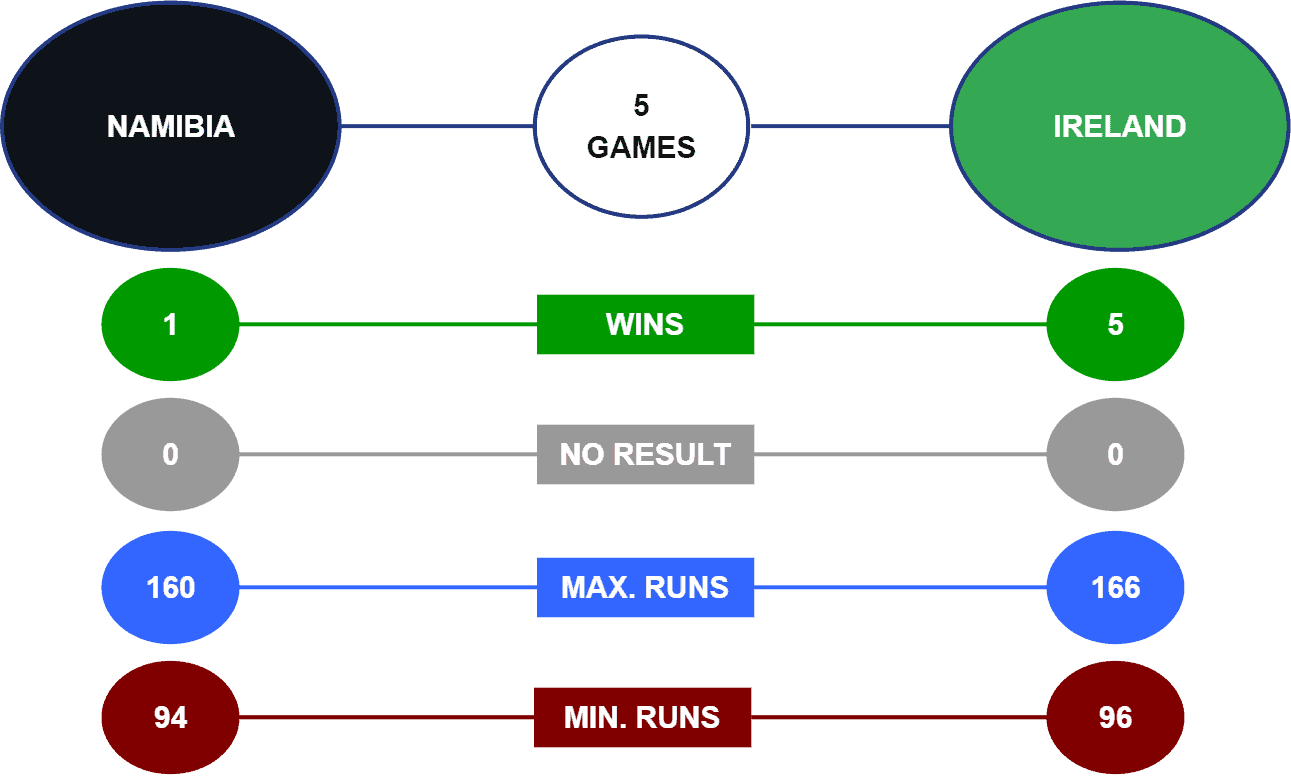 Let’s discuss Namibia vs Ireland toss winner statistics. Ireland may be ahead on the actual wins but it’s Namibia who have had the better of things as regards the toss.

It’s 4-2 in their favour when it comes to the coin flip. Let’s trust Namibia to win the toss again.

Recommended Bet: Back Ireland to win @ 1.50 with Betway

I think Namibia have had their moment with that excellent win over the Netherlands and that’s as good as it might get for them. It’s worth remembering a couple of things.

If Namibia chase and have less than about 150 to get, they might be in the game. But Ireland should be too strong for them, either way. Here’s our Betway review, by the way. Make sure you have a read so you find out why we think it’s such a top betting site.