It is the final match of Group B in the T20 World Cup where Oman will take on Scotland in a last-bid attempt to reach the Super 12.

As part of our provision of tricks for online cricket betting in India, find the best Oman vs Scotland betting tips and predictions below.

Let’s move on to our hot tips from our cricket betting experts ahead of today’s World Cup match.

Scotland would like to win this one to ensure they reach Super 12 without complicating things with the net run rate, seeing how close it is to that of the other teams.

As for Oman, currently placed second in the group, a win here will do well for their chances although, they will need to deliver a big one to ensure that they clear Bangladesh on the NRR.

Expect an entertaining game of cricket where Scotland, owing to their superior pedigree and form in the format, are expected to come out on the top.

We are in Muscat for this one where the matches have been fairly entertaining – from batting and bowling perspectives.

Scotland recently posted 165-9 at this venue against Papua New Guinea to flex their muscles while Oman, in their T20 World Cup group opener, chased P.N.G’s 129-9 with 131-0.

Weather-wise, expect clear skies with no rain interruption. Teams may benefit from chasing. Check out our Oman Cricket Academy betting guide for more on this venue!

Oman vs Scotland Head to Head

The two teams have met five times in T20 cricket and not so surprisingly, it is Scotland who dominate the H2H tally against Oman with 5-0. 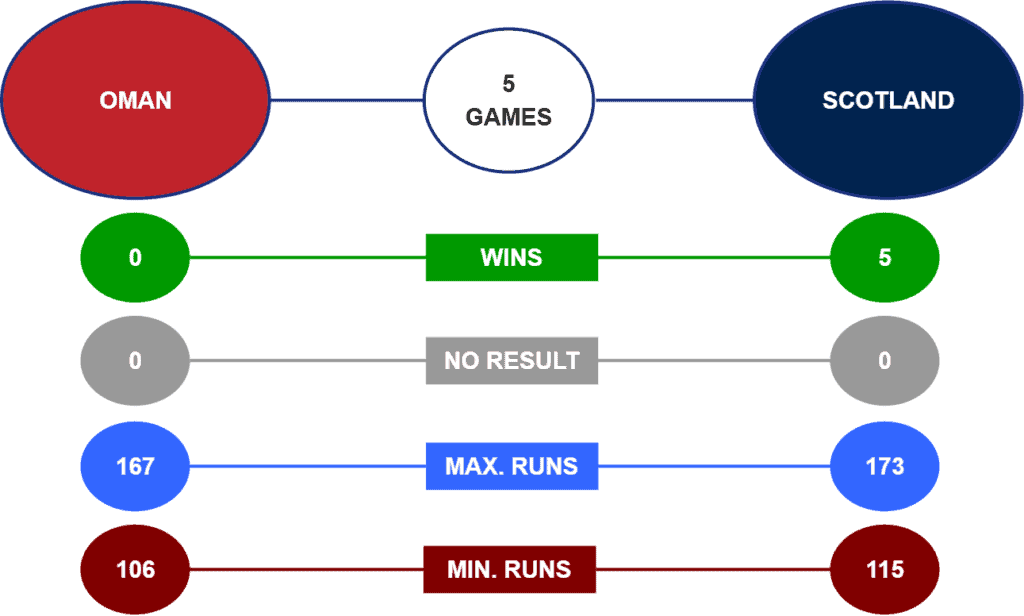 Oman have had better luck in the toss department, having won it three out of the five times with a 60% win rate. The hosts have also won the toss in two of their last three meetings.

However, in our Oman vs Scotland toss winner prediction, I’m going to back Scotland to win the coin toss and make it an even tally.

Recommended Bet: Back Scotland to win @ 1.58 with Pure Win

Scotland will start this match as the heavy favourite to win. They have the form on their side and psychological advantage over the hosts in the H2H tally – there is no reason to back the other side in our Oman vs Scotland predictions.

They had a field day against Papua New Guinea, having beaten them by 17 runs after reaching 165-9 in the first inning. Cross and Richie Berrington added 105 runs between them but could do with some more support from their fellow batters. On the whole, their players are on a fine run overall.

However, if Scotland lose, it all comes down to the net run rate which, at the moment, is hardly distinguishable.

As for Oman, they fell to Bangladesh by 26 runs after a strong start and know what areas they need to focus on. That said, it is hard to imagine a win for the hosts here – all things considered, they are still slightly inferior, like for like, to Scotland.