The first test match had more swings and roundabouts than spaghetti junctions. Ultimately, Pakistan proved too strong for the Tigers, who will be kicking themselves to not win from a position of strength.

The second test between Bangladesh and Pakistan gets underway at the Sher-e-Bangla stadium at 9:30 am on 4th December. Up next, my Bangladesh vs Pakistan betting tips including cricket betting predictions for the match!

The hosts were in a fantastic position after the first innings, hitting 330 before bowling Pakistan out for 286 runs – the visitors had been 146 for no wicket at one stage!

The Tigers could not cultivate the momentum from their bowlers though – falling for just 157 runs in the second innings, leaving Pakistan just 203 to chase. Opener Abid Ali, who had scored 133 in the first innings, hit another 91 to guide the visitors home with ease.

My cricket prediction is Pakistan to come out on top once more.

Get daily cricket updates sent directly to your mobile? You can receive all of Bet India’s Telegram Channel notifications, including the latest predictions & betting tips!

It’s been a few months to forget for the hosts – after failing to win a match at the Twenty20 World Cup, they are yet to hit their straps against Pakistan, losing all four matches of the tour so far.

There were signs of green recovery shoots in the first test, though! A mammoth 206 run partnership between Liton Das (114) and Mushfiqur Rahim (91) helped them recover from 49-4 to post a respectable 330 in the first innings.

The bowlers also helped their side recover from a position of peril – taking 10 wickets for 140 runs to haul back Pakistan’s strong opening stand of 146 for no wicket. A first innings lead of 44 had Bangladeshi fans dreaming of an upset.

Like so many times of late, though, the Tigers couldn’t see it through. The top order once again failed, and Liton Das couldn’t post enough to rescue them – despite a valiant fifty. They were all out for just 157, leaving a manageable 201 target for Pakistan to chase, which they did so with ease.

Bangladesh have to discover consistency to seriously challenge top teams like Pakistan.

There is some good news for Tigers fans – two top players are returning, though it won’t be enough to alter my Bangladesh vs Pakistan win probability position.

Shakib Al Hasan and Taskin Ahmed are back from injury, though opening batsman Saif Hassan looks set to miss out again through illness.

Plenty of changes are expected – the squad departs for a tour of New Zealand just two days after the match against Pakistan concludes and reports suggest selectors are minded to keep as many players as fresh as possible.

Left-arm spinner Taijul Islam claimed 7-116 runs in the first innings – spinning a total web around Pakistan’s batters and putting his side in a belting match situation.

If he can utilise similar pitch conditions alongside the return of his spin twin Shakib, he could be in line for more wickets here!

It has been a hugely successful tour of Bangladesh so far for Pakistan – they are yet to lose an official match on this tour, which comprises three Twenty20 internationals and one Test.

The fantastic form across both formats comes off the back of a highly promising Twenty20 World Cup showing, where they were stunned by Australia in the semi-finals.

The best part for Pakistan is the blend of experience and youth in their line up – it feels as though this team is coming to the boil very nicely, and could dominate international cricket over the coming years.

There are no new injury concerns for Pakistan ahead of the second test, which should mean an unchanged line-up for the visitors.

World-class leg-spinner Yasir Shar remains out injured with a thumb injury – he will not play any part in the final segment of Pakistan’s tour of Bangladesh!

Abid Ali looks in pristine form at the moment – without his runs in the first innings, it’s likely Pakistan would have been battling to save the match rather than winning it at a canter.

With 224 runs across both innings combined, he was rightly awarded man of the match. I expect him to maintain that similar vein of form here and finish the series as top run scorer!

Bangladesh skipper Mominul Haque is hoping for a similar pitch at the Shere-e-Bangla stadium, after the surface at the Zahur Ahmed Chowdhury Stadium in Chittagong provided a competitive surface.

The weather is set fine for Saturday, though there is a threat of rain around on Sunday, Monday, and Tuesday. Here’s hoping the forecast holds out for a result.

In the 13 test matches played between these two teams, Pakistan have never lost a game – winning 11 games, with one match ending in a draw and another being abandoned.

I can’t see a reason as to why Pakistan won’t extend that winning run here – my Bangladesh vs Pakistan betting tips remain the same in that it will be an easy victory for the visitors. 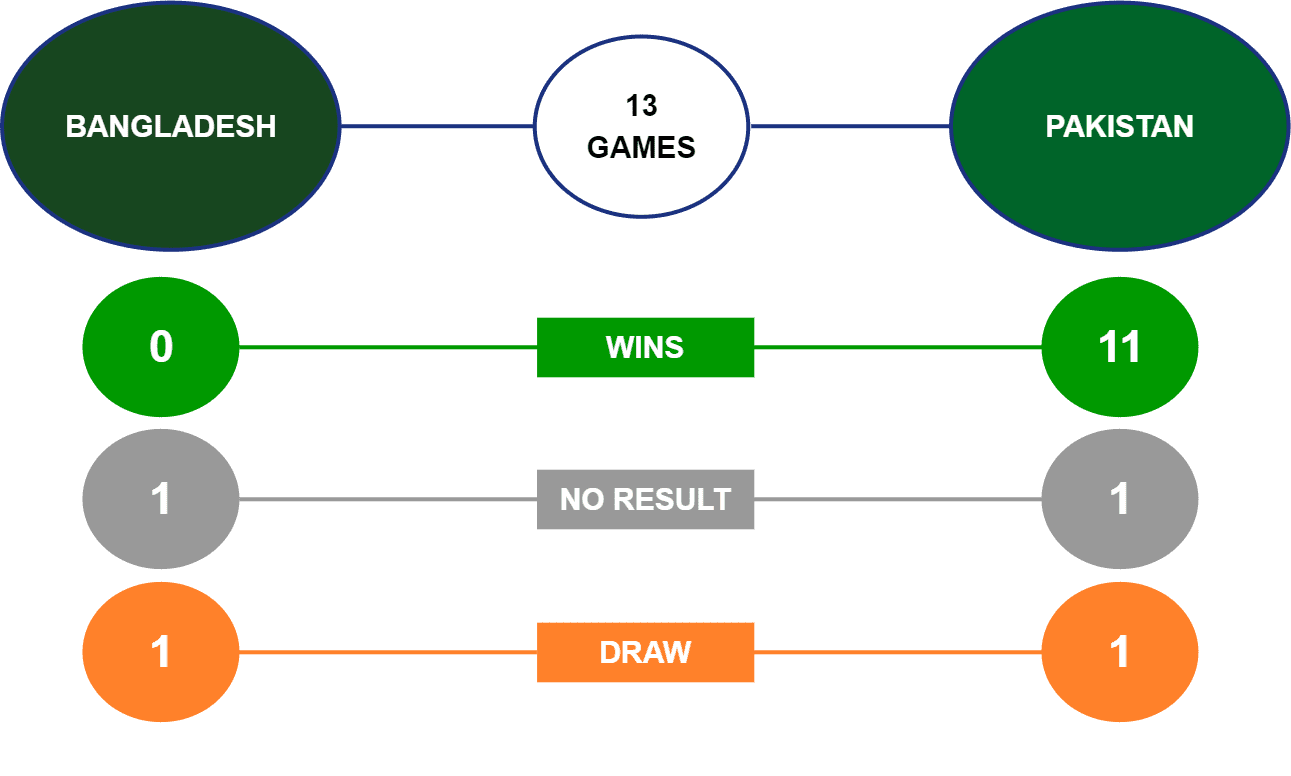 The hosts won the first test match toss, so I’m backing Pakistan to win the toss this time around. Any side that wins the toss will almost certainly opt to bat first, given the conditions and the propensity for big runs to be scored in the first innings at the Sher-e-Bangla stadium.

Recommended Bet: Back Pakistan to win @ 1.55 with Pure Win

I can’t see any other outcome here than an easy win for Pakistan – they have totally dominated Bangladesh all tour, with the exception of a few sessions. To change those Bangladesh vs Pakistan betting predictions, the hosts will have to show some consistency at the top of the order.

The pitch conditions at the Sher-e-Bangla stadium will deteriorate the longer the match goes on – if Pakistan get any sort of total in the first innings, I can’t see the hosts having a sniff at victory.

My match prediction is an easy Pakistan win and I’m backing them at Pure Win – they are top dogs for odds in online cricket betting.

Recommended Bet: Back Abid Ali to be Pakistan’s top batter @ 4.50 with 10CRIC

He was immensely impressive throughout both innings in the first test match – without his runs, it could have been a different story and maybe even an upset.

The opener should thrive on a decent batting track given the form he’s in – I can see him once again making the most runs for Pakistan.