In what is largely a do or die situation for both sides, Rajasthan Royals will take on Mumbai Indians in the Indian Premier League. The match will start at 7:30 pm IST on Tuesday, October 5, at the Sharjah Cricket Stadium in Sharjah.

Check out the best IPL betting online including Rajasthan Royals vs Mumbai Indians betting tips with previews, and predictions. You’ll also find the best live cricket satta rates for the game too!

With just two matches remaining, both teams are in dire need of victories to reach the playoffs.

Mumbai Indians, as the two-time defending champions, are having a season to forget. Despite a superior pedigree, they haven’t delivered as well as we would expect them to.

Rajasthan Royals have been in the same boat although, their recent win puts them strongly in the contention.

At the moment, Rajasthan Royals are placed sixth in the table with 10 points with two games remaining. They will need to win both of these to remain in the playoffs race. At the same time, RR will also need to do something about the low net run rate of -0.337.

After incurring three consecutive losses, Rajasthan Royals were propelled to victory with a 7-wicket win over the table leaders Chennai Super Kings on Saturday. Chasing a gigantic target of 190 runs, RR batters had a field day with the likes of Evin Lewis, Yashasvi Jaiswal, Sanju Samson, and Shivam Dube all joining the party.

Seeing how the pitch conditions in Sharjah have been difficult to bat on, it will be important for these players to carry forward that consistency.

Their bowling unit, however, may benefit in Sharjah. Rahul Tewatia and Mustafizur Rahman have got their work cut out for them on Tuesday.

Mumbai Indians are placed seventh in the table with 10 points while their net run rate of -0453 is the second-lowest in the tournament.

They have won just one of their last five matches in the UAE leg and haven’t been particularly impressive – be it with the bat or ball. The Rohit Sharma-led outfit has scored 150+ runs just once batting first. As for their performance in the second inning, they have lost two matches chasing targets in the 150-160 runs range.

Most recently, they succumbed to Delhi Capitals by four wickets in a low-scoring affair. The current IPL champions were restricted to just 129-8, which the DC managed to reach in the nick of time.

On paper, Mumbai Indians may arguably have a stronger squad than their Rajasthan counterparts, but whether they can perform under pressure is a different story.

Going by the past few matches in Sharjah, it seems that bowlers have the ability to call the shots more than the batsmen.

Targets upwards of 150 would be considered fairly defendable although, this being a high-stakes match, both sides will look to go beyond that.

The head to head tally between RR and MI is quite close at 13-12 in favour of the Indians.

They also won the first leg of this fixture in Delhi by seven wickets, comfortably chasing down a target of 172 runs. Quinton de Kock’s 70 off 50 in that match was crucial as Rohit Sharma and Suryakumar Yadav departed quite cheaply. 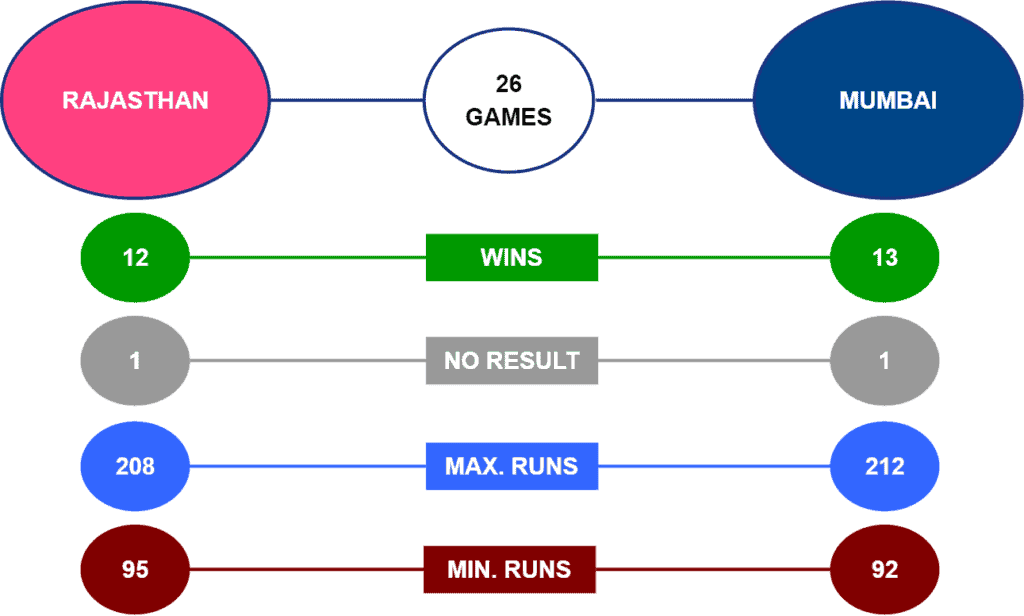 Rajasthan Royals dominate when it comes to the toss department although, it is just 13-10.

Mumbai Indians won the toss in the first leg of this fixture and since we are backing Rajasthan to win here, let’s go all the way and back them to win the toss as well.

Granted that backing a win for Rajasthan Royals is going against the favourites as Mumbai are still considered a superior side.

However, after ruling the IPL for the last couple of seasons, it was only a matter of time that they incurred a ‘humbling’ season and land in the bottom half of the table. Mumbai Indians are hurting and are low on confidence although, their familiarity with the Sharjah pitch may give them a slight edge.

Meanwhile, Rajasthan will be spirited after that brilliant batting performance against Chennai Super Kings. With wind in their sails, they are likely to keep up that momentum.

Check out our full Pure Win review for the full lowdown on their site.

Recommended Bet: Back Evin Lewis to be RR Top Batter @ 4.0 with Betway

Since joining the Rajasthan Royals for the UAE leg, Evin Lewis has posted figures such as 36, 6, 58, and 27.

The 29-year-old is a prolific T20 batsman who most recently guided St Kitts & Nevis Patriots to their maiden Caribbean Premier League title. He scored 426 runs in 11 innings with best figures like 102 and 77, both not out.

He can bat in demanding conditions and when in the groove, there is no stopping him. Seeing that he opens for Rajasthan, he has ample time in his hands to score some runs.