Looking for live cricket satta rates on the IPL Qualifier 1? Of course, you are! We are in the end game of the Indian Premier League 2021 with the first playoff match set to be played this weekend. League leaders Delhi Capitals will lock horns with Chennai Super Kings in Qualifier 1, in a bid to reach the final.

The loser of this match will have another chance to reach the final by the way of Qualifier 2.

This match will be played on October 10, Sunday, at 7:30 pm IST at the Dubai International Cricket Stadium, Dubai.

Get Delhi Capitals vs Chennai Super Kings IPL betting tips for this qualifier game, along with the match predictions, preview, and team news.

Up next, our free cricket prediction for today’s IPL match! Both teams enjoyed a terrific campaign in the Indian Premier League this season although, Delhi Capitals have by far proven themselves to be the superior side.

I’m going to back DC to win the match and reach the final of the IPL 2021.

With 10 wins from 14 matches, Delhi Capitals finished the IPL 2021 group stage at the top of the table with 20 points and a net run rate of +0.481 – the second highest in the competition.

The last year’s runner-ups have put on a much better performance this time around, having clinched four more points than the previous season. Since the start of the competition, they have established themselves as the team to beat.

DC have won four of their six matches in the UAE leg of the tournament although, they did lose their final group game against Royal Challengers Bangalore by 7 wickets. That match could have been won just as easily, seeing that they had to defend 164 runs. However, the boys were let down by their fielding as they dropped three catches of Glenn Maxwell.

Their other defeat came at the hands of the Kolkata Knight Riders.

Delhi Capitals have outperformed their opponents with the bat and ball. Shikhar Dhawan and Prithvi Shaw are the leading run-getters with 544 and 401 runs respectively. Shreyas Iyer has also been quick to leave a mark while the likes of Shimron Hetmyer and Rishabh Pant have also done their bit with the bat.

As for their performance with the ball, there is plenty of talent to go about in all departments – be it pace or spin. Avesh Khan, Axar Patel, and Kagiso Rabada have 50 wickets between them this season. These in-form bowlers have also been supported by Anrich Nortje and Ravichandran Ashwin.

Needless to say, Delhi Capitals boast impeccable depth in their entire line-up. It has been a concerted team effort from their end rather than relying on individual brilliance.

Chennai Super Kings had every opportunity to finish at the top of the table. However, after losing their last three group games, they had to settle for second place with 18 points.

Even though there is no real harm done to their chances of winning the title, the drop in form and momentum may prove to be costly against the unforgiving Delhi Capitals.

Their first of the three defeats came at the hands of Rajasthan Royals, failing to defend 189 runs. The second one was against the Capitals while the most recent one came when they faced Punjab Kings. It was a shoddy batting performance in both those defeats that let CSK down – they mustered some 136 and 134 odd runs in the first innings.

Perhaps, their over-reliance on Ruturaj Gaikwad to bring in the runs is costing them a bit. Or maybe, it’s the fact that Moeen Ali and MS Dhoni haven’t really clicked in the UAE leg. Bringing in Robin Uthappa in place of Suresh Raina hasn’t worked out well for them either as both of them have failed to step up to the task of a No.3/No.4 batsman.

But the eight-time Indian Premier League finalists can seek solace from their bowling unit and their near-flawless history in the IPL playoffs.

Credit where it’s due, Shardul Thakur, Deepak Chahar, and Dwayne Bravo have bowled wonderfully while having Josh Hazelwood and Ravindra Jadeja in the arsenal has also brought in the crucial wins for them.

We’re in Dubai for this one where the pitch has been the one to support the batsmen. Delhi Capitals scored upwards of 160 runs just a few days ago while CSK have been beaten here back to back.

The pitch has something to offer for batsmen and bowlers like and seeing how Delhi Capitals are acing in both those departments, they may have a better chance of thriving here.

In the 25 times the two teams have met, Delhi Capitals trail their Chennai counterparts by 10-15.

Impressively, they have won their last four meetings against CSK and look well-settled to maintain that dominance. 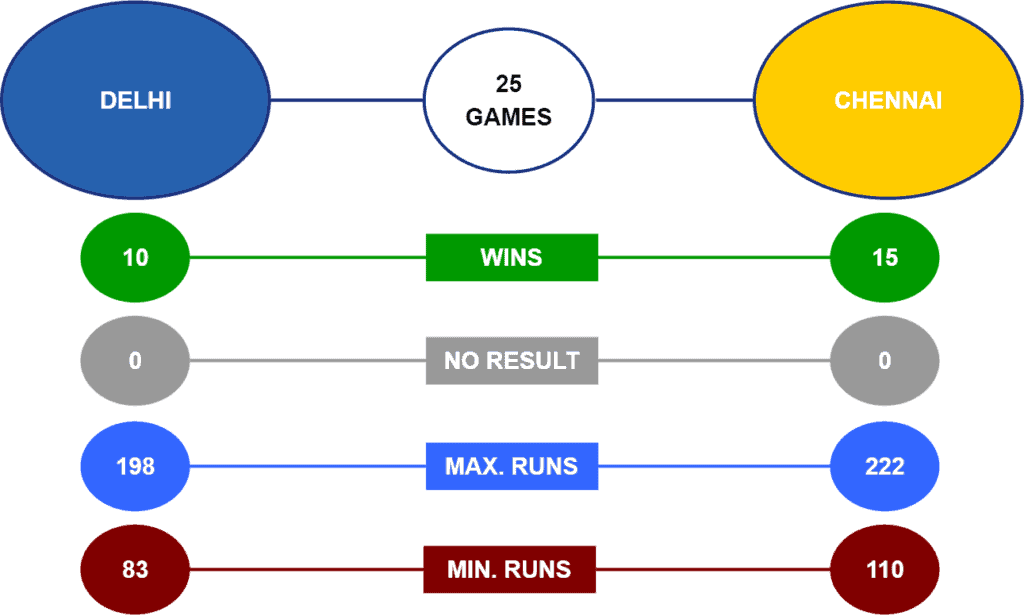 In the DC vs CSK winner predictions, the team that wins the toss will start with a small advantage. Historically, CSK have enjoyed in this regard as they lead 14-11. However, they lost the toss both times this season.

In line with the philosophy that lightning doesn’t strike the same place twice, or in this case, thrice, I’m backing MS Dhoni to win the toss in the IPL qualifier.

Recommended Bet: Back Delhi to win @ 1.97 with Pure Win

Chennai Super Kings may have wobbled in the final group games but the fact remains that they are a team with an incredible history in the tournament. They have reached the playoffs in every season of the IPL (except the last one) and have gone to the final eight times – winning the title thrice.

They know how to perform under pressure and have got the goods to deliver.

But for now, Delhi Capitals will start as the favourites. They have been far more composed as a unit and have gotten progressively better with every match they play. And then there’s also the fact that they have won two of their three games in Dubai.

Of course, one also can argue that this late in the tournament, past form and results do not account for much – it all comes down to how the players perform on the pitch. Even then, the Capitals look capable enough to deliver under pressure.

Recommended Bet: Back Prithvi Shaw to be DC Top Batsman @ 5.0 with Betway

In the final group game, Prithvi Shaw scored 48 runs in a valiant attempt to emerge as the team’s top scorer for the evening. Granted that Shikhar Dhawan is just as much of an appealing bet in this regard, but Shaw is available at a slightly better price.