It is the semifinal of the Caribbean Premier League on Wednesday as Guyana Amazon Warriors take on St Kitts & Nevis Patriots. The match will be played at Warner Park in Basseterre on September 15 at 12:00 am IST.

Check out all the latest news and get the best analysis on Guyana Amazon Warriors vs St Kitts & Nevis Patriots betting tips! You’ll also get the best suggestions for cricket betting online with the best odds listed!

The Amazon Warriors staged a stunning comeback to seal the semifinal berth – a second-place finish no less! As for the Patriots, they pushed through to third place following a decent start to the season. Of late, however, their form has taken a sharp dip.

While on paper, the Patriots have a superior squad on paper, I’ll have to go with Guyana Amazon Warriors on this one as they are looking far better and more composed. Check out my free cricket betting tips below for the best predictions and odds!

Make sure you check out our full CPL Playoffs betting guide to get a full understanding of how to bet and, more importantly, who to bet on!

The Guyana Amazon Warriors have delivered a stunning comeback from a stage when it seemed like they would be finishing at the bottom of the table.

With four wins in their last five, Nicholas Pooran ensured that his men finish in second place with 12 points and maintain their flawless record of reaching the playoffs in every season of the Caribbean Premier League.

They are heading in this fixture after upsetting Jamaica Tallawahs back to back – beating them by 46 runs in the first one and 14 runs in the second.

In the first leg, the Warriors posted 169 runs on the board – courtesy of Pooran’s 75 off 39 and some small contribution from the other batsmen. In the reverse fixture, they put up just 142 runs batting first – this time, they were powered by Romario Shepherd’s 72 off 31.

Needless to say, the Guyana team has relied a lot on their bowling this season – the fact that three of the top five bowlers in the CPL 2021 are from their side (Shepherd, Smith, and Tahir) says it all.

However, what they should keep an eye out for is the misfiring in their batting. Time and again, they have had to rely on individual brilliance rather than a concerted team effort to put runs on the board. There is obviously no shortage of talent here.

St Kitts & Nevis Patriots have got plenty of T20 specialists in their rank. But that may not amount to much when we consider the fact they lost four of their last five in the league and got to the playoffs following a strong start to the season (five wins back to back).

Most recently, they played Trinbago Knight Riders consecutively and qualified for the semis after winning the first leg by 8 wickets. Chasing a target of 160 runs, Evin Lewis singlehandedly drove the team with his handsome century of 102 in half as many balls.

In the second leg, however, the Patriots batted first and put up a small target of 148 runs – Lewis wasn’t a part of the playing XI then. The Knight Riders chased it down with four wickets to spare.

As a unit, they tick all the right boxes in the right departments but the inconsistency in results of late may just spell their doom.

Scattered showers are the forecast for Tuesday afternoon in Basseterre, St Kitts and Nevis. As a result, rain may interrupt the play and the possibility of using the D/L rule is also on the cards.

Being the home turf of the Patriots, they are certainly more than familiar with Warner Park. The last couple of games have been low-scoring ones but teams with enough batting firepower have found it in them to reach high totals.

The Patriots are two for two this season but despite that, they still find themselves trailing heavily to their Guyana counterparts. In the 14 matches played, the tally now stands at 10-4 to the Guyana Amazon Warriors. 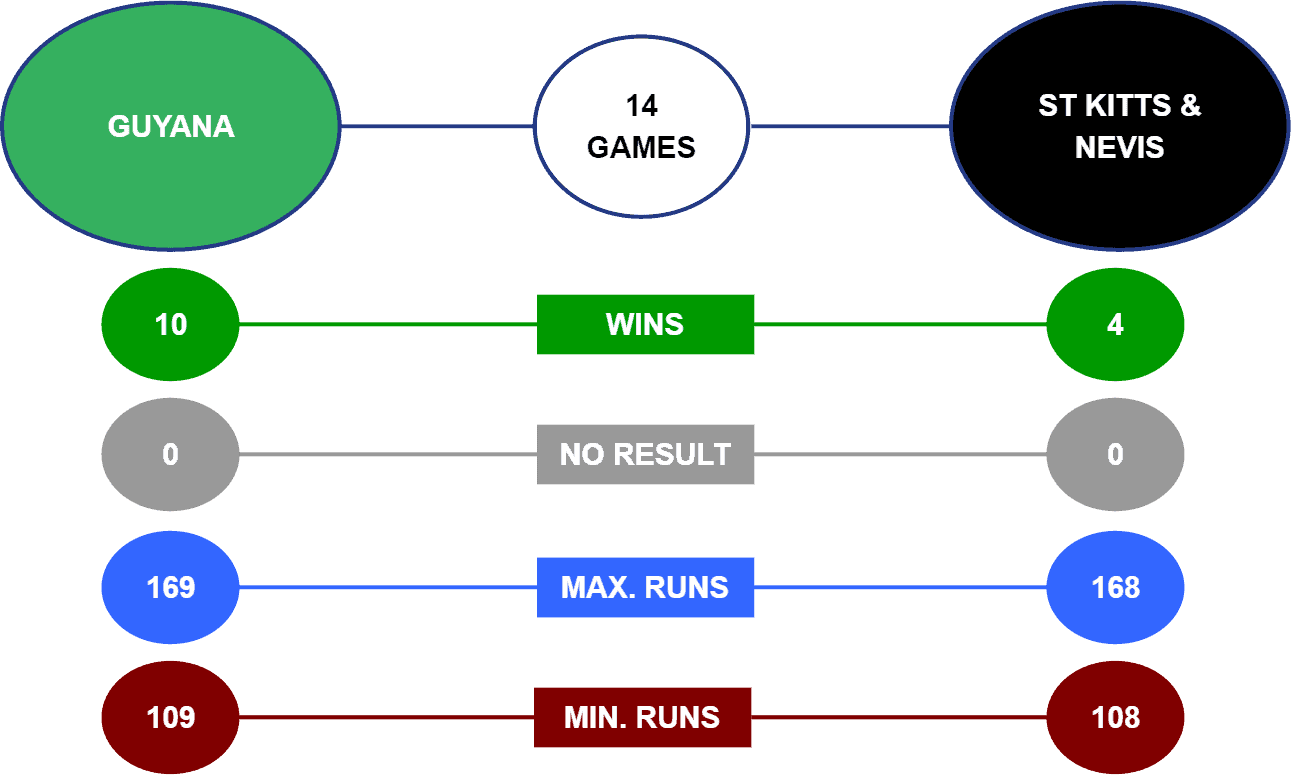 The Guyana Amazon Warriors have had terrific luck with coin toss this season – they won the same in both the legs of this fixture in the group stage. I’m going to stick to the trend and back them to win the toss this time around too.

Recommended Bet: Back The Warriors @ 1.9 with Pure Win.

The Guyana Amazon Warriors have a few things going on for them – they have the momentum, their bowlers are in good form, and they are in yet another playoffs in the Caribbean Premier League.

Meanwhile, the Patriots have been struggling a bit with the bat – and when taking on a team that is relying on their bowling to get the job done – it does not bode well for them. That said, the team still has the likes of Gayle, Lewis, and Bravo – if they manage to click on Tuesday, then this match can very well go the other direction.

But for now, the Warriors seem to have the upper hand. If they can get their opening batsmen to find their form, then the likes of Tahir and Smith should do well with the ball to reach the final.

You can also check out our Pure Win review to see why we favour this operator for the CPL.

Recommended Bet: Back Evin Lewis to be the Patriots Top Scorer @ 4.50 with 10CRIC

With 343 runs so far this season, Evin Lewis is the league’s second-highest run-getter. Most recently, he hit 102 not out against the Trinbago Knight Riders while his other leading figures include 73 and 60.

Given that he is an opener and possibly, the only in-form batsmen on the Patriots side, he will have plenty of time to get the runs and become the team’s top runscorer for the afternoon.