The A-List of Indian Sportswomen and Men in International Sports

Sports have always been part of the Indian culture and is seriously taken by many households in the country. While some sports have become more prominent and famous over time, Indians have represented their country at sporting events all over the world.

There have been a few sportsmen and women from India who have made their mark in the world. The sports which they thrive in are not the more popular ones such as cricket, football or hockey. In a country where a few sports, namely cricket is idolized, the achievements of these sportsmen have often been ignored.

These sportsmen and women have not only won accolades and trophies for themselves, but they have also set an example. An example for the generations to come by helping them understand the sport, practice and eventually excel in them. Mary Kom is a woman known for many things besides the sport she excels at. Belonging to a humble background from the state of Manipur, becoming a 6-time World Amateur Boxing Champion is no joke.

Mary Kom is also the first Indian boxer to win a gold medal in the Asian Games in 2014 and to win a gold in the Commonwealth Games in 2018. The Ministry of Youth Affairs and Sports in India have appointed her as a national observer in boxing. She is also an elected member of the Rajya Sabha, the upper house of the Indian parliament. Sania Mirza is the only name that comes to mind when we think of tennis and India. She has been the most successful tennis player from India with many accolades to her name. Including being a former world number 1, Sania Mirza has won 6 grand slam titles.

In her singles career, she was noted for her victories over some of the best players of the game, namely Svetlana Kuznetsova, Vera Zvonareva, Marion Bartoli, Dinara Safina and many more. However, her victories over former world number 1, Martina Hingis and Victoria Azarenka are still spoken about.

She was highly successful in the singles circuit until a major wrist injury made her shift to the doubles category. She played women’s doubles and mixed doubles until the end of her career.

Sania Mirza also has 14 medals to her name from the Asian Games, the Commonwealth Games, and the Afro-Asian Games. She also currently serves as the Women’s Goodwill Ambassador for South Asia by the United Nations. Apart from this, Abhinav Bindra had also won the gold medal in the 2014 Commonwealth Games held in Glasgow.

Abhinav Bindra retired in 2016 after the Rio Olympic Games and has been mentoring and coaching young rifle shooters to pave their way to greatness.

It is difficult to not know the name Saina Nehwal, who has been synonymous with the game of badminton in India. The former world number 1 currently holds 24 international titles along with 7 Superseries titles. In 2015, she became the only female badminton player in the country to be ranked world number 1 and the second player in the country to be so, after Prakash Padukone.

The ace shuttler has been given the prestigious Padma Bhushan award by the Government of India. Apart from this, she has received the prestigious Rajiv Gandhi Khel Ratna Award and the Arjuna Award. 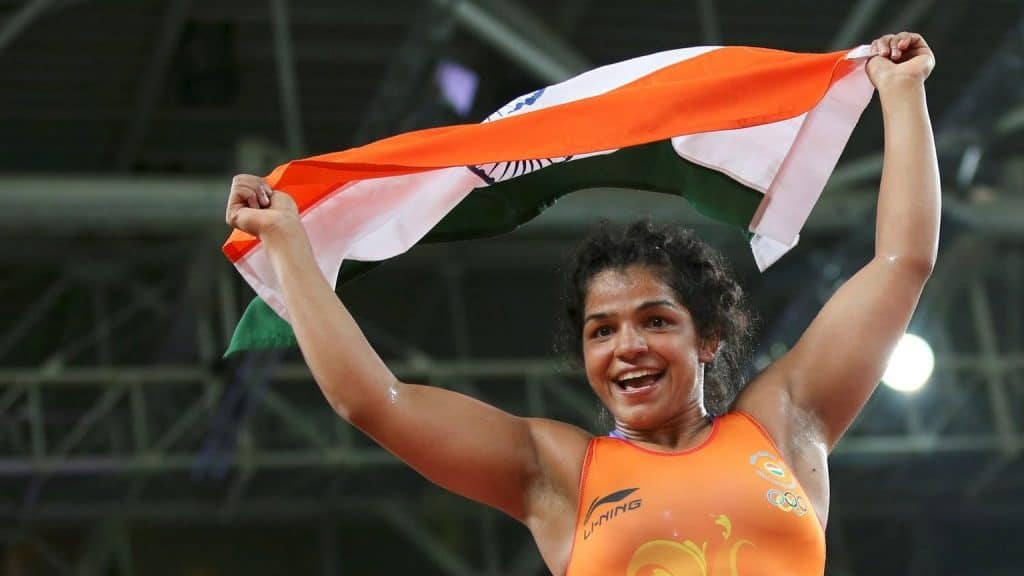 Sakshi Malik is one of India’s finest women wrestlers and has won many medals in the top tournaments in the world. She is the first Indian female wrestler to win a medal in the Olympics when she bagged the bronze in 2016.

The wrestler has also won a silver medal in the Commonwealth Games in 2014, held in Glasgow. Along with this, she had also won a bronze in the 2015 Asian Wrestling Championships in Doha. She is known to compete in weight categories between 58kg and 63 kg.

Another player who has been very successful along with Saina Nehwal in badminton is P.V. Sindhu. She made her international debut in 2009 and kept reaching new feats in the sport. P.V. Sindhu was ranked world number 7 in 2017. She has won many medals in international tournaments, as well as, in India.

P.V. Sindhu is the second woman in the world to win 5 or more medals at the World Championships. She broke into the top 20 rankings at the age of 17. She also represented India in the 2016 Olympics and became the first Indian to enter the finals of the tournament.

In addition to her accolades, she has also won a silver medal in the Commonwealth Games in 2018 and the 2018 Asian Games. The Indian Government has bestowed her with the prestigious Rajiv Gandhi Khel Ratna and the Padma Shri.

Pankaj Advani is a maestro in a sport which not many people know about, Billiards. He became a professional in the game in 2012 and won IBSF World 6-Red Snooker Championship in his debut. He has won the World Championship 23 times.

Pankaj Advani, the Prince of India, as he is popularly called has achieved the hat trick of hat tricks in English Billiards. He holds the World, Asian and Indian National Championship titles simultaneously in 5 different years.

These are some of the Indian players who have been competing in international sports and winning several accolades for the same. They have also been active in helping the youth of the country to pursue a career in their respective sport making themselves and India proud.