Quetta Gladiators are about to take on Islamabad United in the 2022 Pakistan Super League. They meet at the National Stadium in Karachi at 7:30 pm on 3rd February and I have all the PSL betting tips ahead of the game right here!

The Gladiators have won only one of their first three games – can they improve? You’re in the best place for online cricket betting with my Quetta vs Islamabad betting tips coming up next!

My free cricket betting tips include two Quetta vs Islamabad predictions. After looking at today’s PSL betting odds, I am backing Islamabad United to win.

Quetta have failed to get out of the group stage two years in a row. Since the start of last year’s tournament, they have only 3/13 group matches.

In their second game this year, Quetta managed to beat Karachi Kings – but the Kings have lost all three matches they’ve played so far.

Last time out, the Gladiators became the first team not to win a PSL match this year when batting second. They fell six runs short of the Multan Sultans.

England’s Jason Roy and James Vince have arrived in Pakistan from the West Indies. Roy – who has played for four different teams in the Indian Premier League since 2017 – would be an exciting addition to Quetta’s batting lineup, but he might not be out of quarantine in time.

But the batting has been less of a problem than the bowling recently. Naseem Shah, Iftikhar Ahmed and Mohammad Nawaz all went at more than 10 an over against Multan Sultans.

Quetta’s openers have been their best batsmen so far. While Will Smeet made 97 in their first game, but the top scorer overall is Ahsan Ali.

The experienced Pakistan international has smashed 154 runs in three innings – including individual scores of 73 and 57*.

I look forward to seeing what he can do today – and whether he can keep Jason Roy out of the team!

They have won the PSL twice, but United have not made the final since 2018. It is too early to tell if Islamabad are good enough to break that disappointing recent run.

This year, they have started with a win and a loss. The loss was against Multan Sultans – who have won 4/4 so far – so there is no shame in that. But conceding 218 runs to the Sultans must be a worry.

The win came against Peshawar Zalmi. United chased down 169 with 25 balls to spare – so at least their batsmen are in good form.

Led by Shadab Khan, the middle order is full of hitters all the way down to Hasan Ali.

It seems more likely that Islamabad will change their bowling unit. Overseas star Marchant de Lange has been expensive so far. Perhaps United will choose another spinner to support Shadab and his leg-spinners.

I think Islamabad’s captain is the man to watch in this match. In United’s last game against the mighty Multan Sultans, Shadab Khan smashed 91 from just 42 balls.

With his team chasing a target of 218, Shadab was under pressure from the off. He responded well and gave his team a fighting chance.

If he plays as well again today, I don’t expect he will be on the losing side.

The team batting first has won the last three PSL matches in Karachi. That does not match with the long-term trend. Before those games, the chasing team had won 19/20 matches here since the start of the 2021 PSL.

Since the PSL began in 2016, the Quetta vs Islamabad head-to-head record is: 7 wins for the Gladiators; 6 wins for United. United won both meetings in 2021. There have been two previous meetings in Karachi – each team has won one. 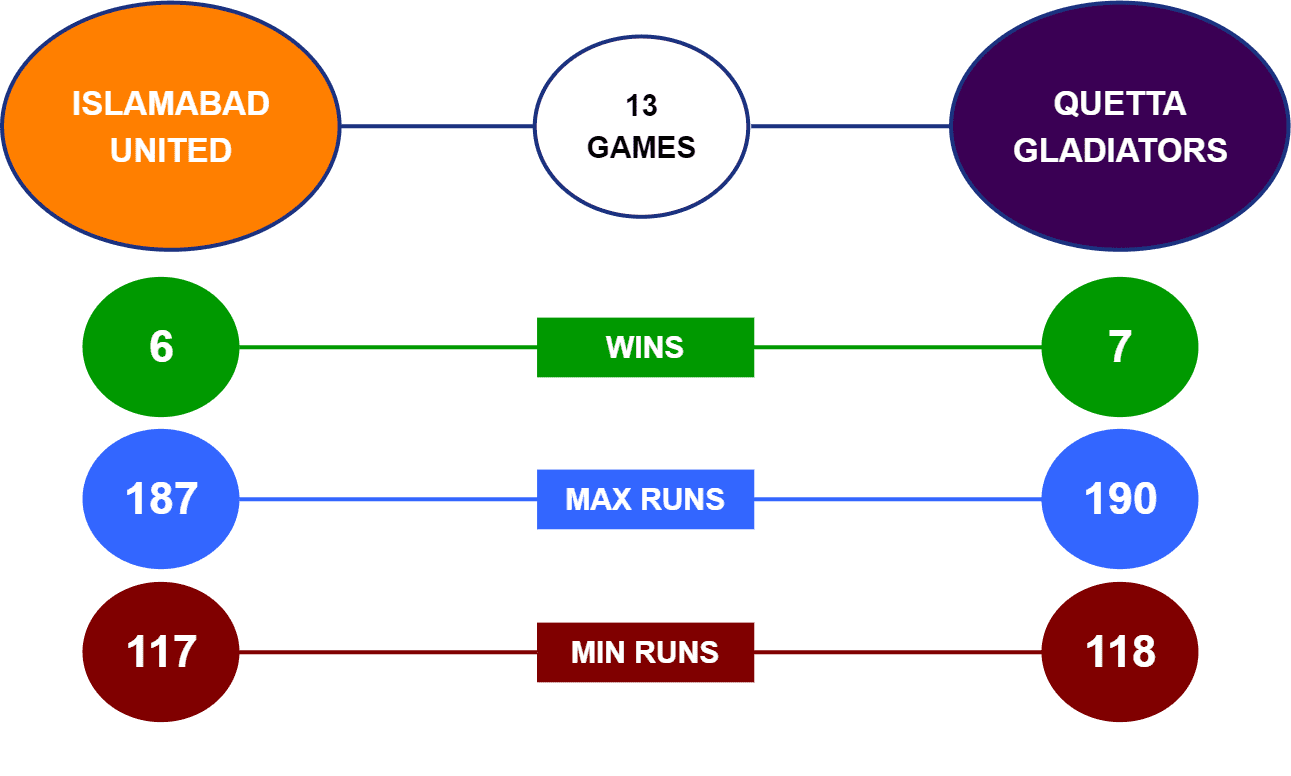 The Quetta vs Islamabad toss winner statistics show a strong bias. Quetta have won 8 previous tosses. Islamabad have won only 4. I am backing the Gladiators to extend their good record and win the toss in this match.

Quetta were the worst team in the PSL last year and they might be the weak link again in 2022.

Ahead of this match, I think Quetta will struggle to match Islamabad’s hitting power – even if Jason Roy plays.

The odds are about right and I agree the win probability Quetta vs Islamabad is in favour of United. My betting prediction is for Islamabad to be the match winner.