Karachi Kings are about to take on Islamabad United in the 2022 Pakistan Super League. They play at the National Stadium in Karachi at 8:00 pm on 6th February and I have all the PSL betting tips ahead of the game right here!

The Kings have lost every game so far – can they get a first win? You’re in the best place to find out and bet on cricket online. Read on for my Karachi vs Islamabad betting tips.

My free cricket betting tips include two Karachi vs Islamabad predictions. After looking at today’s PSL betting odds, I am backing Islamabad to win.

The pre-tournament favourites have been the biggest disappointment of the 2022 PSL so far. The Kings have lost all four games they’ve played – and need an amazing turnaround if they want to regain the title they won in 2020.

On Friday they got the chance to bowl first. Peshawar Zalmi posted 173/4 and the Kings never really kept up with the run rate. They lost by only 9 runs – mainly because they had a big last over when the game had already gone.

The Kings have been outplayed in every match so far, so it wouldn’t be a surprise to see some changes for this one.

Overseas batsman Joe Clarke missed the Kings’ last game through injury. English hitter Ian Cockbain came into the team and might get another chance.

Another Englishman could make his first appearance of the tournament against Islamabad.

Chris Jordan – who has played for Punjab Kings in the Indian Premier League – has been on international duty in the West Indies, but could return to strengthen the bowling unit.

If Karachi Kings want to start winning, they really need Babar Azam to do even more.

In his last match, the captain and opening bat hit 90* off 63 balls against the Zalmi. He was the only reason the Kings got anywhere close to Zalmi’s total.

Before then, Babar had scored 23, 32 and 41. Because his team are so reliant on him, those scores aren’t enough. But at least they are going in the right direction!

Islamabad have made a decent start to the 2022 PSL. Perhaps this is the year they will get to the final for the first time since 2018.

United won two of their first three matches – only losing to the in-form Multan Sultans.

On Thursday, they looked awesome in posting 229/4 – the highest team total so far in this year’s tournament. Then captain Shadab Khan delivered a five-for with the ball and his team won comfortably.

Islamabad’s batting lineup might be the most dangerous of all in this year’s PSL. It starts with the international trio of Alex Hales, Paul Stirling and Colin Munro.

If you get through them, you have to face a big-hitting middle order that includes captain Shadab Khan.

United are more likely to make changes to their bowling unit, which hasn’t been quite so impressive. South Africa’s Marchant de Lange may or may not make the team for this game.

Colin Munro smashed 72* from just 39 balls in United’s last match. It was the New Zealand left-hander’s first game of PSL 2022 because he recently had coronavirus.

I expect there is more to come from him. Since he joined United from Karachi Kings, the 34-year-old has hit six 50s in just 16 innings.

Worldwide, Munro was the fourth highest run-scorer in T20s in 2021. He could do something special against his former team today.

Ahead of Saturday’s two games, five matches in a row had been won by the team batting first in Karachi.

Before that, the team bowling first had won the first six games of PSL 2022.

The longer-term trend shows the team bowling first has the edge. They have won 19/25 games at Karachi since the start of last year’s PSL.

Since the PSL began in 2016, the Karachi vs Islamabad head-to-head record is: 10 wins for Islamabad; 6 wins for Karachi.  United have even won 2/3 previous meetings in Karachi – as well as both meetings in last year’s PSL. 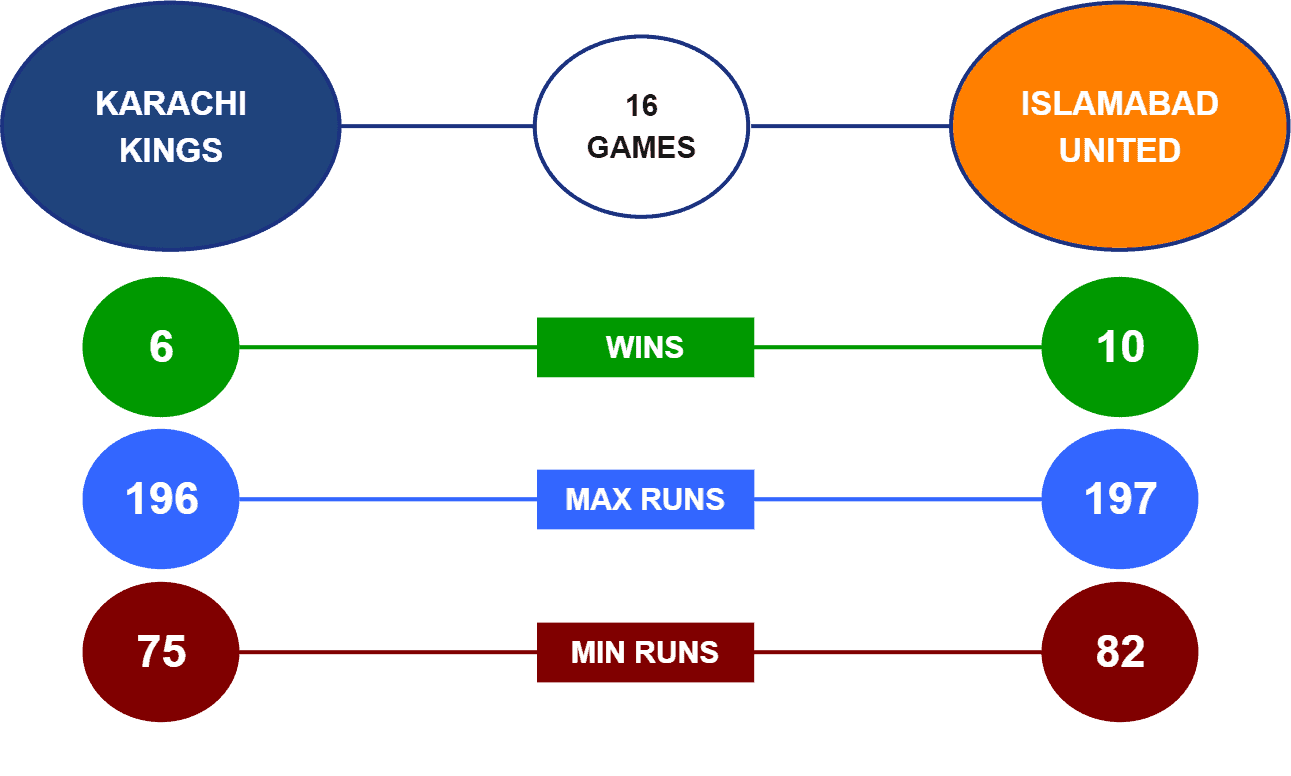 The Karachi vs Islamabad toss winner statistics show an even split. Both teams have won 8 previous tosses against each other. Because the Kings have lost 3/4 tosses so far in the 2022 PSL, I am backing United to be the toss winner in this match.

Even though the Kings are playing at home, I think the win probability Karachi vs Islamabad is firmly in favour of United.

United have an exceptionally strong batting lineup. Karachi’s bowling attack is questionable – even if they now have Chris Jordan.

If Islamabad bat first, they could post a big total and then the pressure will all be on Babar Azam again. My betting prediction is for Islamabad to be the match winner.