Karachi Kings play Multan Sultans for the second time in the 2022 Pakistan Super League. The two teams meet at the Gaddafi Stadium in Lahore at 8:00pm on 16th February and I have all the PSL betting tips ahead of the game right here!

The Sultans are top of the table. The Kings are bottom. Will there be an upset? You’re in the best place to find out and bet on cricket online. Read on for my Multan vs Karachi betting tips.

My free cricket betting tips include a couple of Multan vs Karachi predictions. After looking at today’s PSL betting odds, I am backing the Sultans to continue their excellent run of results.

Big news! The Multan Sultans have been beaten.

After winning all of their first six games of PSL 2022, the reigning champions played Lahore Qalandars on Friday. The Qalandars posted 182/4 and the Sultans fell well short.

Four batsmen reached 20 but none reached 30 and the Sultans were all out for 130. The bowlers were more expensive than usual too.

This is the match where we find out if Multan’s recent defeat was just a blip – or a sign of something bigger.

I think it’s probably just a blip. From Mohammad Rizwan and Shan Masood at the top of the order to Tim David and Rilee Rossouw lower down, the batting looks strong.

South Africa Imran Tahir is now 42, but he continues to impress with the ball.

Khushdil Shah is a useful middle-order batsman for the Sultans. But he is starting to show what he can do with the ball too.

With his left arm spin, the Pakistan international has taken 12 wickets in 7 PSL matches. That’s second most in the tournament so far.

Khushdil’s partnership with fellow spinner Imran Tahir could be crucial for the Sultans in this game.

The Kings have been a crushing disappointment this year. A month ago, they were pre-tournament favourites. Since then they have lost all seven games they have played.

In their first three matches, they batted first and got beaten. In their last four games, they’ve bowled first and lost.

At least it was a close result against Islamabad United last time. The Kings only lost by 1 run as Imad Wasim hit 55 from number seven and almost rescued the game for them.

The Kings are pretty much eliminated from the playoffs, so there could be changes today as they build for next year.

Their overseas players need to start earning their money too. Joe Clarke is back from injury and might keep another English batsman – Ian Cockbain – out of the team.

England’s Chris Jordan – who has played for Punjab Kings in the Indian Premier League – is one of the Kings’ better options with the ball.

Some of Karachi’s more senior players might have given up on the PSL for this year. But Qasim Akram is only 19.

The young allrounder has come into the Kings team for the last couple of matches and has already made an impression.

Qasim took a wicket in the first over he bowled. In his first innings, he hit 51* from just 26 balls.

Qasim’s desire to impress means the Sultans will have to keep an eye on him today.

This is the 8th PSL 2022 game to be played in Lahore. The team batting first has won 5 of the first 7 matches here.

It’s a good pitch for batting – the average first-innings score is over 180. The weather is expected to be dry for this night match.

Since Multan Sultans joined the PSL in 2018, the Karachi vs Multan head-to-head record is: five wins for the Kings; three wins for the Sultans. Two matches have been abandoned.

These two last met in the very first game of this year’s PSL. Karachi posted a below-average 124/5 and the Sultans beat them with 10 balls to spare. 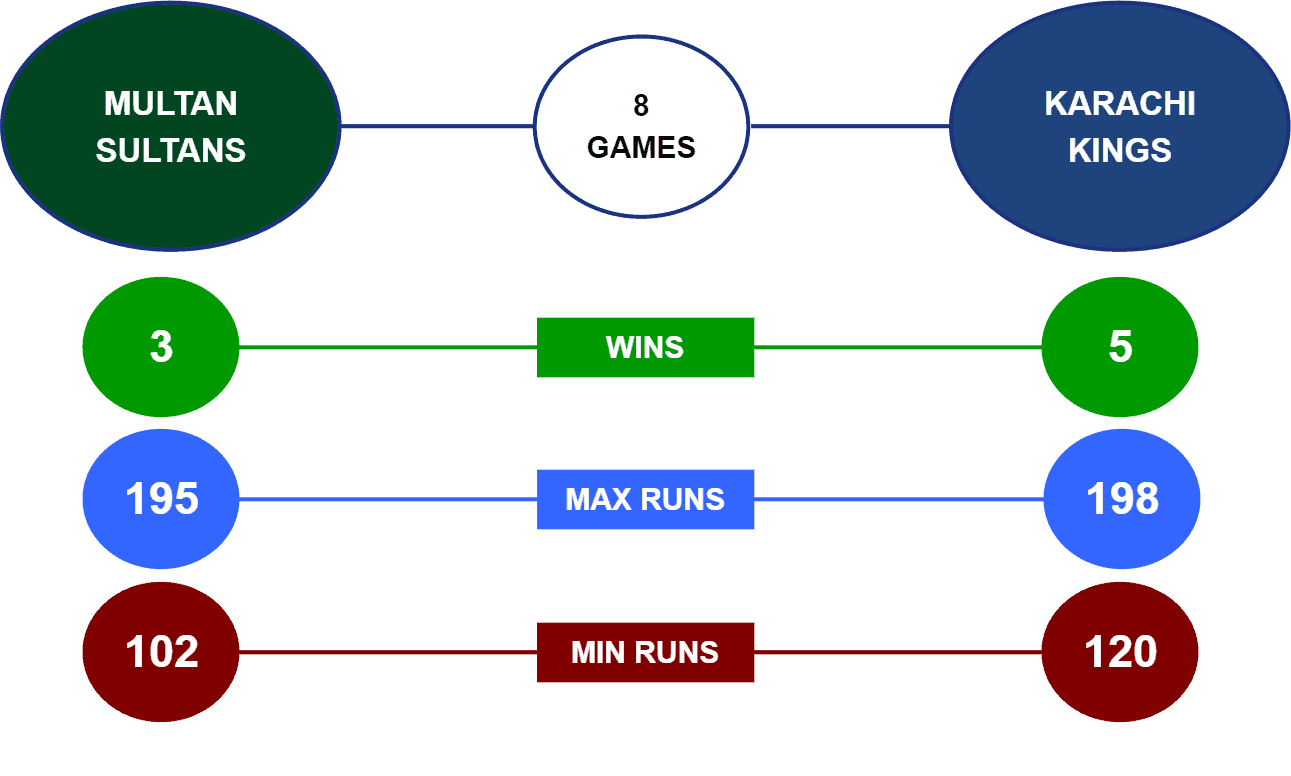 When these two met in Karachi last month, the Sultans won the toss. But that was only the second time they had won in 10 attempts

I am backing the Kings to extend their excellent record against the Sultans and win the toss in this match.

I think the win probability Karachi vs Multan is firmly in favour of the Sultans. They have already beaten the Kings once and I make them strong favourites to make it 2 wins out of 2.

While the Sultans have been the best team in this year’s tournament, the Kings have hardly improved since that early defeat to Multan.

My betting prediction can only be for Multan to be the match winner.