We’re at Dubai for the very first time of this edition of the 2021 Indian Premier League and there’s plenty of great options for betting on the IPL to come! This match will be played on 19 September, with a start time of 7:30 pm IST.

If you’re looking for an online cricket satta bazar at Indian websites, read on because we have the best Chennai Super Kings v Mumbai Indians betting tips coming up next.

Up next, today’s cricket match prediction tips for this IPL match! I have to go with the slight favourites Mumbai here, who as I explain in detail, hold all the trumps, starting with a far superior head-to-head record.

But there’s also a 12.0 chance that may not be as unlikely as it may seem, which makes up our Hot Bet.

Chennai Super Kings are one of just two teams to have not lost any players since the IPL was suspended. Mumbai, curiously, are the other.

But it’s not quite as simple as that.

Sam Curran still needs to serve his quarantine period and Faf du Plessis is still injured after picking up a groin strain playing in the CPL.

A third overseas player has a problem. Dwayne Bravo may not be able to bowl. However, they may feel he’s worth a slot more as proper middle-order batsman than an all-rounder, who’s also an excellent fielder.

The loss of two overseas players opens up the door to Imran Tahir to come into the side, although he may have played anyway, given these wickets take more spin.

Ngidi takes far more wickets in this format as we’ve just seen from the respective strike rates so they’ll probably go with him.

Ishan Kishan was really struggling but may feel about better life now that he was called up to India’s World Cup squad. Trent Boult was particularly expensive in that first half of the season and they’ll be hoping he used some of that time the IPL was suspended to improve his accuracy.

On the flipside Jasprit Bumrah bowled beautifully over in England in the Test series (different format of course but still helps) and Kieron Pollard played some excellent knocks in the CPL, despite his Trinbago side crashing out in the semis.

Thre’s an interesting contest going on for the number 8 slot. Adam Milne is the better bowler and Nathan Coulter-Nile the better batsman.

With the batting they have elsewhere, they’d be better off playing Milne.

Dubai is normally seen as a relatively high-scoring ground where you should need at least 170 batting first. But it can be hard to chase here if it’s turning because the wicket can take a lot of spin, with scoreboard pressure doing the rest.

But we’ll have to wait and see how it plays before drawing some proper conclusions.

Mumbai have won 20 times to CSK’s 12. Things were pretty tight between the two for the first few years but it’s been all Mumbai of late. They played each other four times in 2019 with Mumbai winning the lot and then it was one win-a-piece in 2020. Mumbai also won just before the break, thanks to a Kieron Pollard masterclass. 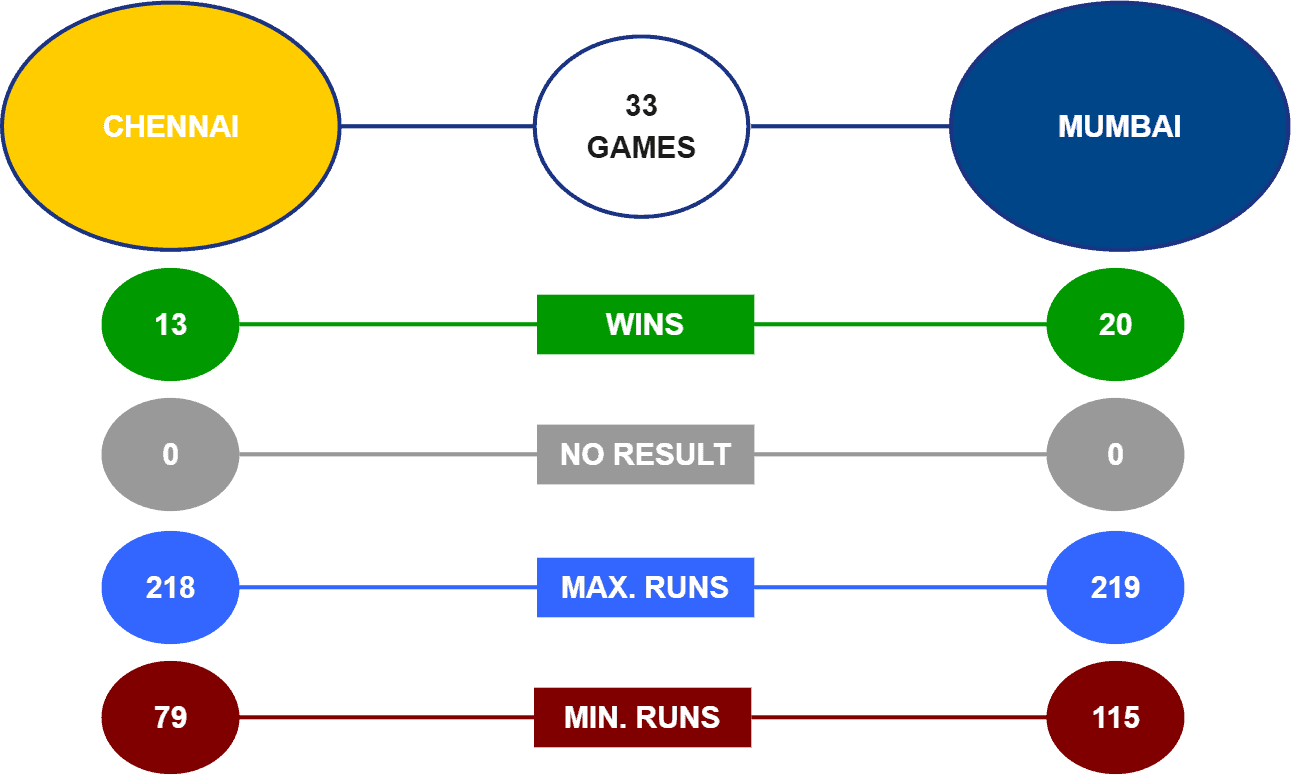 Mumbai are just about ahead over the years. And Rohit Sharma generally has a good record at the toss so I’m going with MI to win the toss.

Recommended Bet: Back Mumbai Indians to win @ 1.75 with Pure Win

Mumbai have a habit of beating CSK and that presumably does has a lot to with match-ups. In other words, maybe Kieron Pollard takes a liking to CSK’s bowlers at the death overs or maybe Jasprit Bumrah has found out how to dismiss CSK’s top order, having done so often in the past.

So that will certainly help Mumbai’s cause, as will the confidence that comes from beating another team so often.

Add the fact that in du Plessis and Sam Curran, CSK are missing two vital players, plus that issue with Bravo, and you can see why it’s the Indians holding all the trumps.

Recommended Bet: Back Ravindra Jadeja to be top CSK batsman @ 12.0 with Betway

The absences of du Plessis and Curran should mean that we see Ravindra Jadeja come to the crease much earlier than usual. He may even come in at number four or five if Dhoni decides he wants a left-hander at the crease earlier in proceedings to make Mumbai’s bowlers’ jobs harder.

He played a couple of decent knocks over in England and has generally done well in Dubai so at odds of 12.0, he’s worth going with.