The Adelaide Strikers scooped a much-needed win over the Brisbane Heat last time out and remain just about in touch for an Eliminator spot – but it’s been a disappointing campaign for a side under the stewardship of exciting new coach Jason Gillespie.

The Scorchers are on the march – it is certain they will finish at the top of the standings and the Big Bash League final will be held at the Optus Stadium this year. They have only lost two matches all season – and I don’t think the L column will be added to in the aftermath of their clash against the Strikers.

My Adelaide Strikers vs Perth Scorchers betting tips include a comfortable win for the league leaders. I have been looking at the live cricket satta rates and other elements of the match-up before play starts at 05.10 am IST at the Adelaide Oval – for my full breakdown of the match, continue reading my pre-game preview below.

The Scorchers are heavy favourites, unsurprisingly. They are a skinny price to win, though, and I think there could be some better value found elsewhere.

Check out my Hot Bet as part of today’s cricket betting tips for bigger returns on your wager.

The Strikers managed to get closer to the ever advancing pack with a win over Brisbane Heat last time out, but they still remain bottom of the pile.

The victory provided a reminder of the talent in their ranks – Rashid Khan, in his last appearance of the BBL this year, claimed a remarkable 6/17 from his four overs – an astonishing return for one of the best spin bowlers of his generation.

One could argue they are in a false position – they have suffered a number of close defeats, including an agonising 2-run loss to the Renegades at the start of the campaign – a result that really set the tone for the rest of the season. But in reality, the big players haven’t stepped up to the plate enough times to make them realistic challengers.

With Khan out of the side, maybe take a cheeky punt on Matt Short to take centre-stage – the 26 year-old from Ballarat, Australia, opened the batting and the bowling for his side – scoring 27 from 19 balls and taking 2 for 13 from three overs. A speculative Man Of The Match punt returns 12.0 with Betway.

As mentioned above, Rashid Khan has played his last game for the Strikers in this tournament – the spinner is leading the charge in Afghanistan’s upcoming tour of the Netherlands.

Matt Renshaw could also miss out – he was absent for the victory over the Brisbane Heat after testing positive for Covid-19.

It was a short and sharp innings from Thomas Kelly in the victory over the Heat – but there was enough there to suggest real promise for his future in this competition.

The young Aussie hit 24 from 16 balls at a strike rate of 150 – including one massive six!

He is an exciting talent and one to keep an eye on for the future – if not this match against the Scorchers!

Only two defeats from 12 matches gives you a sense of just how dominant the Scorchers have been in Big Bash League 11! They are searching for their third straight win here.

Runners-up last year, it’s as though they have a renewed vigour to prove some onlookers wrong – they are succeeding in their mission and then some.

Perhaps the most exciting element of the Scorchers is their bowling attack! Brimming with experienced pacers and strangling spinners, there is a perfect balance between offence and defence in the field.

Jason Behrendorff returned to action in the game against the Melbourne Stars after a period of isolation from his close contact with Colin Munro – who remains sidelined after a positive Covid-19 test.

Nick Hobson came in for Colin Munro in the last game, and performed well – hitting 46 from 36 balls to help his side set a challenging 196/3.

A last-minute call-up to the victory over the Stars, it was a highly impressive performance from Hobson, who set the tone for a big first innings score.

It was only his sixth appearance in the tournament, and he last appeared back in 2019. It will be interesting to see how he gets on again!

The Adelaide Oval last hosted a game a week ago in what was a low-scoring stroll in the park for the Strikers.

I think it could be another struggle for batsman on this pitch, particularly given the strength of each bowling roster.

There are scattered showers around in Adelaide on Thursday, but it should stay clear for long enough to a game in.

The Scorchers edge ahead by one in this fixture over the years, winning ten games to the Strikers’ nine. There is no discernible pattern in terms of preference for batting first or second, either.

The Scorchers are searching for their third straight win over the Strikers. . 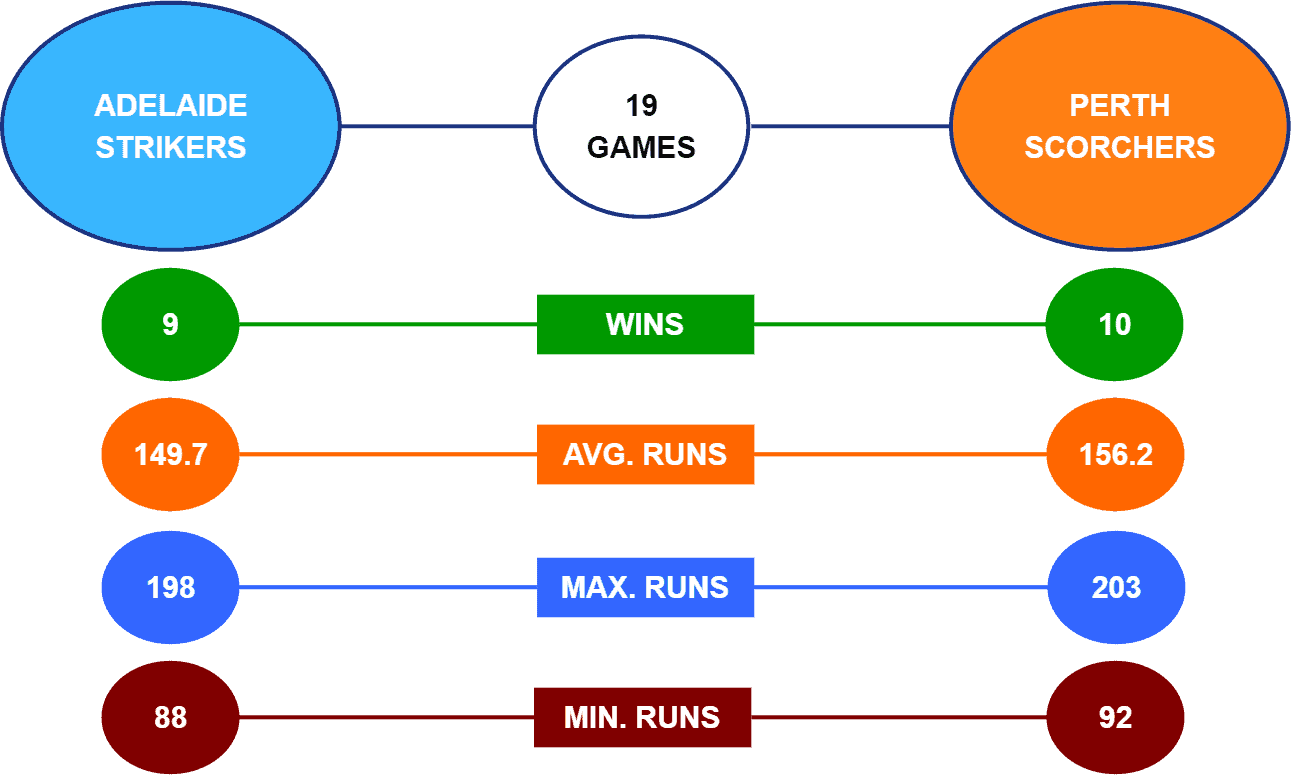 There is a much starker advantage at the coin-toss for the Scorchers – winning 15 of the 19 bat-flips contested between the two.

I’m backing them to continue calling correctly by bagging another chance for the right to bat or bowl first.

You can find the Strikers vs Scorchers toss winner statistics below:

Recommended Bet: Back the Scorchers to win @ 1.53  with Pure Win

The win probability for Strikers vs Scorchers is firmly with the latter, and my match winner suggestion is sticking with the odds.

The price is on the skinny side, so please ensure you bet responsibly and within your means if you go with my Adelaide Strikers vs Perth Scorchersbetting tips.

I recommend you place your bet with Pure Win – a leading international sportsbook with some generous pre-match and in-play markets on all the Big Bash League events. Find out why I like to bet there and read our Pure Win review.

Recommended Bet: Back Jason Behrendorff to be top Socrchers’ bowler at 4.3 with 10CRIC

The tall and gangly Australian is impressively accurate and relentless in his approach to the crease! He can make the ball rise off a length and bowls with great control to keep the pressure on throughout his spell.

He has consistently taken wickets in this season’s campaign too – he has taken 11 in nine matches at an average of 19.45.

I think he could prove a match-winner here, which is why I’m backing him to finish top Scorchers’ bowler. You can find odds of 4.3 with 10CRIC – a leading international betting site that offers phenomenal value across the board.