Peshawar Zalmi and Multan Sultans meet for the second time in the 2022 Pakistan Super League. They play at Gaddafi Stadium in Lahore at 8:00 pm on 10th February and I have all the PSL betting tips ahead of the game right here!

The Sultans beat the Zalmi when they met in Karachi five days ago – can the Zalmi get revenge? You’re in the best place to find the top places offering online cricket betting so read on for my Multan vs Peshawar betting tips!

My free cricket betting tips include two Multan vs Peshawar predictions. After looking at today’s PSL betting odds, I am backing Multan to win.

The Sultans are the reigning PSL champions – and they are not going to give up their crown easily.

In the Karachi leg of the 2022 PSL, the Sultans won all five matches they played. They would now need to collapse in Lahore to not qualify for the playoffs again this year.

Against Peshawar Zalmi five days ago, the Sultans were put into bat and posted 222/3 – the second-highest score of the tournament so far.

The bowlers restricted the Zalmi to 165/8 and the Sultans won by 57 runs.

The Sultans have been the best team in PSL 2022 by a distance. They have found a winning formula and I don’t expect them to make many changes for this match.

Captain Mohammad Rizwan leads a strong top-order. He is averaging more than 50 – and his opening partner Shan Masood has been even better. Masood is the tournament’s second best run-scorer (275 runs from 5 innings).

If the Zalmi get through the top order, they face a dangerous middle-order – Tim David has already shown what he can do with the bat in PSL 2022.

With the ball, South African spinner Imran Tahir continues to be a class act. He pegged the Zalmi back with 3/25 from his 4 overs on Saturday.

It’s not just Mohammad Rizwan’s outstanding batting that makes him my player to watch for the Sultans.

As well as being the third highest run-scorer in the PSL 2022 – with a strike rate of more than 140 – he has been a very tidy wicket-keeper.

Of course he’s also the captain of the Sultans. His calm leadership has guided them to five straight wins. I wouldn’t bet against him making it six in a row in this match.

The Zalmi went all the way to the final of last year’s PSL. Can they get there again this time? It’s too early to tell.

Against teams with winning records (Lahore, Islamabad, Multan) the Zalmi lost 3/3. Now they are in Lahore, they need to start doing better against the good teams.

A couple of new faces could turn the Peshawar vs Multan odds in favour of the Zalmi.

Livingstone – who only made his England ODI debut against India last year – is yet to appear for the Zalmi. If he gets his chance in this game, he will give his team’s batting lineup a serious power boost.

Saqib Mahmood is a 24-year-old fast bowler. He first played for England in a T20I in New Zealand just over two years ago.

This is the first PSL 2022 game to be played in Lahore. Gaddafi Stadium did not host any games in last year’s tournament, but it did in 2020.

That year, teams bowling first won 7/9 completed matches in Lahore. The average first-innings score was 172. The only winning scores by teams batting first were 198/3 and 209/5.

Since the PSL began in 2016, the Peshawar vs Multan head-to-head record is: 7 wins for Multan; 3 wins for Peshawar. The Sultans have also won 5/6 meetings since the start of 2020 – including last year’s final. 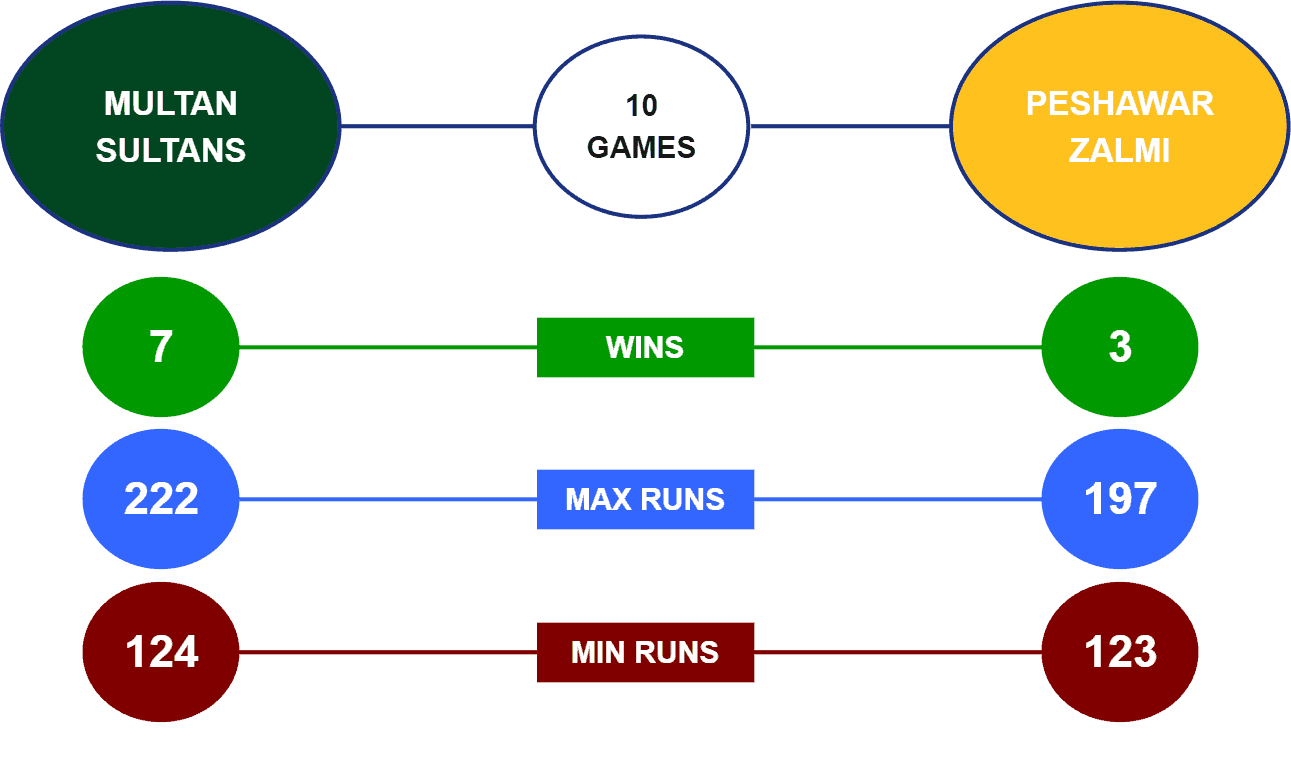 The Multan vs Peshawar toss winner statistics show a strong bias. Peshawar have won 7/10 previous tosses between these two – including the one when they met five days ago. I am backing the Zalmi to be the toss winner again in this match.

I haven’t changed my opinion since these two met five days ago and the Sultans won comfortably. I believe the win probability Multan vs Peshawar is firmly in favour of the Sultans.

Multan have a perfect record in this year’s competition – and a great record in head-to-heads with the Zalmi.

My betting prediction is for Mohammad Rizwan to guide the Sultans to a sixth straight PSL 2022 win.