Looking for MI vs PBKS betting tips? You’ve come to the right place! The Mumbai Indians are the second-most successful side in the IPL – only the Chennai Super Kings have won more titles. Like the CSK, however, the MI are having a wretched time of it this year. Indeed, you would have gotten very long odds on last year’s finalists to be the only two teams without a win after four games.

Crisis stations are already being activated in Mumbai, but it’s quite the opposite side of the coin for the Punjab Kings. They have won two and lost two of their opening four games so far – not yet justifying my pick as one of the front-runners for this year’s competition, although they are not far off! A couple of very close defeats skew their league position (7th).

It doesn’t take much pouring over the live cricket satta rates to come up with today’s Mumbai Indians vs Punjab Kings betting tips – I am confident my match winner prediction is correct.

To see all my IPL betting tips, check out my full game preview below. The match gets underway from 7.30 pm (IST) on Wednesday 13th April at the Maharashtra Cricket Association Stadium in Pune.

My cricket predictions revolve around a comfortable win for the Punjab Kings. Despite the agony of losing to the Gujarat Titans with two 6s off the last two balls last time out, I am backing them to bounce back strongly here.

The Mumbai Indians are in terrible nick, and I can’t see it getting any better. For more of today’s MI vs PBKS betting odds, look below.

Recommended Bet: Back Punjab Kings to win @ 1.83 with Pure Win

Sometimes, the key to making a solid betting prediction is by looking at the bare form figures.

It is rare in sports that a team with four consecutive losses in a row can come into the clash as narrow outsiders – yet you can find odds of 1.83 on the PBKS to beat the Mumbai Indians. I would have them as heavier favourites myself. That’s why I’m backing them in as my MI vs PBKS betting tip for today.

The PBKS were terribly unlucky against the Gujarat Titans and should be coming into this game with three wins behind them. Kagiso Rabada is looking good in orange colours for his debut season, while the PBKS’ batting unit continues to shine.

I will be placing my wager with Pure Win! An exciting Indian betting site with thousands of pre-match and in-play betting opportunities, they tend to offer the best odds on match winner markets. Read our Pure Win review to find out more.

Recommended Bet: Back Rahul Chahar to be Punjab Kings’ top bowler @ 3.75 with 10CRIC

The young spin wizard has been a massive success story for the PBKS so far, taking seven wickets in four games and boasting an economy rate of 6.31.

The fact he is facing his former franchise adds some spice to the mix. Chahar bagged 43 wickets across 42 IPL matches with the MI, and it feels like they are already regretting not splashing the cash to acquire his services once again.

I fancy him to prove a point, so my next MI vs PBKS betting tip will be to back him at 3.75 to finish as Punjab’s top bowler. I will place my bet with 10CRIC – they’re my go-to betting site for all individual player bets. Read our 10CRIC review to find out more.

Shocking. There is no other word to describe it for the Mumbai Indians. The batting unit are not giving their bowlers enough to attack with, while their bowling unit is not functioning at the standards you would expect from the likes of Jasprit Bumrah and Kieron Pollard!

A particular area of weakness for the MI this year is their batting in the middle overs (7-16). They have the lowest run rate of all teams in the IPL for this phase, averaging just 6.75 an over.

Skipper Rohit Sharma is clearly struggling to find his best team – opting for just two overseas players in the latest defeat to the RCB meaning he has used 15 players in total this season – the second-most in the competition.

All hope is not lost for franchise fans though – in 2015, they lost all four of their opening games and went onto win the tournament.

How the Mumbai Indians could do with a player of Jofra Archer’s ilk. The English fast bowler was purchased for INR 8 crore in the Mega auction, despite the player’s unavailability due to an elbow injury.

The return of Suryakumar Yadav from a thumb injury sustained on India’s tour of the West Indies has come in the nick of time for the Indians’ ailing batting line-up, which appears to need all the help it can get!

There are no other injury concerns following the defeat to the Royal Challengers Bangalore.

The one bright spark in a miserable campaign. The middle-order firecracker hit an astonishing 68 not out against the RCB to drag his team from the precipice at 79/6 to a respectable 1516.

It was his second half-century in a row, after hitting 52 runs in a losing cause against the Kolkata Knight Riders.

If I were to have a bet on anything involving the Mumbai Indians, it would be on Yadav to top score for them – you can back him at 4.50 to get the most runs on the board for his team with Betway.

The defeat to the Gujarat Titans would have been devastating to their squad – particularly to West Indies youngster and nominal death bowler Odean Smith. Requiring 18 from the final over, Smith had done a good job, limiting them to five from the first three deliveries.

Then a costly moment of inexperience struck – after bowling what should have been a dot ball, Smith turned to shy at the bowler’s end, with Titans’ Tewatia out of his ground. He missed, allowing them to steal a run. The rest is history – Tewatia hit two sixes on the trot to make history and win the game for the Titans.

It wasn’t all on Smith – this young and exciting Punjab Kings outfit still need to close games out better than they are doing.

However, they are showing all the right signs to mount a playoff challenge at the very least.

There is a concern surrounding batsman Jitesh Sharma, who looked to sustain a hamstring injury while fielding in the deep against the Titans.

If it is the hamstring, it is highly unlikely Sharma will feature here. Bhanuka Rajapaksa, who made way for the returning Jonny Bairstow against the Titans, could return to the side in his absence.

There are no further injury issues for the Kings to worry about.

We are starting to see why the Englishman was the most expensive overseas signing at the IPL Mega Auction – costing a whopping 11,50,00,000 INR, he is paying back the faith shown in him with interest.

In his previous two innings he has hit 64 (from 24 balls) and 60 (from 32 balls) – his presence in the middle order feels like a pillar of strength for Punjab.

He is also contributing with the ball, which is attracting me to backing him as Man of the Match. You can back him to finish as the game’s MVP with Betway at 9.0.

The average first innings score at the Maharashtra Cricket Association Stadium across four matches this season is 173.25, although those totals have been getting lower as the tournament has gone on.

The weather is set to very warm, with the sun beating down on the track at 40 degrees throughout the day.

The Mumbai Indians vs Punjab Kings head to head record is a close-run thing – the Mumbai Indians marginally lead the way. Last season, the spoils were shared in this fixture. You can find the full stats below: 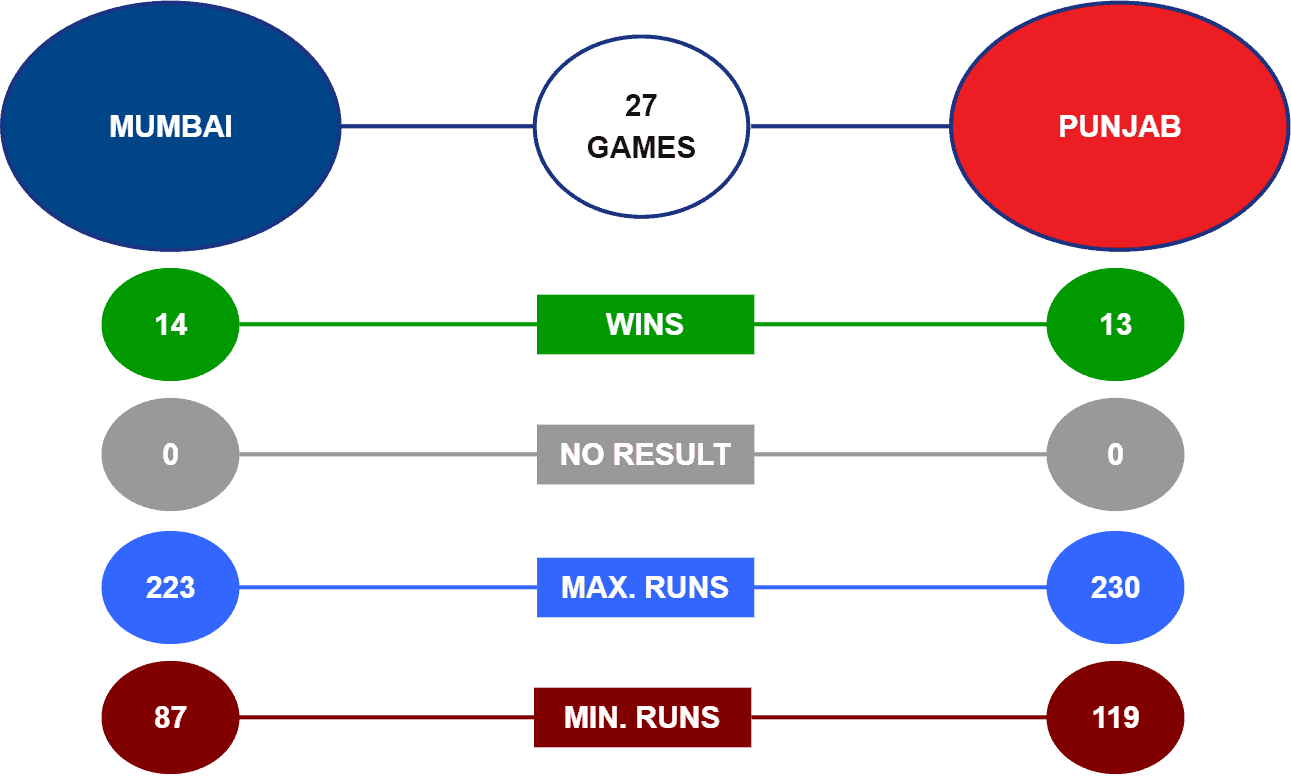