Islamabad United take on the winless Karachi Kings as they attempt to bounce back from a crushing defeat to the Quetta Gladiators on Saturday.

Another woeful performance from the Karachi Kings all but eliminated them this year’s Pakistan Super League finals showdown – their demise this season has been spectacular and hard to watch.

I cannot contemplate backing the Kings when compiling my Islamabad United vs Karachi Kings betting tips – that’s why I’m picking the former to come out on top.

After checking out the live cricket satta rates, I have some other predictions for you below in my full match preview.

The action starts at 15:00 (IST) on Monday 14th February at the Gaddafi Stadium in Lahore.

Islamabad United come into this tie off the back of a gut wrenching defeat to the Quetta Gladiators  in a high-scoring affair on Saturday but they are favourites for this tie due to the form of the Kings.

I see no reason to deviate from the bookmakers odds – I’m backing Islamabad United to win as part of my top cricket betting predictions.

The IU have won three and lost three this season and sit 3rd in the standings by virtue of their higher net run rate than the Quetta Gladiators and Peshawari Zalmi, who are also both on six points.

Their galling defeat to the Quetta Gladiators on Saturday was a phenomenal watch for the neutral cricketing fan – it’s being touted as the game of the tournament so far, but despite setting a daunting target of 199, the IU couldn’t see off the in-form Jason Roy and his teammates.

It is more a case of tipping the hat to the opposition on Saturday, and Islamabad United are looking like a tough team to beat at present.

The medical room is nice and empty from an Islamabad United point of view – they can name an unchanged line-up.

The Englishman has been in sensational form this season – hitting 230 runs at an average of 46 runs to be the sixth-highest scorer of this year’s tournament at the time of writing.

His 62 runs against the Gladiators came from just 38 balls at a strike rate of 163.15 and included four 4s and four 6s and he looks in sensational touch.

I think he could be worth a punt at 3.00 to be the top Islamabad United batsman – you can bet on him at that price with Betway.

It doesn’t get any worse for the Kings! They have lost every game they have played and it hasn’t even been close in the majority of those defeats.

Their 55-run defeat to Peshawari Zalmi on Saturday was emblematic of their campaign – a failure to score runs and build partnerships is costing them time and again this season.

What was most infuriating from a Kings’ fan’s point of view was the turgid start in chasing down a target of 193. In the first three overs, they had hit just 12 runs – in the blink of an eye, the run rate went above 10 and the game was effectively over!

The win probability for Islamabad United vs Karachi Kings correctly lies with the former, and I cannot see how the Kings will turn the tables here.

In fairness to the Karachi Kings, they have had to deal with injuries to several key players – not least Mohammad Amir and Mohammad Ilyas – two guaranteed starters and wicket-taking machines.

No further injuries to announce, though. Expect the Kings to name an unchanged line-up.

He’s the only member of the Kings’ line-up who can hold his head up high this season, and once again top-scored for his team with an expertly crafted 59 runs from 46 balls against Peshawari Zalmi.

One of his only individual failures with the bat came against Islamabad United – he will be hoping to put things right with another significant knock here.

I will back Azam to be the top Karachi Kings batsman at 2.60 with Betway.

The Gaddafi Stadium in Lahore has been a high-scoring venue since taking over hosting duties for the PSL from the National Stadium in Karachi.

Conditions will be warm and humid, but a gentle breeze may make conditions easier to handle.

Islamabad United are looking for their fourth straight win over the Karachi Kings and improve upon their current head-to-head record, which stands at 11-6 to the former.

I can’t see any other result than a win for Shadab Khan’s side. 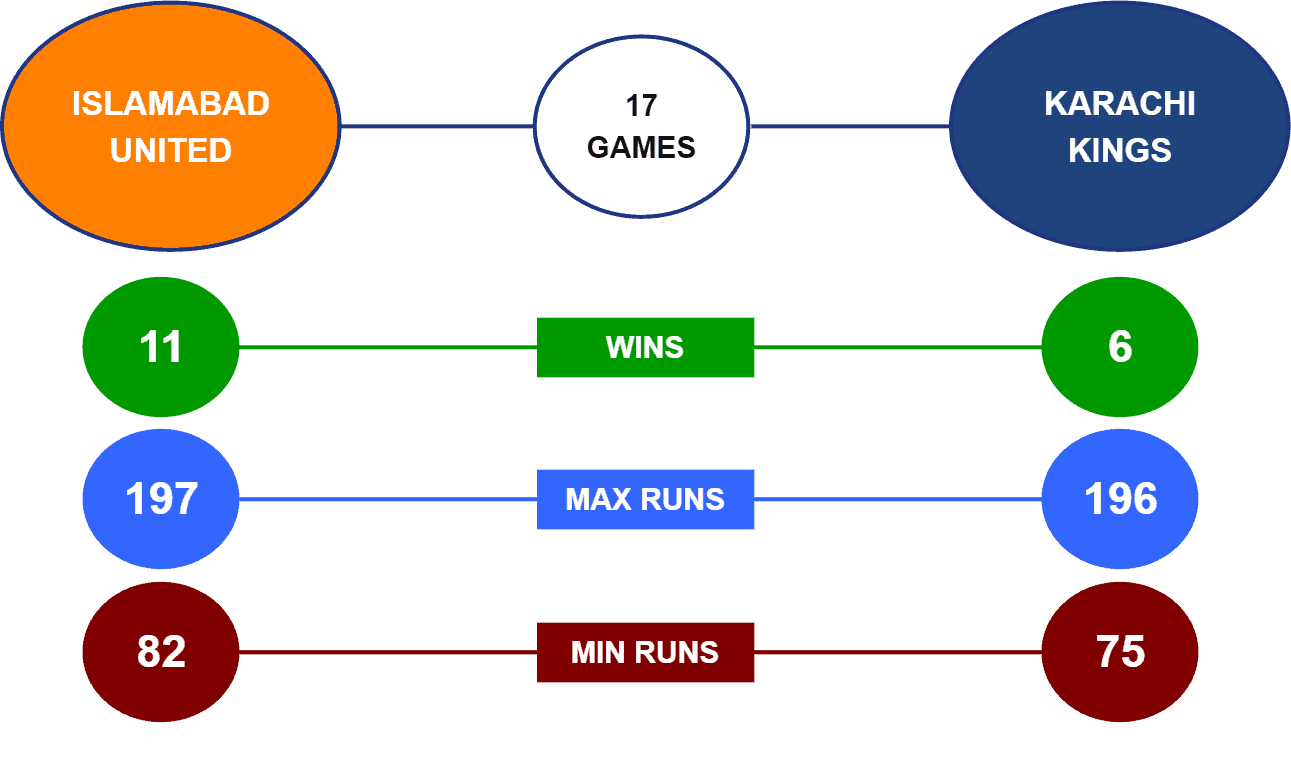 The captain of the correct call may pay heed to the history of chasing in this fixture. Of the 17 games in this clash, 14 have been won by the team batting second.

I can see the Kings winning the toss – they deserve some luck!

Recommended Bet: Back Islamabad United to win at 1.51 with Pure Win!

I have lost all patience with the Kings – they look like a side that entirely depends on Babar Azam and despite the depth of their talent pool, there doesn’t appear to be any cohesion throughout the squad.

Islamabad United are scoring runs for fun this season and they have more than enough strings to their bow to pierce the heart of the Kings.

I am placing my pick with Pure Win – a leading Indian betting site renowned for offering the best odds on pre-match winner markets.Find out why I rate them so highly and read our Pure Win review here.