There were warning signs in the first match of the series, when Zimbabwe fell just short of a surprise victory – but they managed to get over the line on Tuesday in a shock 22-run win over their more illustrious opponents.

After setting a challenging 302/8, the Zimbabwean attack was excellent in dismantling the Sri Lankan batting roster to make a mockery of my  Sri Lanka vs Zimbabwe betting tips and all others that backed a home win.

Everything is on the line now! The series is finely poised at 1-1 and the Lions will be desperate to avoid an embarrassing defeat to a plucky team with some standout individual players, but one that is not on their level.

I have been exploring the live cricket satta rates before the game gets underway at 2:30 pm IST on Friday 21st January at the Pallekele International Cricket Stadium in Kandy.

Despite the defeat last time out, Sri Lanka are still heavy favourites – they go into this match at odds of 1.33.

Although I didn’t see this result coming in my cricket betting predictions for the last game, I did say you should stay away from Sri Lanka at the price. I hope you didn’t back them

You cannot say Sri Lanka were not warned, Despite a thorough warning shot from across the Zimbabwe bows in the first match of the series, the hosts did not pay heed and were made to pay by a ruthless visiting side.

As always in cricket, early wickets are the key to success – and unfortunately for Sri Lanka, they could not protect theirs from Zimbabwe’s impressive opening bowlers. The Lions were reduced to 31/3 from 7.5 overs at one stage. Despite a battling century from Dasun Shanaka, they could not get close to their target.

Chamika Gunasekara remains a doubt after his injury in the first game of the series – it is unlikely he will be available, with replacement Dushmantha Chameera likely to continue deputising.

Two uncapped debutants are available to team management in Nuwan Thushara and Shiran Fernando, should they feel like shaking up their side.

Any positives to take from defeat mainly surround two batsmen. Centurion Shanaka obviously deserves a mention after fighting until the end to take his team over the line, but I’m going to pick out Kamindu Mendis as a player to watch.

The youngster scored a patient 57 runs from 82 balls to carry his team through a sticky opening period and shared a 118-run partnership with Shanaka before he was dismissed by Chatara.

He will keep his place in the side and I reckon he could build on that showing with another solid performance. You can get odds of 4.75 with Betway on Mendis to top score for the hosts.

It was quite the performance from the Chevrons – they were led from the front by a top four who all managed to contribute a meaningful score in their total of 302/8.

The standout innings was from skipper Craig Ervine – the experienced batsman hit 91 runs from just 98 balls in a brilliant knock – but all of the batting unit managed to contribute in one way or another.

The bowling unit was just as efficient – the opening pair of Tendai Chatara and Blessing Muzarabani both nabbed three wickets each – while Richard Ngarava and Wellington Masakadza were suffocatingly accurate.

The all-round performance means I am once again going to avoid putting any money on Sri Lanka to win.

It is unlikely Zimbabwe will make any changes to their playing XI after such a famous victory – expect the same performers to come out firing when they take to field on Friday afternoon.

I am getting lazy – I am picking Chakabva as my player to watch for Zimbabwe for the second consecutive game.

He was unlucky not to register a half century on Tuesday – hitting 47 from 50 balls at a strike rate of 94, hitting five 4s and one 6 in tidy innings.

He looks in great nick and I think he could be a decent bet to finish as top run scorer for Zimbabwe at 4.50 with Betway.

Another batter-friendly surface at the Pallekele International Cricket Stadium led to a shed-load of more runs from both teams – there is no reason to suggest it won’t be more of the same on Friday.

Temperatures will be warm in Kandy, with little-to-no wind and some light clouds forecast.

The win for Zimbabwe means they have now won three of their last four matches against Sri Lanka – are they becoming the Lions’ bogey team?

The overall record still heavily favours the hosts, however. They have won 45 of the 59 games between these two – with four of those games ending in no result.

Find the full head to head statistics below. 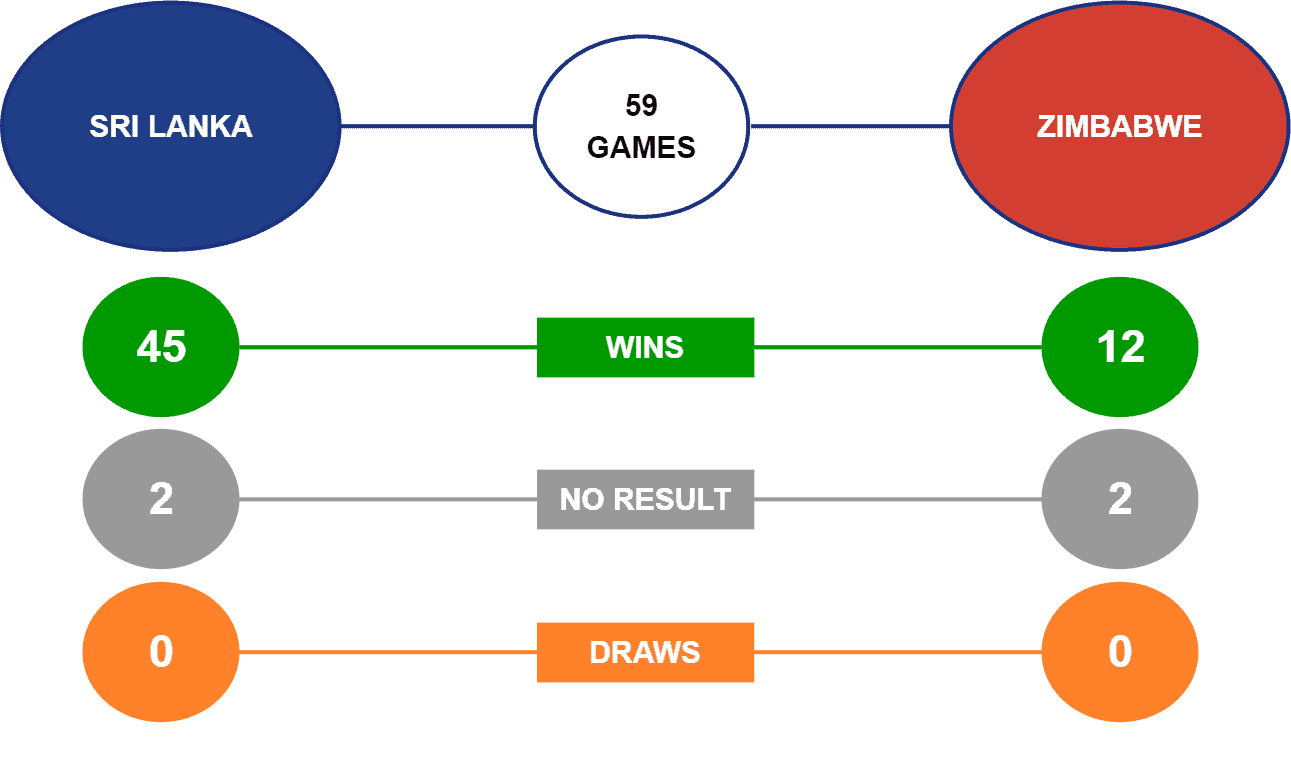 Zimbabwe have won each of the two previous tosses in this series and will be going for the hat-trick – though probably not the type of hat-trick they would prefer.

Sri Lanka still have the edge in the long history between these two sides, though. They have won 33 of the 59 flips

Check out the full toss stats breakdown below for the last ten performances:

Recommended Bet: Back Regis Chabvka to score 50+ runs or more at 3.50 with Betway

The opener and wicketkeeper has now hit 119 runs so far this series, with scores of 72 and 47 in losing and winning causes respectively.

I tipped him to be the top Zimbabwe batsman and I may couple that up with him to score 50+ runs at Betway – one of the best Indian sports betting sites on the market.

Interested in following me in my Sri Lanka vs Zimbabwe predictions? Find out why you should place your wagers with Betway by reading our betting site review.