We’re at Warner Park once more with the best CPL betting tips for the match played on Sunday 12 September, with a start time of 4:30 am IST.  If you like cricket betting live from Indian websites, read on because we have the best Trinbago Knight Riders v Saint Kitts and Nevis Patriots betting tips coming up next.

Let’s start off by looking at today’s cricket match prediction tips, shall we? I’m going with favourites the Knight Riders here and there are four pretty good reasons for that. I also believe that a certain TKR batsman can top score for his side from number three, at very decent odds.

One thing they’ve realised is that on this wicket at Warner Park, taking pace off the ball is key. That means they should let their spinners bowl plenty of overs and that even the faster bowlers shouldn’t try to bowl fast, but rather deliberately bowl slower and bowl off cutters, as well.

They also realised there was no place for Dinesh Ramdin, who never really got going. Maybe the veteran wicket-keeper batsman’s days are numbered at top level cricket, full stop.

They also came to the conclusion that playing Sunil Narine as an opener didn’t really work. Yes, occasionally he scored quickly but he always got out soon after.

Lastly, they realised that skipper Kieron Pollard is by far their best batsman and needs to come in earlier when needed. Very often, he was the difference. All in all, they look like the most likely winners of this year’s CPL.

They went off like a train but are losing form at just the wrong time and in serious danger of missing out in that all-important Top 2 finish, which would give them two shots at making the final.

Chris Gayle has been disappointing. In his second spell at St Kitts after a disastrous couple of seasons at Jamaica, he just hasn’t got going on this Warner Park wicket.

Maybe they should give him a go in the role where he spent 90% of his career: as an opener. It’s just not working for him at number three but then again, they’re not going to drop him, are they?

On the plus side, Fabien Allen continues to impress and could be the next Andre Russell for the Windies as an all-rounder who can cause huge destruction in the final overs with the bat.

His off-spin is very handy as well and he’s a fine fielder so expect him to play a big role for his country at the upcoming T20 World Cup.

The Warner Park conundrum goes on. We wouldn’t necessarily advise a bet on the first innings runs market because it’s been so hard to call in terms of what is a par score here.

It’s been pretty much one-way traffic. Trinbago are 12-4 up over the years in what has been one of the most one-sided contests in the CPL. Simple maths tells us that Trinbago win three games for every one that the Patriots win when they play each other. 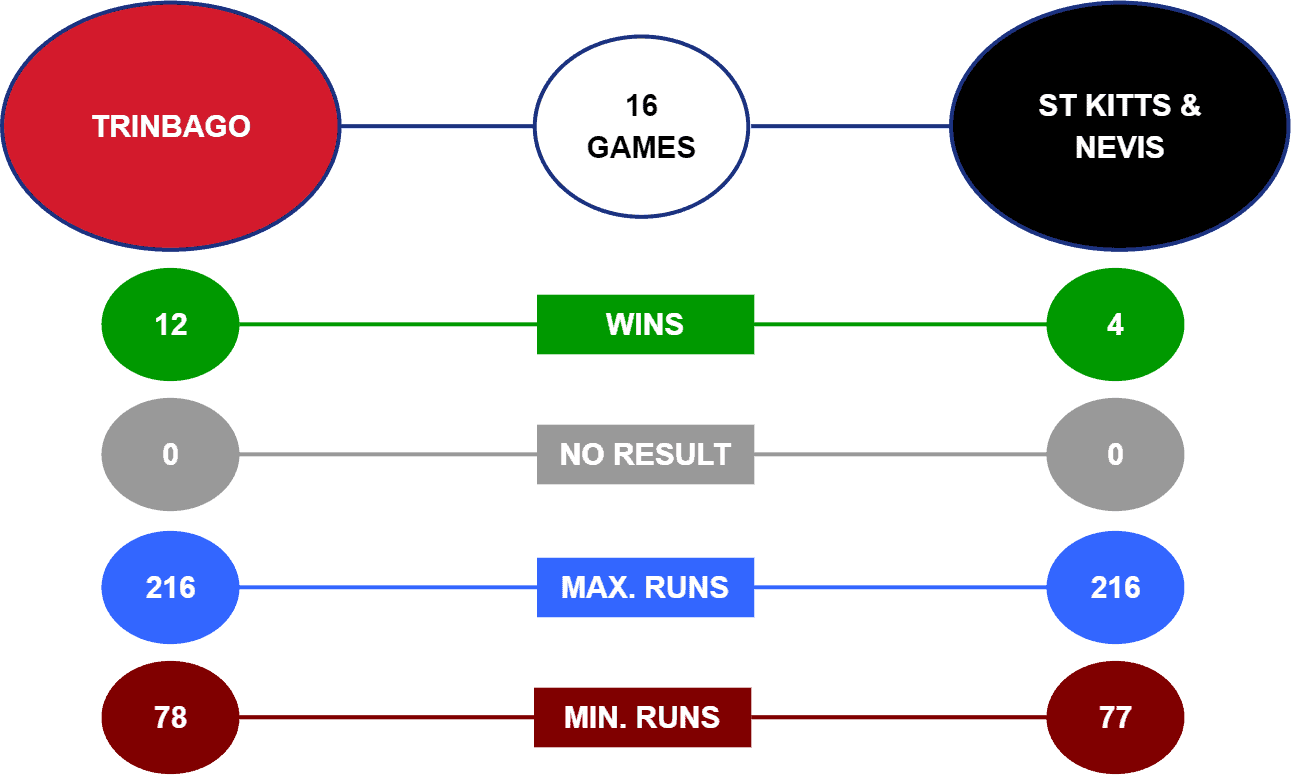 Let’s have a look at the Trinbgo vs St Kitts toss winner predictions. At least Saint Kitts have been competitive when it comes to the toss! It’s 8-8 and I have a gut instinct that the Patriots can at least win this battle.

Recommended Bet: Back the Trinbago Knight Riders  @ 1.67 with Pure Win

Trinbago are getting better and better by the game. We’ve mentioned the four things they’ve done differently and above all, they’ve been smarter than just above everyone else in terms of getting to grips with the wicket here in St Lucia.

St Kitts, as we’ve suggested, are starting to lose the plot a bit.

If they’re losing to teams far weaker on paper than the Knight Riders, what chance do they have against the defending champions, the most successful team in CPL history, the in-form side and the tournament favourites?

Well, of course they do have a chance, but we’d want bigger odds than 2.2 to have faith they could cause an upset.

As explained in our guide to T20 betting, it’s one thing taking a gamble on a team as outsiders at say 2.6 and hoping for the underdog to come good but it’s quite another when we’re offered just 2.2 on a side who look considerably weaker in just about all areas.

We have to go with Trinbago.

Just four batsmen have passed 150 runs for Trinbago and none of them has passed 183, which tells you no-one has been outstanding but rather, that it’s been a team effort where everyone has chipped in.

Of those four, the one with the most runs is Colin Munro, who has had plenty of joy in the CPL over the years.

He’s yet to get to 50 but he’s been pretty consistent, is a class act, knows the wicket well and should bat at number three, worst-case scenario, at four.