Scotland will take on Afghanistan in the T20 World Cup Group 2 in a clash where the Scots will look to leave their mark.

As part of our online cricket betting analysis, find the best Afghanistan vs Scotland betting tips and predictions below.

Afghanistan will start as the odds-on favourite by virtue of their comparatively better squad and a solid bowling attack. However, Scotland have momentum on their side and will fancy their chances following a great run in the qualifiers.

If are to choose a winner between the two, we’d have to go with the Scots. The underdogs have got it in them to deliver a good run and are certainly available at a great price.

We’re backing them in our Afghanistan vs Scotland betting tips & predictions.

If there is a team that knows what it is like rising through the ranks to join the big guns, it is Afghanistan. Not too long ago, they had to take the long way to reach the ‘Super’ stage of the World Cup and now, they are qualifying for the main draw directly.

Looking at their preparations for the showpiece event, Afghanistan have played only three T20Is this year – all of which came against Zimbabwe in the UAE. Rashid Khan’s men won the series 3-0 but apart from that, they haven’t had a lot of practice playing the elite teams.

Since that series in March, Afghanistan’s only other cricketing action came in the T20 World Cup warm-ups last week. They first lost to South Africa by 41 runs and later, handed the defending champions West Indies a 56-run defeat.

In that match against the Caribbeans, Afghanistan posted a massive total of 189-5 to which, West Indies responded with a meagre 133-5.

But the fact remains that the Afghan National Cricket Team has not seen a lot of quality cricket matches this year and may be out of practice. They had to deal with visa issues before assembling in Dubai and not to mention, the troubles at home which will be in the minds of the players.

Perhaps, their motivation to shine is higher than other teams as they look to bring some smiles back home.

Scotland have got wind in their sails and are bubbling with confidence after a fantastic run in the Group stage. After beating Bangladesh by 6 runs in a stunningly shocking victory, the lads moved on to thump Papua New Guinea and Oman on the back of some exceptional cricket.

Now here they are, ready to face the elites of the cricketing world and make a name for themselves.

What has worked superbly for Scotland is the fact that it has been a wonderful, overall team effort rather than relying on the performances of a few individual players. All players have contributed in some way or other, giving Scotland the full-fledged appearance of a complete unit.

With the bat, the likes of Richie Berrington, Matthew Cross, and George Munsey have led the way while in bowling, Josh Davey has been absolutely clinical so far with help from Brad Wheal and Mark Watt.

That said, Scotland haven’t had a lot of cricket experience against the top ICC members – much akin to Afghanistan – but they do have a fairytale that is going on for them at the moment. Their preparations for the Super 12 have been picture-perfect and they could not have asked for a better start than a match against Afghanistan.

We are in Sharjah for this one where the conditions have proven to be precarious for batting but exceptional for bowling. However, just 24 hours before, Sri Lanka and Bangladesh contested in a high-scoring affair which saw 343 runs in total. The Lankans chased down Bangladesh’s 171 runs and won the match by 5 wickets.

So in all honesty, this match can swing either way, especially now that the pitch looks primed for batting. Given that this is a night game in a small-boundary arena, chasing should be the way forward.

Check out our Sharjah Cricket Stadium betting guide for more on this venue!

Looking at the H2H tally between Afghanistan and Scotland, the two teams have met six times and the Afghans have dominated on every occasion. 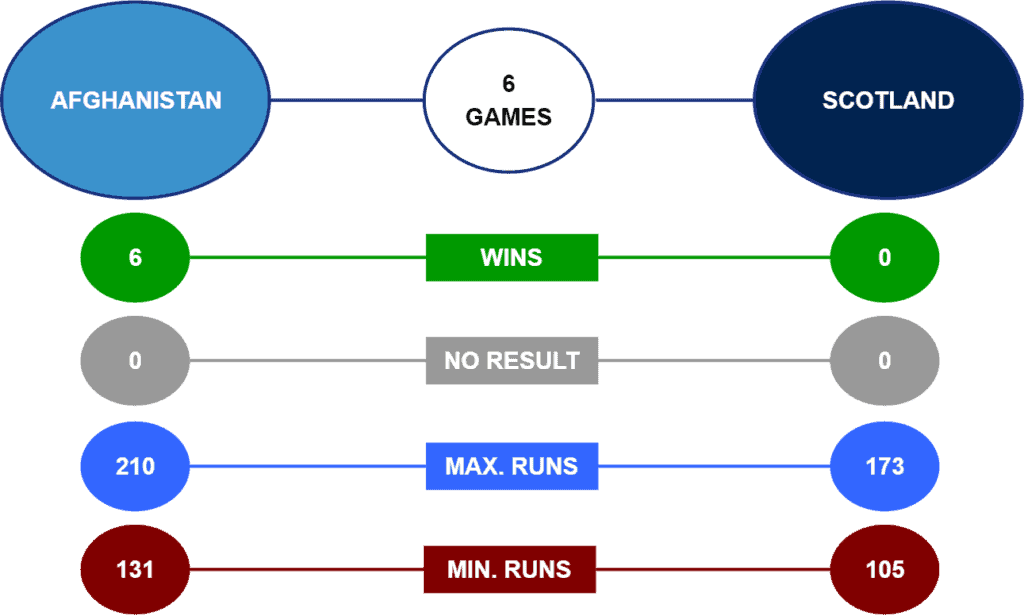 The Afghans have also fared well in the coin toss department, winning the same four of the six times – all of which came in a row.

In our Afghanistan vs Scotland coin toss prediction, let us back the Scots to win it this time seeing that they haven’t won it since 2013.

While this match can swing either way, Afghanistan may not be at their 100 percent. They haven’t had a lot of time to practice and they are heading into the competition on the back of a tumultuous situation at home. Nonetheless, as a full ICC member, their team is of a much superior fitting and on the whole, they are capable of taking on big sides.

Scotland, on the other hand, are as ready as they can be for a fixture of this calibre. They have won their last three matches in a row and statistically, have played more cricket than their Afghan rivals this year.

Admittedly, they are starting as the underdogs (which also explains the high odds on them) but they have given enough reasons to back them. Their players are in fine form and can very well go the distance in Sharjah on Monday.

Rashid Khan is the No. 3 ranked bowler in the ICC T20I Bowling Ranking, which says all there is know about his abilities.

He is well acquainted with the conditions, having picked up 18 wickets for Sunrisers Hyderabad in this year’s Indian Premier League. Alongside Mohammad Nabi and Mujeeb Ur Rahman, he will be leading the bowling attack against Scotland. And between the three, he makes for a more secure, safer bet owing to his experience and stature.

Let’s round things off with some quick stats ahead of the Afghanistan-Scotland game.