It’s the third match of the England v Pakistan T20I Series and this time it’s at Old Trafford starting at 11:00 pm IST on Tuesday, July 20.

I’ve analysed the game and I’m going to bring you the best online cricket betting on it just now, plus team news, a pitch report and some cool stats at the end.

Up next are our free cricket betting tips, exclusively for Indian customers. I’ll talk you through today’s T20I betting odds and you can look forward to a couple of big-priced tips, including one at 8.5.

It’s the big decider and I’m about to tell you why I’m backing Pakistan to bounce back here and win the game…and the Series.

England were really good in the Second T20I, showing that they’re not only a really good T20I side with an excellent chance of winning the World Cup but that they can do so using a variety of players.

For example, skipper Eoin Morgan was rested and not only did Jos Buttler do a good job in his absence as skipper but Liam Livingstone played well in his place as a batsman, hitting 38 off 23 which included two of the biggest sixes ever seen in English cricket.

Buttler was the one who started it all on their way to getting to 200 with a quickfire 59 off 39 but it was Moeen Ali who scored at the most ridiculous rate of all: 36 off 16 at a strike rate of 225.

Add two wickets to the equation and you can see why he was man-of-the-match. Ali has been in and out of all of England’s teams over the last couple of years and this was a reminder of what he’s all about.

Given all the recent chopping and changing, it’s anyone’s guess as to who might play here but Morgan will almost certainly return and Livingstone may get a rest.

Typical Pakistan. An excellent performance is often followed by a substandard one as far as they’re concerned and that was certainly the case on Sunday, following on from Friday’s impressive performance and win.

But then again, maybe the biggest mistake Pakistan made was not batting first. It was a really good wicket and they should have made first use of it.

On the one hand, hindsight is a fine thing. On the other hand Babar Azam has a habit of making questionable decisions as skipper.

That could cost them dearly at the World Cup because basic decisions like knowing what to do at the toss and who to bowl and when really are what the job is about. He needs to get them right more often than not.

Shadad Khan, Shaheen Shah Afridi and Imad Wasim all bowled well given the circumstances; Haris Rauf and Mohammad Hasnain both took wickets but were terribly expensive.

But despite that, they may just stick with the same side, unless Hasan Ali comes in for one of the bowlers, which would at least strengthen their batting. Ali can hit a big ball and if it’s another high-scoring game, that could make a difference.

We’re at Old Trafford this time around, in Manchester. There have been 11 international T20Is played here, all of them involving England because it wasn’t one of the venues used at the T20 World Cup staged in England in 2009.

Of those, England won four, lost three and saw the other four either being abandoned or ending in a no-result.

Now to the interesting bit: England have played Pakistan here four times and only won once, with two wins for the men in green, and a no-result. So Pakistan know what it takes to beat England in Manchester.

The last two games between these two were very high-scoring affairs, with almost 200 reached on both occasions.

Miracle alert: the weather is fine with almost no chance of rain. You don’t often say that about Manchester.

In terms of the England v Pakistan head to head, England are 14-6 up against Pakistan in T20Is, which is a remarkably good record given Pakistan have enjoyed plenty of success in this format.

I expect Pakistan to gain one more win in this format to tally up a total of 7 after the third T20I. 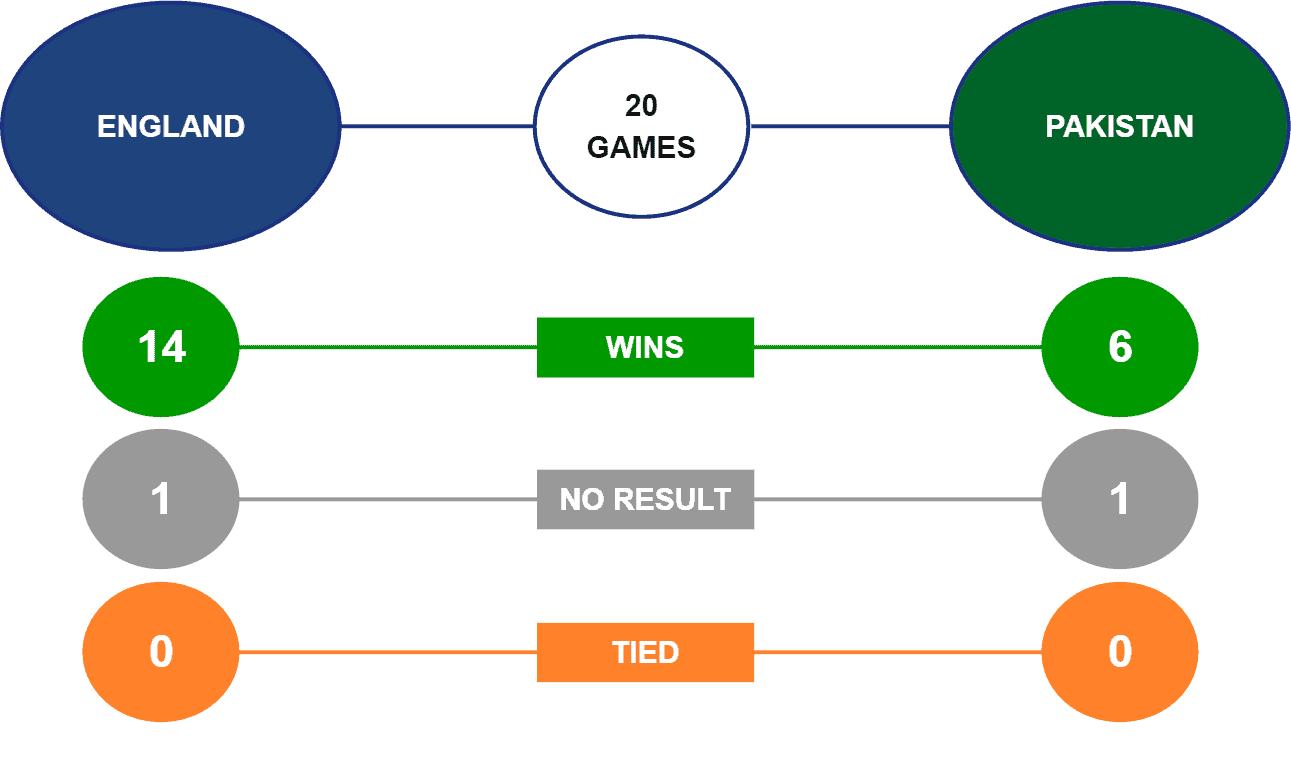 Let’s look at some England v Pakistan toss winner statistics. England haven’t just beaten Pakistan convincingly in the games over the years; they’ve also done so when it comes to the toss.

In 20 times the coin has gone up, England have won it 13, which is a very high strike rate. It was Pakistan who won it last time and it was Babar Azam who made that questionable decision at the toss.

Maybe England lost because Morgan wasn’t there as skipper! Morgan’s good at the toss generally so we’ll go with him to win it.

Recommended Bet: Back Pakistan to win @ 2.68 with Pure Win

Time to pick the match winner now. This time round the England v Pakistan betting odds on Pakistan are 2.68, having been 2.36 on the tourists for the Second T20I and 2.8 in the first game.

That means the England v Pakistan win probability for Pakistan is 37.3%. That doesn’t look right. Yes, England are way ahead on head-to-head and yes they won the last one quite convincingly.

But Pakistan won convincingly themselves on Friday, so it works in both ways and that percentage is too low. Or the odds on them are too high…whichever way you want to look at it.

We all know that Pakistan are going to click some days and not others but we also know when they click, they can beat anyone.

Given they’re considerable outsiders, that ‘if’ element is something we’re happy to accept. I also note Pakistan’s 2-1 winning record against England at Old Trafford as a reason for my tip on Azam’s men.

Check out this Pure Win review for a reminder of why it’s a top betting site.

Recommended Bet: Back Sohaib Maqsood to be Pakistan Top Batsman @ 5.0 with Betway

Azam and Mohammad Rizwan have each won the Top Pakistan batsman market in this Series.  Last time out it was Rizwan’s 37 that won it, though Shadab Khan’s unbeaten 36 came mighty close.

Here’s our ultimate guide to top batsman batting in cricket where I discuss exactly the sort of scenario we have here.

Azam and Rizwan are the likeliest winners because they’re the best batsmen and the openers. But then again, they’re the short-priced favourites.

My strategy ahead of the first two games was to look for alternatives who were much bigger prices and therefore offered better betting value.  As it happens, they didn’t win, but I think the thinking was right. One of the things discussed in that guide was looking for players who bat higher than their odds suggest.

And that’s the case here with Sohaib Maqsood. He’s been batting at three so should have a good chance at least in terms of facing enough balls and though his career strike rate of 116 in T20Is (another factor discussed in the guide) isn’t that high, it’s improved recently.

Recommended bet: Back Moeen Ali to be England Top Bowler @ 8.5 with Betway

And talking of wrong prices, how about the 8.5 on Moeen Ali being England’s top bowler?

As it happens, his 2-32 wasn’t quite enough to win because Saqib Mahmood took 3-33 but he should play here again and with the World Cup coming up in the UAE, England will want to give their spinners plenty of overs in preparation.

He may not bowl all four overs but he should certainly bowl at least three and that could be enough, especially given the odds he is.

And that’s the last of our betting predictions.

Let’s talk stats ahead of the game to round things off.