Want the top West Indies vs England betting tips? Course you do. But in addition to the best bets for the online cricket satta bazar, I also have the latest team news, pitch report and analysis of what happened in the previous match and which players you should look out for.

So just keep on reading and you’ll be fully up to date before they start playing the Third and final Test on March 24, start time 7:30 pm IST, at St George in Grenada.

Up next are our free cricket betting tips, where I’ll explain why I’m switching allegiances from the draw last time (a 4.6 winner for us) to a West Indies win this time. There are four very good reasons for that and I’ll tell you exactly what they are.

I’ll also tell you why I think the Windies will win the toss. So keep on reading for our insight ahead of the decider in what has been an intriguing Series.

Join Us On Telegram!

How will the West Indies be feeling about the Series so far?

Mostly, good. After being on a poor run in Test cricket over the last couple of years (as have England for that matter), they’ve drawn two Tests that they went into as underdogs.

And they showed good fight in both, particularly with the bat.

They got runs on the board and batted time in the two first innings and then showed patience, resilience and determination in batting out two draws late on Day Five.

These are qualities that go a long way in Test cricket. They will have learnt a lot from those games and improved after what happened over the last couple of weeks.

No-one personifies being up for the fight like skipper Kraigg Barathwaite.

He scored 160 and 56 not out in the Second Test, meaning he was on the field of play for practically the whole match.

It went a long way to securing that draw, so no wonder he was man-of-the-match.

And this despite some excellent performances from England players, like Joe Root and Ben Stokes.

It’s the sign of a good team effort when everyone does their bit. And that has mostly been the case over the first two matches.

All the bowlers have taken at least four wickets and no-one has been particularly expensive.

That said, both John Campbell and Shamrah Brooks have scored less than 75 runs for the Series from four knocks, so one of them could make way for Kyle Mayers.

But Mayers is an all-rounder and those two are an opener and a number three respectively, so Mayers would either have to bat out of position, or there would need to be some reshuffling in that batting order for him to come in.

With T20 the big obsession in cricket over the past decade with its big hits and reckless shots, it’s nice to see a proper old-school Test batsman in action. And they don’t come more old school than the Windies captain.

His record is excellent. Average of 34 is very good rather than spectacular but 10 centuries and 25 fifties show this is a man who normally kicks on after making a start.

That his strike rate is just 40 in Tests tells you he has no desire to ‘get on with it’ and knows that Test cricket is about batting time.

Lots of other players in this format could learn from his approach.

He’s averaging 101 for the Series and his 304 runs are more than anyone else in the Series with Joe Root next best on 284.

10CRIC make it 4.04 he’s their top batsman in the first innings and 5.05 that he scores a first-innings century.

And here’s our 10CRIC review where we tell you what we like about one of India’s favourite betting sites.

Having been on a really bad run of their own, England won’t be too upset about having drawn the first two matches, either.

But the truth is that if anyone was going to have won those two, it was them. They were in the driving seat on both occasions, both times having had the chance to bowl the West Indies out on the final day.

That they didn’t had to do with gutsy performances from the Windies with the bat but also the absence of a match-winning bowler in the side.

Jack Leach has improved throughout the Series but maybe if they’d played a second spinner in Matt Parkinson, they could have put more pressure on the Windies on a wearing pitch.

That said, Joe Root should have declared earlier and given his side another hour to bowl them out. It’s not the first time he’s been guilty of that.

England have only ever won one Series in the Caribbean in Test cricket and this is their big chance to make it two.

The problem with Joe Root and England is that they tend to be conservative both with on-field tactics and selection.

So rather than being bold and playing spinner Parkinson, they’re likely to just replace two pace bowlers with another two pace bowlers: Matt Fisher and Chris Woakes making way for Craig Overton and Ollie Robinson.

Much is expected of Robinson by the England management and having been injured for the first two games, now has a chance to impress.

Saqib Mahmodd made his Test debut in the last game and was decent with four wickets in the game, so should keep his place.

Stokes hardly played any cricket at all in 2021.

After getting injured in the first match of the 2021 IPL, he then missed almost all of the English summer bar captaining the side in an ODI Series against Pakistan, after the whole England ODI side had been in contact with people who were positive for Covid and were ruled out from playing.

He then missed the T20 World Cup and did play in the disastrous Ashes series but was clearly rusty.

The all-rounder opted out of this year’s IPL to focus on Test cricket and that looks to be a good decision.

In the Second Test, Stokes took two first innings wickets after smashing a superb 120 off 128 with the bat and is looking sharp: both from a physical point of view and in terms of being in decent touch.

Both England and cricket in general are better for it.

He’s 7.0 favourite with Betway to be man-of-the-match in the Third Test.

We’re at St George’s in Grenada for this one.

Long-term stats aren’t particularly helpful here because only three Tests have ever been played here, the last of them back in 2015.

England won that game with Joe Root hitting 182 in the first innings so he’ll have good memories of playing here.

In terms of domestic cricket, five of the last six games here produced results so this is unlikely to be the sort of pitch we got in the first two Tests; there’s likely to be something in it for both seamers and spinners.

The draw is 2.8 with Pure Win but on this occasion, looks worth avoiding.

Partly because of the expected wicket. But also because there’s no rain but there should be clouds.

So we won’t lose overs to the weather but overcast conditions should assist the seamers.

The West indies v England head to head shows things are pretty tight between these two. England have won 51 Tests, drawn 53 Tests and the West Indies have won 58.

In the Caribbean, the Windies have been strong over the years, winning 25 and losing just 15, with 31 draws. So very much advantage the Windies, when at home.

Having said that, England have just about had the upper hand over the past five years, winning five and losing four, with two draws, both of them in this Series. 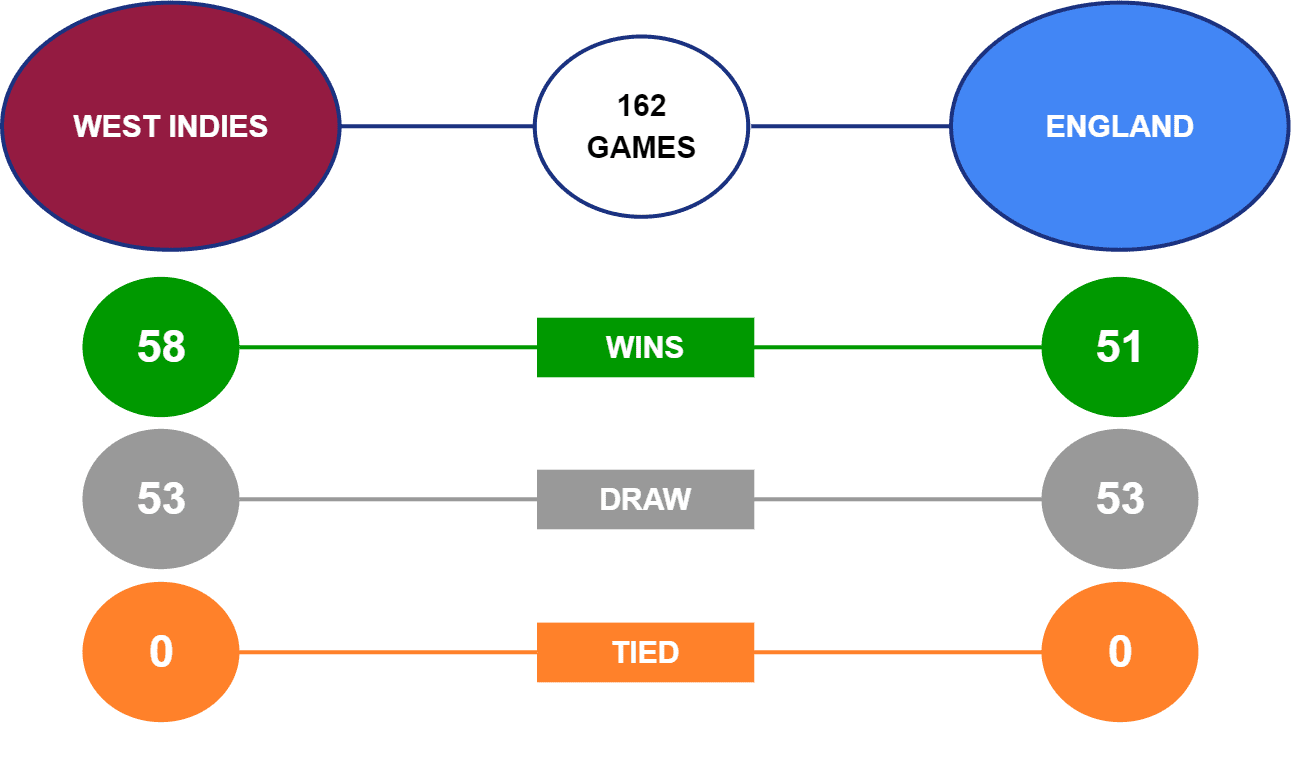 Looking at the West indies v England toss winner statistics and England are ahead, but not by much. The Windies have won six of the last eight tosses, though it was Joe Root calling correctly last week. As he had done the week before.

It may be Brathwaite’s turn this time round.

Recommended Bet: Back the West Indies @ 4.4 with Pure Win

In a fair world, this Series would have a third consecutive draw and would end in a drawn Series.

The next fairest outcome would be an England win after just about being the best side in the first two matches.

But this isn’t about being fair, it’s Test cricket.

You could easily argue that if the Windies had won the first two tosses, they may well have been ahead in the Series or at least would have been the side pushing for victory in them both.

I’m in big profit here after backing the draw last time out at 4.6. So how were we going to play it this time?

I’m going with the Windies.

One: they’re a far bigger price at 4.4 than England at 2.1 for no particularly good reason.

Two: they’re due a toss win which could really help their cause.

Three: this wicket should produce a result.

And four: let’s remember Egland have only ever won one Series here so they’d be (sort of) making history.

The Windies it is.

Here’s our Purewin Review, where we explain why we think it’s a good and honest betting site.