After India went 2-1 up in the Series at Lord’s, we move to Old Trafford in Manchester for the crucial Fifth and final Test. It starts on Friday, September 10, start time 3:30 pm IST.

The best England v India betting tips ahead of this match are right here, including the best online cricket betting odds and sites. So just keep on reading and in addition to them, we also have the latest team news, some stats and the pitch report.

Want some free cricket betting tips? Course you do. With India 2-1 up and rain on the horizon, the draw looks like by far the best option of the three.

England suffered one of their most painful defeats in a while in the Fourth Test. A few things to think about. How they let Sharduk Thakur smash 57 off 36 in India’s first innings is anyone’s guess.

Yes, he can bat, but he is after all a Number 8 only playing his Fourth Test ever and that sort of strike rate (158) would be considered excellent in a game of T20, let alone Test cricket.

And that’s only half the story! In the second innings, they let Thakur score 62 off 72, which effectively ended any England hopes of actually winning the match.

Other ‘crimes’ they committed were the needless run out of Dawid Malan and their numbers 5, 6 and 7 getting out for just 2 runs when they really should have batted out a draw on the final day.

It’s a reminder that this England team is not a particularly great one and that the only reason they were actually competitive in this Series was because of how well Joe Root batted.

At least, there’s some good news. Jos Buttler is back from paternity leave and could be in for Jonny Bairstow.

Mark Wood is available. Poor old Jack Leach, who hasn’t played all summer and has spent weeks on end carrying drinks, has been recalled to the team. But I can’t see him getting a game.

Craig Overton looks vulnerable and is likely to be dropped after a couple of ‘nothing’ performances.

Half the cricketing world has been wondering why Ravi Ashwin hasn’t been playing this Series.  He is after all, arguably the best Test spinner in the world. Half of those people suspect that skipper Virat Kohli doesn’t get on with him on a personal level and that could be a big factor in his omission.

But the truth of the matter is that India are 2-1 in England and can’t lose the Series. In fact, they’re almost guaranteed to win it.

So Kohli will almost certainly be proven right after all.  In my opinion, it was pretty scandalous that Thakur wasn’t man-of-the-match. 117 runs from number eight in the match, to go with three wickets. What more did the guy have to do?

In the end, they gave it to Rohit Sharma for his excellent second innings 127 but I think Thakur was hard done by. Thakur looks a great find if he can consistently take wickets and contribute lower-order runs, like he did at Lord’s.  Ajinkya Rahane would be extremely lucky if he plays here, because he’s been desperately short of runs.

If it were me, I’d play Hanuma Vihari instead as that also gives them an extra bowling option.

England have been excellent at Old Trafford over the last few years. They’ve won six of the last seven played here in Manchester. Of those wins, back in 2014, was against India.

The one defeat in that sequence was against Australia. In nine matches played at Old Trafford between these two, India have never won. They lost four times and drew five.

The weather forecast suggests there could well be rain on the first day and that there could be some showers on each of the next four days. So a very good chance that quite a few overs may be lost to the weather.

Time to look at the England v India head to head. These two have played each other 129 times since their first encounter way back in 1932. England are 49-31 ahead on wins but interestingly, it’s actually the draw that has popped up the most times with 50 draws played out over the years.

India can’t lose the Series now and avoiding defeat here obviously means they’ll win it. It tells you all you need to know about where these two teams are in terms of Test cricket. India may have lost the World Test Championship but few would argue they‘re not the best side in the world. 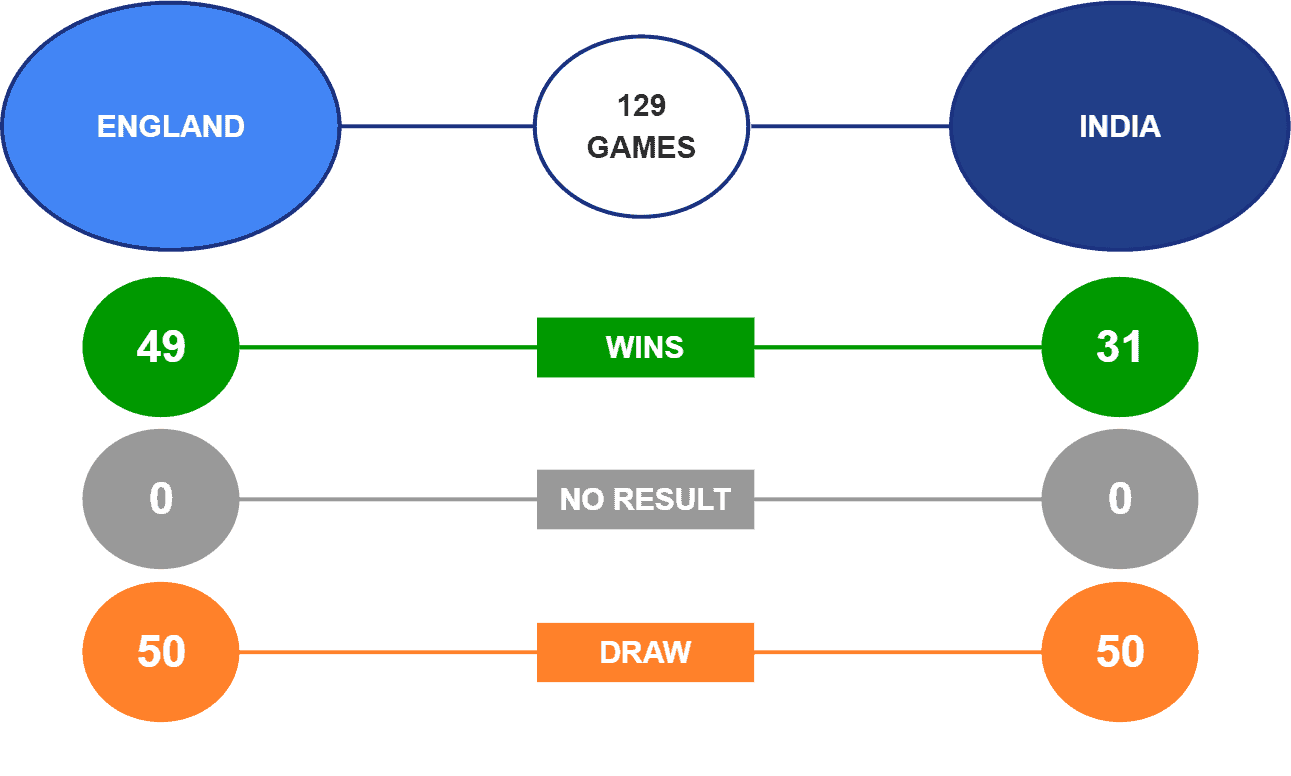 Right, time to look at some England v India toss winner statistics over the years. If ever you wanted to look at an exercise in how probability doesn’t lie, just look at the stats between the two when it comes to the flip.

It’s almost exactly 50/50, despite the coin being tossed 129 times. However, England may well pull further ahead if Kohli carries on being India captain for much longer! He lost the toss yet again at Lord’s and must surely be the unluckiest cricket captain in international cricket when it comes to the coin flip.

Good thing he makes up for it in other ways. I simply have to go with England again.

Time for my England vs India match prediction. There are good reasons to back the draw, despite the fact there hasn’t been one in any of the last seven Tests played here.

The first is obviously…rain. We lose as many overs as I think we might, then of course that massively increases the chances of us getting a draw.

It should be remembered that in both of India’s wins this Series, they left it pretty late on Day Five to wrap things up so if there is rain, there might not be enough time in this game to allow for a result. But the biggest factor of all is that India don’t need to win.

I can’t see Kohli being so greedy that he’s so desperate to win the Test that he’ll take the sort of risks that mean he could lose it. They’ll bat and bat and bat and do their best to take time out of the game without even so much as thinking of a declaration at any stage. As for England, I simply don’t think they’re good enough to win it with this set of players.

Here’s our 10CRIC Review if you want to learn more about this safe site with great odds!

Pujara is ranked fourth for the most runs scored across both teams with 227 runs and has scored two fifties so far at an average of 32.

But by his extremely high standards, it hasn’t been the most profitable Series for this run machine.

This is the man who has made a reputation for himself by occupying the crease, blocking and defending when necessary, while punishing the bad balls when they eventually come along.

But this may be just the sort of match made in heaven for him. That’s because the name of the game for him is just to bat time and few do it like him. After all, ever since making his Test debut for India in 2010, he’s always been dubbed the ‘next Rahul Dravid’.

He will have played here before thanks to his time with Yorkshire and Nottinghamshire in the English County Championship and odds of 5.0 for a player of his class, are just too good.

Haseeb Hameed hasn’t had it all his own way in cricket.  Having made his debut for England as a teenager he then had to wait for years to get a second chance for England and in between, he was released by Lancashire in 2019 because quite simply, he wasn’t getting any runs.

But he’s trying to make the most of his comeback and has already hit two fifties in this Series since coming in for the hapless Dom Sibley.

The clue that he might do well here is that he used to play for Lancashire, who of course play at…Old Trafford.

He played plenty of First-Class cricket here so will know the wicket and the ground dimensions well.  He’s a good price at 6.0 for a man in form who knows the ground so well.

Shall we look at some cool England v India stats? Let’s do it.