It’s the Second Test between India and New Zealand on Friday, December 3, start time 9:30 am IST, the game taking place at Mumbai.

If you’re looking for cricket online betting for the game, keep reading.

In addition to the team news, head-to-head record, pitch report and important stats, we also have the top India v New Zealand betting tips coming up next. That includes a surprising selection on the match-winner market.

So, everything you need to know before the action gets underway at the Wankhede Stadium in the Series decider.

The best betting predictions for Indian cricket games are up next. I’m sticking with the same bet that I had last week ahead of the First Test. So if you read the tips last week you’ll know what it is. If not, here’s a clue: New Zealand win good, draw ok, India win bad!

There’s also a tip on a Kiwi bowler to take the most first innings wickets. His record when it comes to that is excellent.

India will probably feel they did everything but win the First Test.

Twice they posted decent totals with the bat, their declaration wasn’t as late as many observed and they took nine of the 10 wickets they needed to win the match.

One more ball that kept low or one batsman mistake and they would have been home and dry.

But that’s Test cricket for you and even though India were the only side who looked like winning during Day Five, they just didn’t do quite enough.

Just about everyone played their part but special mentions go to centurion Shreyas Iyer who was man of the match on debut and the three spinners Axar Patel, Ravindra Jadeja and Ravi Ashwin.

They all took wickets and for good measure, Ashwin and Jadeja contributed with runs, too.

Virat Kohli returns after taking a break on the back of his IPL campaign, quickly followed by the World Cup.

Over the last week, he batted in the nets, worked on his fitness (as if that was needed) and watched India in action.

Iyer probably wouldn’t have played if Kohli had been available but now that he played so well (scoring 105 and 65), he can’t be dropped.

So Kohli’s return means someone has to step aside.

They seem to like playing five bowlers, of which Jadeja and Ashwin are also very good batsmen, so it’s unlikely they’ll leave a bowler out to accommodate the return of Kohli.

So, it could be one of Ajinkya Rahane or Chet Pujara making way. If so, which one?

Or maybe Mayank Agarwal is left out with Pujara or W Saha asked to open.

My gut feel is that the least disruptive move is to bring Kohli in for the man who stepped in for him as skipper, Rahane.

Not least because the number 4 position he batted in, is precisely where Kohli bats.

This week Ravindra Jadeja became the highest-paid player in the IPL. Or at least, until the auction is held in early January.

At that stage there’s a possibility that one or more new signings might go for more than Jadeja, who was the highest-paid retained player.

Yeah, he’ll earn more than the likes of MS Dhoni or Virat Kohli. Now, of course, IPL and Test cricket are two very different things; they couldn’t be any further apart.

But it shows you just how the real cricket connoisseur appreciates the all-round talents of Jadeja.

If he’s not taking wickets, he’s scoring a quick 40 or 50 with the bat and when given the chance, taking a blinding catch in the field. Or orchestrating a run-out.

It says a lot that against England in the summer, they went with Jadeja over Ravi Ashwin, then ranked the number 2 bowler in the world.

His numbers in the First Test tell their own story: he scored a first-innings fifty and took five wickets in the match.

Expect a repeat performance here from the man who can do everything.

If you can’t win a Test match, make sure you don’t lose it.

That must have been the message midway through Day Five when after losing a flurry of wickets, the total was never going to be reached.

So it’s credit to the team as a whole that almost every last player played their part in ensuring they at least secured a draw.

In Test cricket it’s sometimes just as much about how much you want it as natural ability.

Special credit must go to debutant Rachin Ravindra, who survived 91 balls on his way to saving the draw, William Somerville for seeing off 110 balls as night watchman and even Ajaz Patel for playing out 23 balls without getting out.

With the ball Tim Southee took eight wickets in the match and Kyle Jamieson six.

But New Zealand will need more from their spinners this time round.

The pitch at Mumbai generally takes less spin than other Indian grounds so New Zaland may decide to play veteran workhorse Neil Wagner, a fast bowler, ahead of spinner Somerville.

That would leave Ajaz Patel and Ravindra as their two spin options and even Williamson himself can bowl some spin if necessary, though he hasn’t in a while.

With Southee and Jamieson playing so well in the First Test, there’s no reason why either of those should be left out.

But other than Wagner’s possible inclusion, the rest of the team should be the same.

One player we didn’t mention before as one of the heroes in that draw was Tom Latham.

Knocks of 95 and 52 went a huge way to securing that draw, not just in terms of the runs scored but the time spent at the crease.

For good measure, he top scored for his team in both innings.

He’s averaging 42 in his Test career, which is excellent for an opener, and at 29 is showing just the sort of maturity needed from an opener in tough away conditions.

How long he hangs around for will have a huge impact on New Zealand’s fortunes. It’s 3.5 with Betway that he scores a first innings fifty.

History suggests the Mumbai wicket should spin but then again, this is the first Test played there in five years.

So, we’ll have to wait and see because T20 matches don’t paint a good picture of what wickets will do in long games.

There’s been plenty of rain leading up to the Test in Mumbai but the forecast isn’t that bad for the game itself. That said, we’ll probably lose some overs at some stage.

Whoever wins the toss will want to bat first, get 350+ runs on the board and hope spin comes into it later.

In the India v New Zealand head-to-head, they’ve played each other 61 times over the years. The Black Caps have won 13 of them, India 21 and the draw has been the most common result with 27 instances of it. There was obviously a draw in the First Test, making the draw even more frequent among these two now.

The picture looks even bleaker for the visitors when just looking at matches played in India: they’ve won just two in 35 attempts, with 17 draws and 16 India wins.

That draw in the First Test means there have now been more draws in India than India wins here. 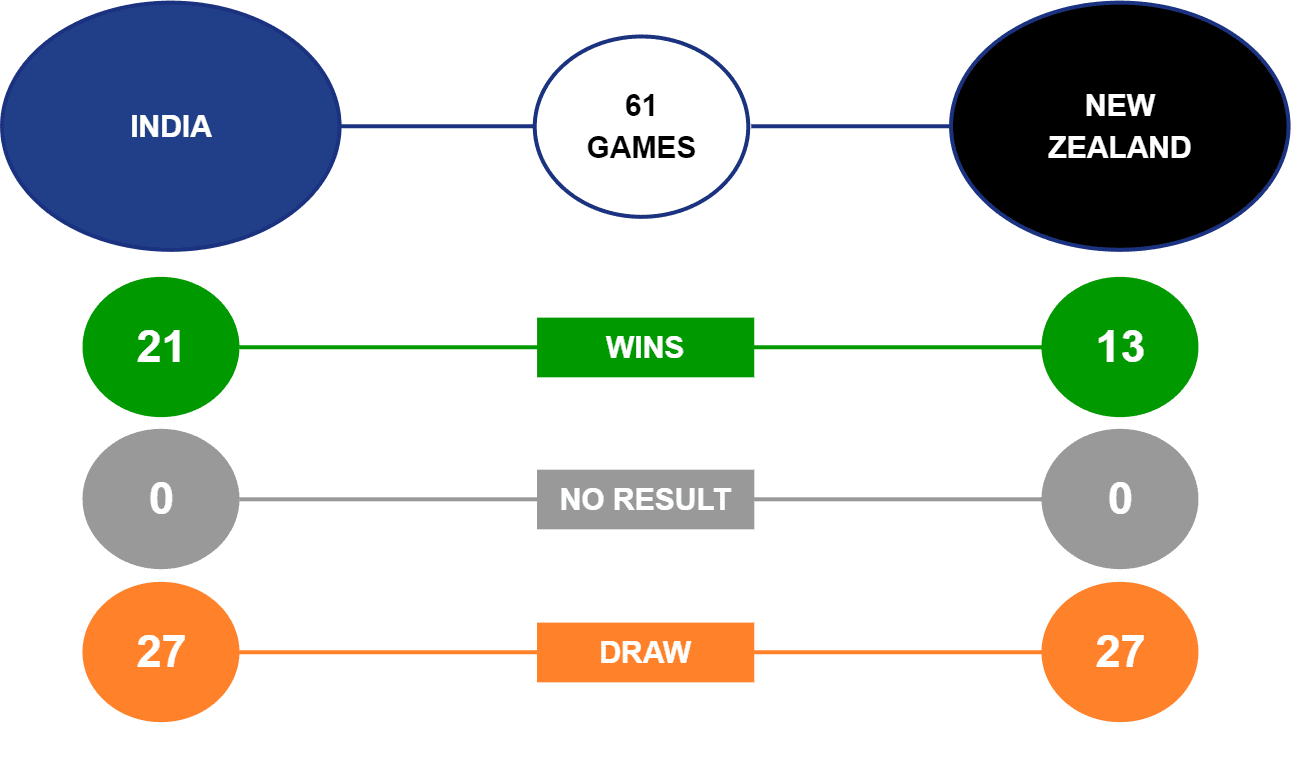 Time to look at the India v New Zealand toss winner statistics. Things are remarkably close with India just ahead by three toss wins over the course of 61 games.

We normally have a rule that we’re always against Virat Kohli when it comes to toss. And there’s no reason to abandon the rule here!

Go with New Zealand to level things up by winning the toss this time.

Last week we had New Zealand Draw/No Bet. A reminder that means we would have won at big odds had the Black Caps won but got our money back when it ended in a draw.

And yes, New Zealand didn’t look like they’d win the match at many stages during it and were probably a bit fortunate to get a draw at all.

But none of that is to say it was a bad bet. Or that we shouldn’t stick with the same bet.

One of the key things to note is that India won the toss last time and that gave them a huge advantage straight away.

That’s because it’s always tough to bat in India on Day 4 and 5 pitches because they crumble and turn.

So if New Zealand win the toss and bat first this time, the shoe could be on the other foot.

If that were to happen they’re quite unlikely to lose and by having this sort of bet rather than the straight win (albeit at bigger odds) we also have the draw covered.

This could happen for two reasons:

So we simply have to be with New Zealand as the match-winner, with that insurance on the draw. Especially because India are after all missing three or four first-choice players.

Kyle Jamieson has certainly impressed during his young Test career. He’s played 9 Tests and already taken 52 wickets. That’s an average of almost six wickets a game and three an innings.

It means he’s the fastest New Zealand bowler to 50 Test wickets, overtaking the great Shane Bond, who needed 12 Tests to get to 50.

And he’s something of a first-innings specialist because he makes use of any bounce and swing early on. He bowled with excellent rhythm in that First Test.

As it happens, his three wickets in the first innings were beaten by Southee’s five but it shows how consistent he is.

Let’s hope he’s even better this time around.