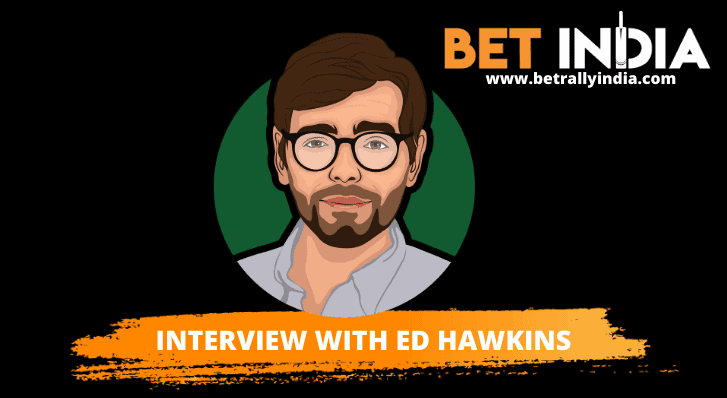 Bet India recently had a chat with an old friend, Ed Hawkins about online cricket betting as well as some interesting details about top bowlers and batsmen within the sport. Get the full interview below for some top insights from a true cricket betting expert!

What are the advantages to betting on cricket compared to another team sports?
Which format do you find easiest and hardest to bet on match-winner pre-match?
What are the most important factors you consider in Test Matches?
Most cricket tipsters tend to combine the use of hard data with gut instinct and/or opinion. But you’re just pretty much about the data and don’t use much opinion. Is that a fair assessment?
Which is your favourite of the T20 franchise leagues to bet on and why?
Who are the three most reliable bowlers and batsmen in the world to bet on?
What do you make of the BCCI’s decision to essentially sack Kohli as ODI skipper and what do you think actually happened there?
Early days yet but give us your best tip for the 2022 T20 World Cup.
About Ed Hawkins

What are the advantages to betting on cricket compared to another team sports?

There are so many variables to get to grips with that, once you do, you can exploit and find a betting edge. The number of different formats, for a start. We’re at five and counting after the introduction of The Hundred in the English summer of 2021. And there are advantages to each of them.

Test cricket, for example. In-play wagering is made much easier because if you’re someone who has watched the game for a long time you will instinctively have a feel for the rhythm of the format. To that end, it is written into the rules when batting will be easier or harder because of the new ball at the start of the innings and 80 overs later.

It is a relatively easy task to apply that knowledge to shorting a team’s runs just before the second new ball. Or going long after the first 15 or so when the ball has been swinging.

T20 is similar because of the powerplay overs. We know when runs are going to come fast and slow. And you can bet accordingly.

Which format do you find easiest and hardest to bet on match-winner pre-match?

I think T20 is a format which, perhaps, you can be a little free and easy with pre-match. It is far from a mug strategy to be betting on the outsider for the majority. And I have a rule not to bet any team at 1.6 or lower unless they are one of the ‘great’ T20 sides like a Super Kings or Scorchers. A team really has to have shown its class over a good study period for me to get involved at such prices.

Post toss, T20 also offers big value because we have seen significant toss biases all over the world (the recent T20 World Cup for example) and the markets were slow to catch on. Often you can marry a toss bias with a team bias.

Over the years we have seen teams who are great at chasing but not so hot at defending. Sydney Sixers were poor at defending for a long time but have got better.

I do have a strong view that Test cricket is not one to play without knowing who bats first. There is evidence that runmaking is getting tougher because batting techniques have eroded with the rise of the white ball.

And when we so often see mismatches in Test cricket, largely because of conditions outrageously favouring the home team, you kind of need something to hang your hat on for an outsider. And that is scoreboard pressure and a wearing fourth- or fifth-day pitch. On the latter point, it still amazes me how often the markets underestimate how hard it is to bat on the fifth day.

What are the most important factors you consider in Test Matches?

Pitch. Pitch. Pitch. There’s nothing worse than not having a good study period to fall back on for what a surface might do. The fifth Ashes Test at Hobart is an example. There was evidence at Test and first-class level that it was either a road or a terror track.

That’s horrible for punters because we really should be trying to run through the game in our head, looking at the style of batters and bowlers on show based on what the wicket has and hasn’t done.

Head-to-heads are more important in Tests than most. Not because it is vital to know how England did in India in the 1990s but because it reasserts stereotypes that are so important.

English, South Africa, Australian teams go to Asia and struggle because the pitches are alien. And by and large the same is true for the reverse fixture. Why? Because they just have less experience in handling those conditions.

Most cricket tipsters tend to combine the use of hard data with gut instinct and/or opinion. But you’re just pretty much about the data and don’t use much opinion. Is that a fair assessment?

I think so. Although I never used to be that into data. I was an ‘eye’ punter. I watched players very carefully, working out techniques and betting accordingly. Now I try to combine that with statistics which suggest a player is value to top score or take most wickets.

I made the switch because in this social media age you were always likely to come across someone who could explode your argument about why so and so playing round his front pad made him a walking wicket with an obscure but mind-blowing stat about his record on match-ups against individual bowlers.

You really have to be across so much of the data these days. And the best news is that if you can get your hands on more of it and still judge players, there are very strong edges to be found.

Which is your favourite of the T20 franchise leagues to bet on and why?

I enjoyed the last Caribbean Premier League because there were top-bat ricks all over the shop. The IPL is consistently good, though, because its unpredictability is so predictable.

And you really have to separate what happens in the IPL from all other franchise leagues in terms of form. So that makes it a great challenge, especially if you’re looking to enjoy some IPL betting too.

Who are the three most reliable bowlers and batsmen in the world to bet on?

Well, it’s constantly changing of course in terms of win rates, which means that a player had to have a higher percentage win rate than his implied probability. But in ODI Rohit Sharma, Quinton De Kock are often underpriced for top bat even though favourites.

Keep an eye on Imam-ul-Haq for Pakistan, too, if he returns to the side. In T20 Dawid Malan for England likewise, De Kock again and the brilliant Babar Azam. KL Rahul for Punjab in the IPL was Mr Reliable.

In Tests, Ben Stokes was underrated for a long time and 9/2 or 5s is still a play. Marnus Labuschagne is not quite short enough still. And a big-priced guy to look out for is Faheem Ashraf for Pakistan.

Bowlers are harder to find on win rate. But in Tests, you won’t go far wrong with Ravi Ashwin, Josh Hazlewood, Kemar Roach. Lungi Ngidi is superb in ODI and should be favourite every time ahead of Kagiso Rabada. In T20 there aren’t many who stand out on win rates but Ngidi is also underrated there. Muhammad Hasnain is value in the franchise leagues.

As important as finding a guy underpriced is those who are overpriced. And Joe Root, despite his dominance, has a price no way near his actual win rate which isn’t touching a 4/1 chance.

What do you make of the BCCI’s decision to essentially sack Kohli as ODI skipper and what do you think actually happened there?

I think the BCCI recognised that Rohit Sharma is a better white-ball leader. Their respective records in IPLs speak volumes. It gives India time to build under a new captain for the next tournament and reducing Kohli’s influence is no bad thing across the three teams.

He was the kingmaker across three teams and even when you take into account that it’s just not possible to be ‘on it’ in all three with the scheduling, it’s never great to have one guy pulling all the strings. India will be better off for it.

I’ve been saying it for a couple of weeks but England are underrated at 4.5. They’re favourites for me in Australia because the pitches suit their batters and they won’t have to worry about the toss bias downing their chances like it did in the UAE.

They were the best team in that tournament, with Pakistan a close second. Remember how they murdered Australia? They were on a different planet.

And you never know, England may be able to call on Jofra Archer which will take their game to a new level. They have such a deep reserve of T20 players that they could be a very, very strong side by October. I make them favourites ahead of India and Australia. Pakistan’s chance has gone as I don’t see them flourishing on bigger grounds.

Ed Hawkins is an award-winning sports journalist. He has three times been named the Sports Journalists Association’s Sports Betting Writer of the Year.

He is also a cricketing analyst, journalist, anti-corruption expert and published author and currently the cricketing correspondent for betting.betfair.

His book, Bookie Gambler Fixer Spy was shortlisted for the William Hill Sports Book of the Year award and was Wisden Cricketers’ Almanack 2013 book of the year. He won the William Hill in 20021 with Michael Holding for Why We Knee How We Rise.

He lives in London.