Today’s CPL 2021 betting sees Jamaica take on St Kitts and Nevis at Warner Park, this game takes place on 8 September, with a start time of 7:30pm IST.  If you want the latest cricket betting available on Indian websites, read on because we have the best Jamaica Tallawahs v St Kitts and Nevis Patriots betting tips coming up next.

Here, you’ll find an explanation as to why Jamaica are something of a one-man team and who that man is! Clue: he’s a big IPL star. So I much prefer the far more consistent table toppers that are the Patriots and I like one of their opening batsmen at a very decent price. Find today’s free cricket betting tips below!

Want to find the latest info on all things cricket? Download Bet India’s Telegram Channel – you’ll be privy to the latest and greatest news coming out of the Caribbean Premier League!

The consistently inconsistent Tallawahs must be a frustrating team to watch if you’re a fan of theirs.

Brilliant one day, awful the next. But maybe that’s no surprise.

It’s all well and good spending so much money on star man Andre Russell but it means the balance is all wrong.

Look at it this way: other than Russell, which other players in the side would the other CPL teams want to have for themselves? Maybe Carlos Brathwaite and Imad Wasim. But that’s about it.

And if they do have such a brutal batsman in Russell, then why on earth are they batting him down at 8? It’s insane.

Skipper Rovman Powell has been out of form as well. However, all is not lost.

With no team making any real push for fourth place, a couple of wins in a row may still give them a chance of the Playoffs.

St Kitts and Nevis Patriots now lost two in a row and will be extremely grateful that they won five in a row before that. It means that a) they’re almost guaranteed a Top 4 finish and b) they ‘should’ really finish Top 2.

Winning this one would almost guarantee that they do and would give them two bites of the cherry at making the final.

Openers Evin Lewis (236 runs) and Devon Thomas (161 runs) have more than done their jobs at the top of the order.

And all the bowlers have played their part as well, even though none of them has really stood out. It’s been more of a team effort in that regard.

But they may have a problem with Dwayne Bravo. The skipper, a four-dimensional player who bowls, bats, fields well and is the skipper, has an injury.

Not only do they miss his clever bowling and lower-order big-hitting, but there’s a far greater energy to his captaincy than there is to that of Chris Gayle.

Worked out how Warner Park is going to play next? No, me neither. That’s partly a joke but first-innings scores really have been all over the place and it’s made it very hard to figure out what’s a decent total and what isn’t.

However, it;’s becoming somewhat apparent that the advantage probably lies with chasing at the moment. The last few games have had a slight bias towards team batting second, which is very much in line with the long-term stats for this ground. But remember to read our T20 betting guide to consider the other important factors you should consider before diving in and just backing the chasing side

Very tight indeed. In 14 games between the two across, it’s 7-6 to the Patriots. In fact, it couldn’t be any tighter than that because they’ve played a13 games and one was a no-result.

Things have been equally tight recently, as well. One win each and that no result. 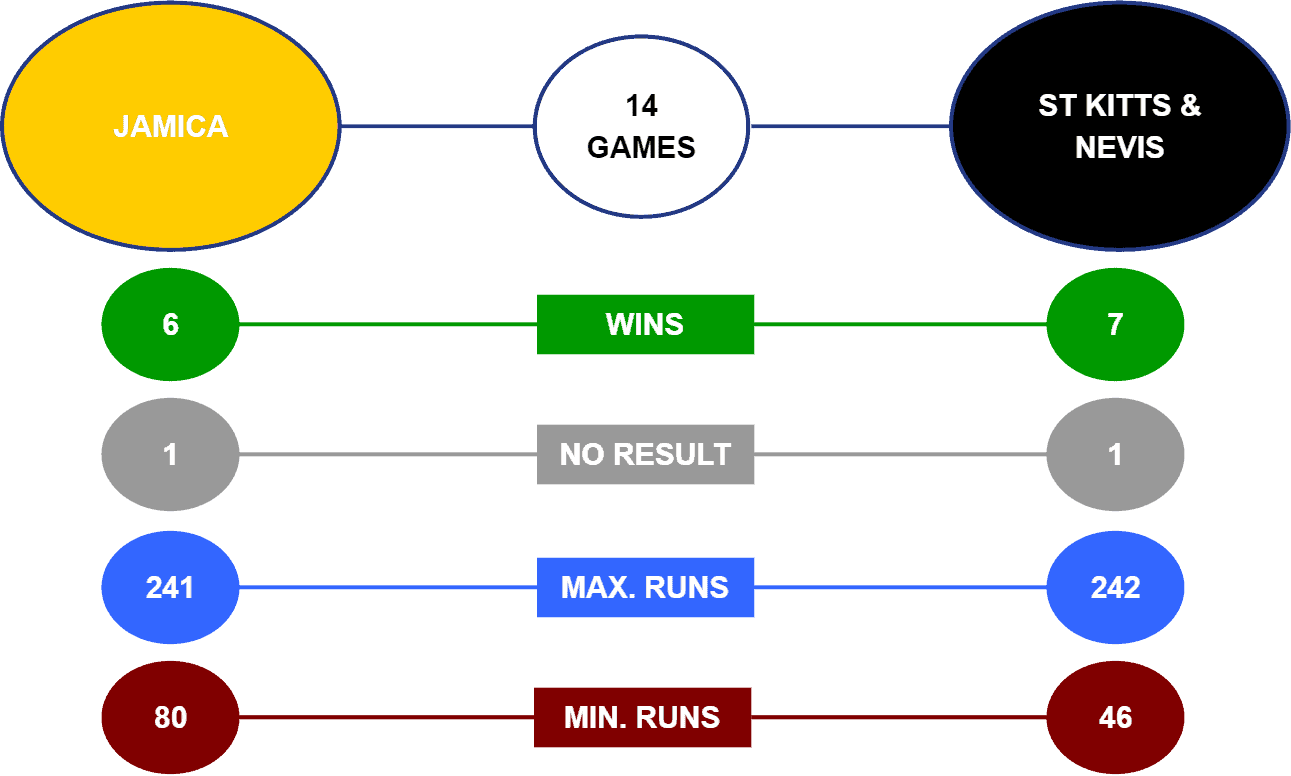 Not so tight when it comes to the toss winner prediction. St Kitts have certainly had the better of things in this regard and are considerably ahead. Let’s go with the Patriots to get the better of the flip once more.

Recommended Bet: Back The Patriots to win @ 1.65 with Pure Win

It’s almost impossible to make a case for Jamaica who have a dangerously bad combination of players being badly out of form and making poor decisions, both on and off the pitch.  Starting with the decision to bat Russell so low down which we’ve mentioned already.

St Kitts have admittedly lost their last two but we’ve discussed already that may just be a blip rather than the start of loss in form.

Add to the equation St Kitts’ slightly superior record on head-to-head and they have players who are performing in all the positions and it’s not a hard choice to make.

Recommended Bet: Back Devon Thomas to be St Kitts Top Batsman @ 5.0 with 10CRIC

You can see why Evin Lewis is the favourite here at 3.65. He’s the team’s leading run scorer with 236 and is a regular for the West Indies.

But at a far bigger price of 5.0 you can back his opening partner Devon Thomas, who has also been pretty good with161 runs, as the team’s third-highest run scorer.

Admittedly, his strike rate is pretty low at 98 given Lewis’ is 147. But as explained in our top batsman betting guide, that’s not so much of an issue given he’s an opener. It’s not so important that he scores quickly; it’s more important in this case that he doesn’t get out.

He’s too big a price for an opener.