After the very best and also very free T20 World Cup betting tips for the Pakistan vs Australia semi-final? Of course, you are. Cricket matches don’t come any bigger than this! Here you’ll find a summary of how both teams did in their previous match, the likely line-ups for both sides, a pitch report and some good stats.

If you’re looking for online cricket betting action, you’re about to get it so just keep on reading! The game takes place at Dubai on Thursday, November 11, start time 7:30 pm IST. Up next are my Pakistan vs Australia betting tips!

Today’s Pakistan vs Australia betting odds have Pakistan as favourites. And it’s Pakistan I’m going with. I’ll outline the reasons for that and explain why they’ve got more going for them ahead of this one than the Aussies.

There is also a cricket prediction on the toss winner and I’ve picked an in-form Aussie spinner who loves it in Dubai to do the most damage and be their top bowler. It will give us a serious profit if he wins!

These tips are free and exclusive to Indian readers!

Pakistan are the only side to have won all their Group games. No side will ever be perfect but it’s hard to find faults in how they’ve gone about things so far.

With the ball, there’s no weak link as their trio of fast bowlers in Shaheen Shah Afridi, Haris Rauf and Hasan Ali have mostly always been on the money, while spinners Imad Wasim and Shadab Khan haven’t given opposition batsmen any respite.

With the exception of Mohammad Hafeez, who has only bowled a handful of overs, every bowler has taken at least four wickets and the only one who has been a bit expensive has been Hasan Ali, going at 8.57.

All the rest have economy rates of seven or under; in the case of spinners Wasim and Khan, it’s under six.

Mohammad Rizwan and Babar Azam have done most of the run-scoring and Azam is the top runscorer for the tournament.

Rizwan is 50 runs behind him and both are contenders for ending top of the runs charts.

When they’ve needed some late order runs, as was the case against Afghanistan for example, one of Hafeez, Shoaib Malik or Asif Ali have come in and smashed it.

The one and only weakness may be Fakhar Zaman at three, who hasn’t really got going. But that’s splitting hairs, because they’ve been excellent.

They’ll have the luxury of fielding the same XI for the sixth game running.

Whatever happens from here, Australia have proved plenty of people wrong. And you can’t blame folk for having written them off.

Their form in the UAE was poor, Aaron Finch and David Warner were badly out of form, Steven Smith shouldn’t have been in the side and Mitchell Starc hardly plays any T20 cricket at all these days.

But they only lost to England, their bowling has been excellent and Warner is averaging almost 47 for the tournament.

The two best bowlers have been the slightly less rated ones: Starc and Pat Cummins are the two big stars, but it’s been Josh Hazlewood and Adam Zampa who have really stood out.

They have a big decision to make: do they play Ashton Agar?

If they do, they have five frontline bowlers and don’t have to worry about finding four overs from the likes of Mitch Marsh, Glenn Maxwell and Marcus Stoinis.

But that would mean dropping a batsman and having Agar at seven, a place too high. If they don’t, they could be vulnerable in terms of their fifth bowling option and Pakistan will surely target that trio.

We’re in Dubai for this one. The weaker sides like Bangladesh and Scotland struggled to even get to 100 batting first against the stronger ones which suggests it’s hard to score runs here.

But this is also where India posted just 110 against New Zealand. Yes, even Virat Kohli has since admitted that was a poor effort, but it does show that even the best batting line-ups can find life tough here.

Either way, it’s hard predicting what might be a par score.

It’s much easier to predict that the side winning the toss will chase and be in an advantageous position from the off.

I’m going to take this opportunity to explain why I think batting second is such an advantage:

Either way, batting second here will be a huge boost to whichever side gets to do it.

Pakistan are 13-9 ahead. No big surprise. They’ve probably been the best and more consistent side in T20Is since the format was invented, including winning the World Cup once and making a further final.

When they played a three-game Series here in the UAE, Pakistan won it 3-0, back in 2018. So that bodes well for Pakistan. However, Pakistan will still have nightmares about the 2010 World Cup semi-final.

Pakistan set them 191, had them (almost) dead and buried before Mike Hussey saved Australia with some outstanding six-hitting in the final over in one of the greatest comebacks ever seen in a World Cup. 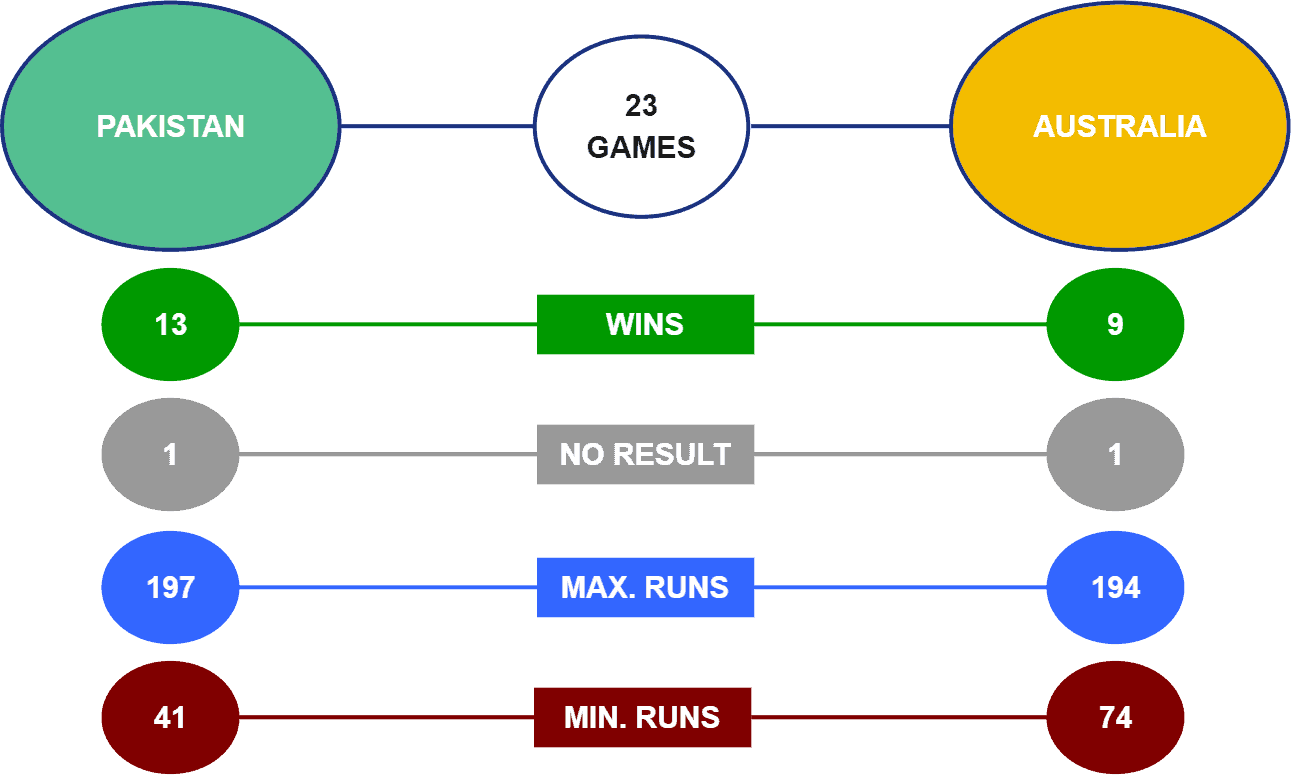 Let’s talk Pakistan vs Australia toss winner statistics. It really couldn’t be any tighter than this. But Pakistan have had the better of it this WC, so I’ll stick with Azam and hope he gets lucky again.

Time for the first of my Pakistan vs Australia betting tips! Look, I’m not going to say that Pakistan are a stand-out value at 1.79. If the toss goes against them, those odds aren’t going to look particularly great.

But given that the point of this section is to make a call on the match winner market, pre-toss, I’m going with Pakistan. Here’s why.

And as much as I’ve emphasised the importance of the toss, Pakistan look better suited, with better spinners, to defend if the toss goes against them.

Now, for the second of my Pakistan vs Australia betting tips. Adam Zampa has been Australia’s top wicket-taker by some margin. He has 11 wickets, with Josh Hazlewood next on eight and Mitchell Starc on seven. Pat Cummins only has four.

Crucially, Zampa has done his best work in Dubai.

Not only did he take 5/19 against Bangladesh but he also took three wickets across the other two games he’s played here in Dubai.

So he obviously likes it here and should be their main threat at good odds.