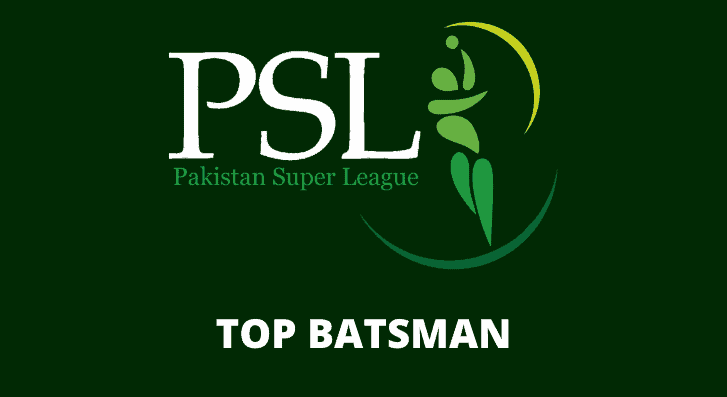 The 2022 Pakistan Super League is moving into view, and the hype is increasing. The action gets underway on Thursday 27th January as the defending champions, the Multan Sultans, take on the favourites Karachi Kings at the National Stadium in Karachi.

To prepare for the tournament, I am putting together some PSL betting tips – starting with the top batsman in the PSL 2022.

Whether you agree with what I have to say or want to go with your own online cricket betting picks, you should check out our recommended betting sites below. These sites have some of the best odds in the industry on this tournament – you can sign up within a matter of clicks!

First – the snapshot! Three standout batters are leading the charge at the top of the bookmakers’ reckoning for the PSL top batsman market – and they are familiar names!

Here are the current market leaders:

Why is each batter considered a possibility for the top batter mantle? What marks them ahead of their contemporaries? Let’s break down each of the front-runners.

The Pakistani run machine is eyeing his third straight top batsman crown in this competition – and the bookmakers think he is the most likely to achieve what would be a quite astonishing and dominating personal statistic.

His abilities are reflected in the ICC World Twenty20 batsman rankings – he is joint-top with England’s Dawid Malan.

The Karachi Kings skipper is one of the main reasons his side are the favourites for the PSL.

The Robin to Babar’s Batman, Mohammad Rizwan helps complete one of the most fearsome top orders in world Twenty20 cricket for Pakistan.

His form for his country in the back-end of 2021 was astounding – registering scores of 39, 40, 78, 38, and 87 in his last five Twenty20 international matches. His purple patch for Pakistan is even more remarkable when you consider his international career only got back up and running in 2019 after a two-year stint in the international wilderness. His bounce-back ability adds to the robust character and championship mentality he undoubtedly boasts.

Last season in the PSL, Rizwan scored 444 runs across nine innings at an average of 55.50 – he was one of the chief reasons the Multan Sultans managed to land the PSL title for the first time.

It will be fascinating to see if Azam or Rizwan will top the PSL run-scoring charts.

Alex Hales comes into this game off the back of an encouraging stint for the Sydney Thunder in the Big Bash League – and forms the central prong to the Islamabad United batting fork.

The highlight of his BBL was a fluid and unbeaten 80 runs from 56 balls against the Hobart Hurricanes. Although he finished with a disappointing nine runs from nine balls in the BBL Play-Off, Hales can be happy with his work down under, hitting 383 runs in total.

The English powerhouse is a fearsome prospect for most bowling units in the world, and he has a proven pedigree in the PSL, averaging 34.75 across four innings for Islamabad United in a season that suffered mass disruption from Covid-19.

If Islamabad United are to go on a deep run, Alex Hales will need to fire on all cylinders!

We know all about the obvious names, but the most interest reserves itself for the longer odds – it has been that way since the beginning of time.

We have picked a couple of names for you that might pique your interest at a good price:

Find out why we think they could be good value bets by reading below.

A legendary name in Pakistan cricketing circles, Mohammad Hafeez remains an essential figure for the Lahore Qalandars at 41.

He is a wily hand with the ball – but it’s his batting that may help last season’s fifth-place team launch a surprise title challenge.

His experience is unrivalled in the modern game – he’s played 55 Tests, 218 ODIs, and 119 T20Is. His know-hbow could prove a crucial cog in the wheel of the Qalandars’ campaign.

The talented Englishman had a stellar BBL 11 with the Melbourne Stars – hitting five 50s in 13 innings – but it was disappointing from the franchise’s perspective.

He will be hoping for a more successful stint at the Karachi Kings, where he will be in the shadow of Babar Azam. However, batting in the shadow of a Pakistani giant may help to take the pressure off, and at 17.0, he could be worth a nibble to top score in the tournament.

There are too many names to mention for the top batsman mantle, but a few do need mentioning.

Jason Roy is back to full fitness and will come into the PSL fresh from a run out for England in the Twenty20 international series against the West Indies. His lack of maximum game time means he is 19.0 to finish top scorer – but he can catch up double-quick time – particularly on flat, sub-continental pitches.

You cannot ignore Fakhar Zaman either – a key cog to the explosive Pakistan batting line-up who lit up the Twenty20 World Cup semi-final with a phenomenal unbeaten 55 in his side’s defeat to Australia. You can back him at 11.0 to bag the runs for the Lahore Qalandars.

Other names to keep an eye on include Sharjeel Khan, Shoaib Malik, and Umar Akmal – all available art 17.0.