After the very best and also very free T20 World Cup betting tips for the South Africa v Sri Lanka game? Good, this is the place for them and we’ll also give you the lowdown on the two teams, some cool stats and analysis of how they’ve fared against each other in the past.

This is yet another important game at the T20 World Cup, where South Africa will feel a win here could give them every chance of making the semis. And if you’re looking for the best cricket betting odds for the game, keep reading!

Today’s South Africa v Sri Lanka betting odds have South Africa as quite strong favourites ahead of this one. I’ll explain why that’s more than justified, giving you all the reasons why the Proteas are stronger in all departments.

There are also cricket betting tips on the toss winner and I’ve picked a Sri Lankan batsman at big odds to be his team’s top batsman, a tip that’s especially for our Indian readers.

There was a big surprise ahead of their win over the Windies when Quinton de Kock was absent for ‘personal reasons’. We quickly found out that those reasons were that he had opted against ‘taking a knee’ and ruled himself out.

QDK has since apologised, clarified the reasons behind his original decision, apologised and is back in contention. This isn’t the time or place to discuss the whole incident other than to say South Africa are a far better slide with him in it and will be glad that they’ve sorted out the issue eventually.

That’s because on paper he’s their best batsman. But their best batsman so far this World Cup has been Aiden Markram. His 40 against Australia wasn’t enough to win them that game but his 51 not out against the West Indies certainly was.

Add his useful off-spin to the equation, that’s economical rather than wicket-taking, and he may just be their most important player right now.

Without de Kock they beat the Windies to get back on track and give themselves a chance after another fine bowling performance, where only Tabraiz Shamsi was expensive.

Anrich Nortje was man of the match despite only taking one wicket. The reason? He only went for 14 runs off four overs.

De Kock should play here at the expense of Reezan Hendricks.

Sri Lanka will have felt they were in the game at the halfway mark against Australia after posting 154. But David Warner and Aaron Finch put an end to that with some big hitting in the Power Plays and never looked back.

It’s going to be really hard for Sri Lanka to qualify from this position with England all but assured of a Top 2 finish and Australia going well, while a loss to SA would mean the Proteas will fancy their own chances.

But whatever happens in this tournament, the Lankans have had some good performers so far.

Wanindu Hasaranga da Silva has eight wickets in six games and has been extremely economical in all of them. He also hit a 71 with the bat in a qualifying match against Ireland.

Middle-order batter Bhanuka Rajapaska has been impressive as well, scoring 53 and 33 not out in his last two games.

Charith Salanka has been very good, as well. He got 80 not out in that excellent win over Bangladesh and 35 against Australia. So at least they have some decent players for the future.

Avishka Fernando has been disappointing so they might recall the experienced Dinesh Chandimal.

A par score at Sharjah looks to be about 150, which is just short of what the Windies managed against Bangladesh. Get to that and you have a good chance of defending it because despite some short boundaries that batsmen can target, the pitch is low, slow and two-paced at times.

But if chasing teams can bat sensibly and not lose early wickets, 150 is just about chaseable. South Africa are a good bowling unit and if they field first, it could pay to go under 140 innings runs for Sri Lanka on Live Betting.

Here’s our full guide of Sharjah if you’re looking to find out more about betting statistics at this venue.

Things have not been very close between these two. South Africa are 11-5 up,which is somewhat surprising because SA don’t see this as one of their better formats while Sri Lanka are not only former WC winners but the side with the best winning percentage in the T20 WC of anyone.

Mind you, the Proteas have played Sri Lanka three times in World Cups and beaten them in two of them so maybe SA just know what it takes to beat them.

To make matters worse for the Lankans, SA beat them 3-0 recently. In Sri Lanka. 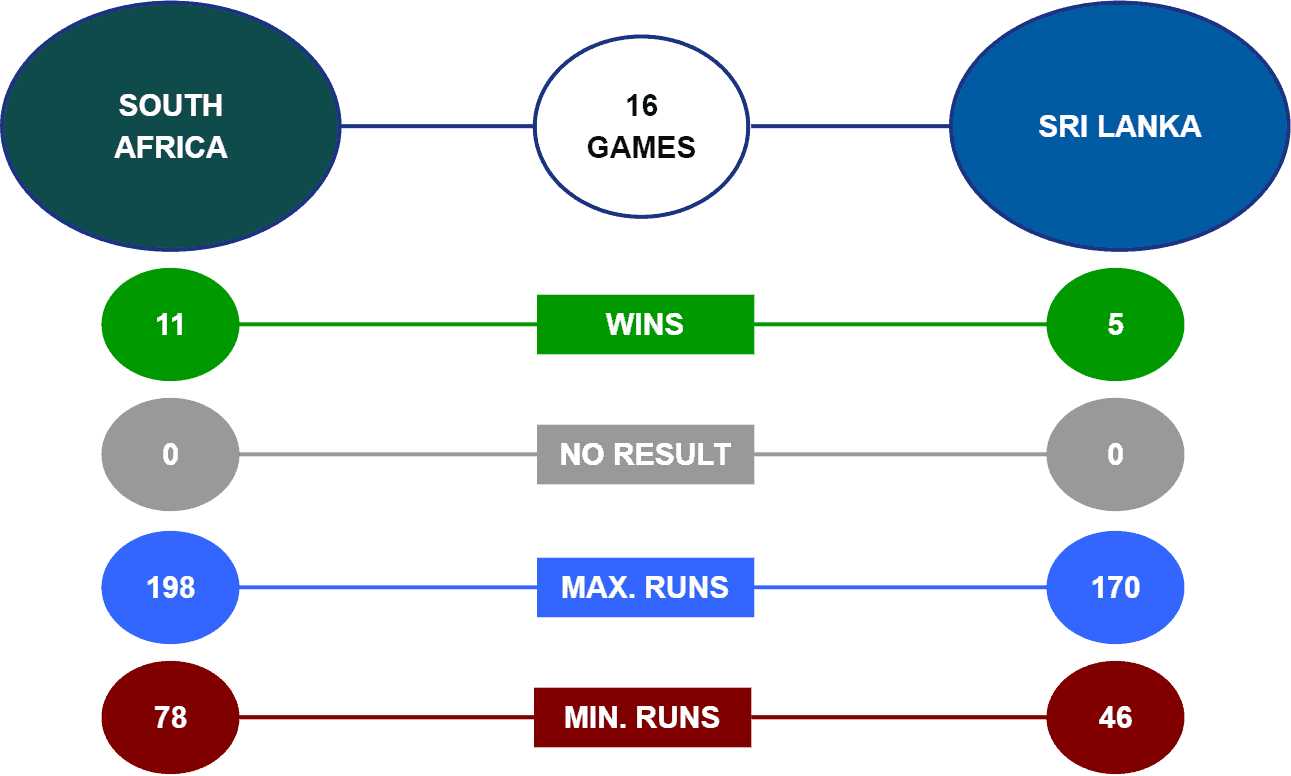 Time to look at some South Africa v Sri Lanka toss winner statistics. SA are 9-7 up in those games and that’s probably part of the reason why they have won so many of them .

Stick with South Africa to win the toss in this game.

Time for our match prediction. South Africa are strong favourites and that’s understandable.

Sri Lanka have won four games out of five this tournament but three of those were in qualifying. The other one was against Bangladesh, who haven’t been great this tournament. When they played a far better side in Australia, they lost convincingly.

SA were on the wrong end of the toss against the Aussies and still fought back extremely well with the ball to almost win that game anyway. Add that very strong record in the head-to-head to the equation and you can see why the Proteas should win one way, or another.

They’d rather restrict Sri Lanka to about 135-140 and chase that, which is pretty much what they did against the Windies. But 160 batting first should be more than enough and even 145 should be defendable with their excellent bowling resources.

The return of de Kock with a point to prove is another plus point so SA really are holding all the trump cards.

And here’s our Betway review, by the way.

It’s very possible that the likes of Nortje and Rabada blow away Sri Lank’s top order and that it’s one of the middle-order batsmen having to do the bulk of the work.

That could open the door to that man Rajapaska.

He ended two runs short on 33 of Kusal Perera and Charith Kasalanka, who both got 35, in that game against the Aussies.

And his 53 against Bangladesh was only topped by Asalanka’s 80 in the one before that.

But sooner or later 40 or 50 could be enough and at odds of 9.5 he’s certainly worth chancing.