South Africa and West Indies will look to pick up a win in the T20 World Cup Group 1 as the two sides take the field this week.

As part of our online cricket betting analysis, find the best South Africa vs West Indies betting tips and predictions below.

Both teams are off to a disappointing start in the group – South Africa fell to Australia while West Indies incurred one of their biggest defeats in T20 cricket against England.

Between the two, the Proteas are still looking comparatively better and that’s the side we’re going to back in our South Africa vs West Indies predictions and betting tips.

South Africa are heading into this match after losing to Australia in their opening Super 12 fixture. Batting first, the Proteas could rack up just 118-9 after most of their batsmen succumbed to Australia’s bowlers and possibly, the nerves.

Aiden Markram scored the most runs that afternoon with 40 while the likes of Quinton de Kock, Rassie van der Dussen, and Temba Bavuma went for cheap wickets.

With the ball, South Africa tried their best but the pitch in Abu Dhabi was supportive enough for the Aussies to deal some damage. They chased down the target with 121-5, winning the match by 5 wickets.

Anrich Nortje and Keshav Maharaj took three wickets between them while Tabraiz Shamsi and Kagiso Rabada got a wicket each. On the whole, the Proteas weren’t all that bad – they did manage to sweat the Aussies and got crucial wickets to turn the tide. However, Marcus Stoinis and Matthew Wade saw to the win in the final overs.

Had South Africa batted well and added more runs on the board, the game could have very well gone their way. Currently, they are placed fourth in Group 1.

They also have a fair bit of momentum on their side, having beaten Afghanistan and Pakistan in the warm-up games with convincing margins. The only problem for them at the moment would be the misfiring in their batting order – De Kock and Van der Dussen need to start clicking and rediscover their groove in the main rounds.

Defending champions West Indies are in a world of trouble. They lost both their warm-up games to Afghanistan and Pakistan – posting just 130+ runs in both their innings.

On this lack of form and momentum, they played England and were bowled all out for a measly 55. Except for Chris Gayle, who scored 13 runs in as many balls, all other players departed in single digits.

They managed to get four wickets of England but that was not enough – the Poms won the match by 6 wickets with 70 balls to spare.

West Indies have been pegged as one of the favourites to go the distance in this year’s men’s T20 World Cup, but so far they have failed to match the competition, let alone impress.

The team is fielding a pretty capable squad, full of experienced stars and T20 specialists – they are just not clicking at the moment. They have been outclassed by all their opponents so far and if things remain the same, they are likely to finish bottom in their group – that’s where they are right now with a net run rate of -3.970.

We are in Dubai for this one where the Caribbeans were handed that humiliating loss against England just days ago. The pitch is primed for batting, as seen in the Indian Premier League and that entertaining match between India and Pakistan.

This being a day affair, dew will have very little role to play.

Check out our Dubai Stadium betting guide for more on this venue!

Between South Africa vs West Indies, it is the Proteas who lead in the head to head tally with 9-6.

They also won the five-match series in June-July with 3-2 in Grenada. All in all, South Africa have the psychological advantage over their Caribbean counterparts. 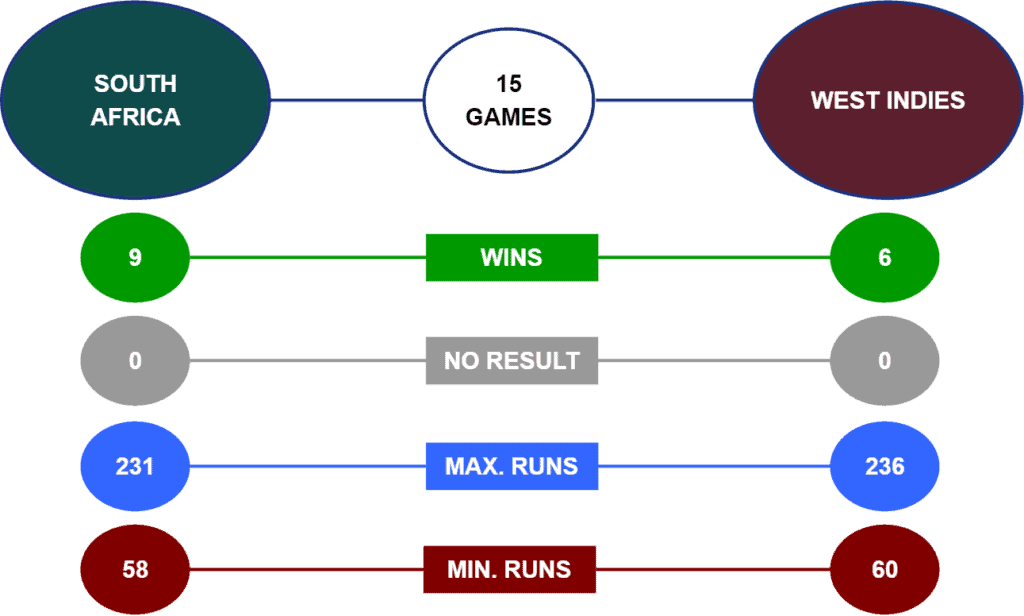 In the coin toss department, things have gone the way of the West Indies team. They have won the toss 10 of the 15 times.

Let’s back the Proteas to shift those numbers in their favour in our South Africa vs West Indies toss prediction.

Going by how West Indies have been playing in the UAE this season, it doesn’t seem like they will be able to defend their title. Of course, these are still early days but they haven’t particularly inspired confidence thus far.

As for South Africa, they are in excellent form with series wins over West Indies, Ireland, and Sri Lanka ahead of the World Cup. Then, they go unbeaten in the warm-ups but lose to Australia though, in their defence, it may have been a case of nerves.

On the whole, they have been far more consistent in their performance. Let’s back them to win the match.

Granted that Quinton de Kock is yet to explode in the World Cup this year but sooner or later, he is bound to find his groove.

Perhaps, the fact that he has scored 302 runs against West Indies in T20 cricket – the highest by any South African – will serve as motivation for him to deliver. He scored 255 of those in his most recent tour of the Caribbean. As a top-order batsman, he has plenty of time to set the tone for the inning.

Let’s round things off with some quick stats ahead of the South Africa-West Indies game.