There was a brief respite for the Renegades from their horrific form at the beginning of January, putting together back-to-back wins for the first time in BBL 11. It’s proven a false dawn, though – Nic Maddinson’s team gave another dreadful showing last time out, losing by 129 runs to the Sydney Thunder.

They face a Sydney Sixers side smarting from defeat against the Scorchers and one that is desperate to defend their crown.

The form will not be reversed here – I am backing the Sixers to comfortably win against an out-of-sorts Renegades team that continue to underachieve. For more Melbourne Renegades vs Sydney Sixers betting tips, continue reading my preview below.

I check out the live cricket satta rates and other need-to-know facets ahead of the tie, which takes place at 13:45 IST on Tuesday 11th January at the GMHBA Stadium, Geelong.

The Sixers are strong favourites for this, meaning you won’t get the best value to back them for the win!

You can throw this season in the “should do much better” section of the Renegades’ report card.

Despite some woeful performances throughout the campaign, the Renegades are somehow avoiding the wooden-spoon placing – solely by virtue of Covid-19 outbreaks among rivals.

Even the back-to-back wins were against severely hampered opponents – their victory over the Brisbane Heat, for example, can be chalked down to the lack of first-team personnel the Heat could put out on the field.

Their 129-run defeat to the Thunder on Saturday marked a new low moment in this campaign, and I struggle to see how they can bounce back.

In further bad news to the Renegades’ eliminator prospects, bowlers James Pattinson and Mohammad Nabi miss out. The former is managing his body after recent demands, while Afghani player Nabi is returning home for personal reasons.

There is a glimmer of good news on the horizon – leg-spinner Cameron Boyce, who suffered a calf injury a day before the season began, is fit to play and returns to the squad.

James Seymour misses out on the 13-man squad to make way for the returning Boyce.

It will take something special to turn the Renegades’ season around, but the returning Boyce could provide the filip they need!

He was out of action for the entirety of last year’s campaign, but played a key role the season before, and caught the eye by taking four wickets for 15 runs from four overs in the Renegades’ demolition of the Heat.

Can a fresh face perform the miracles the Renegades need to exit their run of poor form?

Weather and Covid-19 has definitely played a part in tempering the Sixers, who started the campaign like a steam train.

Suddenly, after Sunday’s defeat to the Scorchers, the Sixers are battling to avoid a third straight defeat – a feat recently unheard of for last year’s BBL winners.

Since scoring 213/4 in the opening game of the campaign, they have struggled to carry their bat with any great authority – making more than 160 just twice in the preceding six matches.

Fortunately for the defending champions, they face this opponent at just the right time to get their tournament back on track.

Spinner Stephen O’Keefe remains on the sidelines after suffering a right-hand injury against the Scorchers two games ago.

On the Sixers’ Twitter takeover against the Scorchers, captain Moises Henriques revealed he was in self-isolation and looks set to miss this one.

Other than Henriques and O’Keefe, the Sixers have a clean bill of health and have named a strong squad of 17.

It was an important, if patient, knock of 26 not out against the Scorchers – though he couldn’t apply the pressure he would have liked to push the Sixers up past their score of 155/4.

There is just a feeling that Silk is on the edge of compiling one of his explosively exciting innings that only he can!

It’s the second game of the day at the GMHBA Stadium after the Renegades vs Sixers clash earlier in the day.

The weather looks mainly sunny, with some cloud cover potentially offering some assistance with the ball.

The Sixers almost have a 2-to-1 head-to-head advantage over the Renegades, with nine wins to the Renegades’ five.

The Sixers are also unbeaten in four against these opponents – and I can see them making it five in a row. 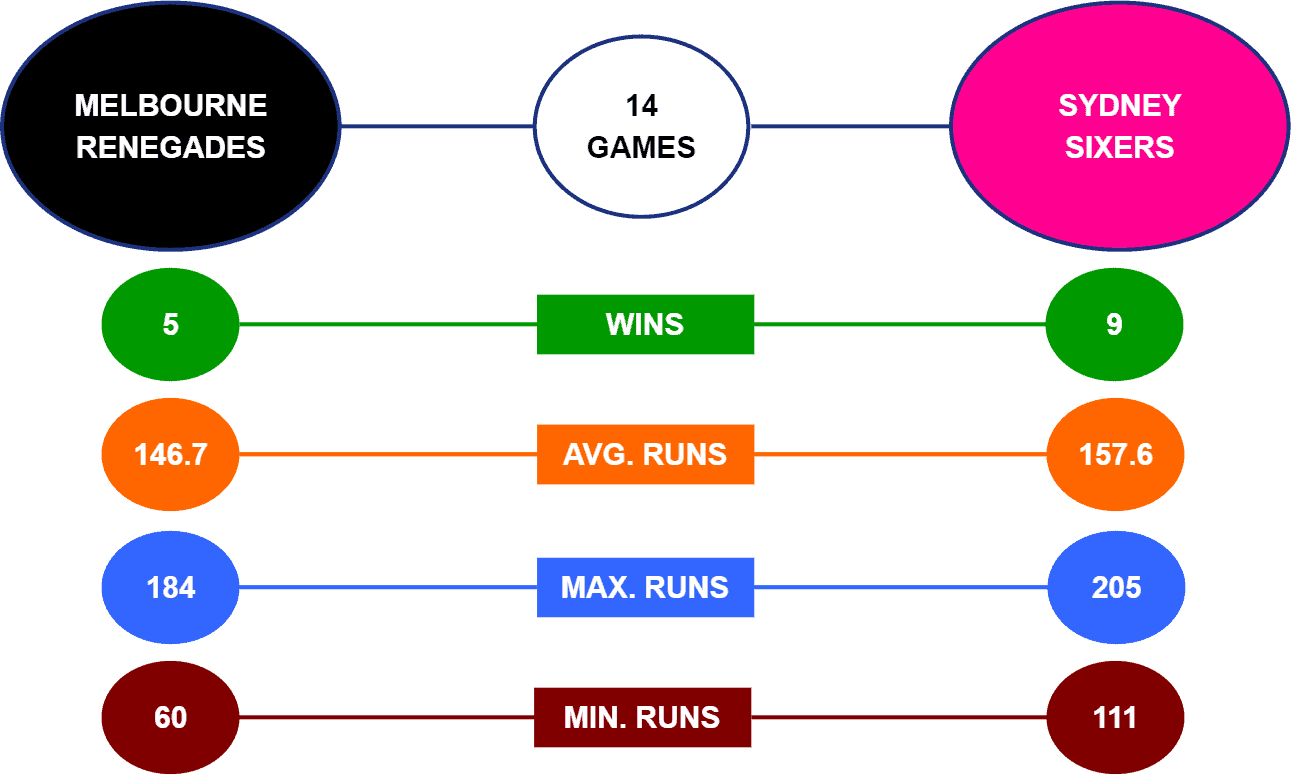 The Sixers’ head-to-head record is all the more impressive given the number of times they have lost the toss! In 15 bat flips, the Renegades have won ten of them.

I think the favourites will close the gap by guessing correctly at the bat-flip this time around.

You can find the Renegades vs Sixers toss winner statistics below:

Recommended Bet: Back the Sixers to win @ 1.64  with Pure Win

The Sixers are hardly juicy odds to get the win here – but there’s just enough meat on the bones to make it worth a responsible pre-match punt.

They are the defending champions, have been infinitely better than the Renegades throughout this campaign, and will want to prove a point after two defeats in a row.

If you’re after a bigger price, check out my hot bet! I’m taking the pre-match Sixers punt with Pure Win – they are my go-to bookie for all pre-match fancies. Find out more by checking out our Pure Win review!

Recommended Bet: Back Dan Christian to be Man Of The Match at 11..00 with Betway

Another game in which Dan Christian top-scored for the Sixers – he’s beginning to make a habit of it!

I’m of the opinion his bowling game is his best asset – which is why I think with the form he’s in with the bat and his ability to take wickets at crucial periods make him a decent bet to be Man of the Match.

You can back him at 11.0 with Betway – that’s a sizable price for a man that’s hit 111 runs and taken two wickets in his last two games.