It’s the North London derby this weekend as Arsenal prepare to host Tottenham Hotspur in the English Premier League.

Both sides are heading into this fixture on the back of rather disappointing performances in the Premier League this season.

Spurs have been comparatively better but only by a small margin; Arsenal, on the other hand, are blessed with a full squad at their disposal and are showing signs of improvement following a dismal start.

The Gunners have the home advantage and history on their side when it comes to this particular fixture. For that reason, I’m backing a win for Arsenal here.

Arsenal have won their last three competitive fixtures in a row, signalling what is possibly the start of a turnaround in their form.

Mikel Arteta’s men most recently defeated AFC Wimbledon in the League Cup by 3-0 in the midweek to continue building the momentum and confidence. This win was preceded by back to back victories in the EPL against Norwich City and Burnley, both by 1-0. Martin Odegaard converted a beautiful freekick against the Clarets at the Turf Moor while Pierre-Emerick Aubameyang scored the sole goal against Norwich.

These results also mean that Arsenal have kept a clean sheet in their last three, thanks to the presence of first-choice defenders in the team. But the fact that they sit at 14th place in the table still means they have their work cut out for them.

The forwards will have to bear a huge part of this responsibility on their shoulders, seeing that they have scored only two goals in the five league matches so far. To elaborate on this a bit more, Arsenal took 30 shots in total against Norwich but managed to convert only one; the same against Burnley was 18.

That said, the hosts have a near-flawless track record against Spurs at the Emirates Stadium, and have scored a goal against them in every home clash in the last couple of decades. Combined with the poor showing by Tottenham, Arteta will fancy his chances of walking away with the whole three points.

As for player availability, all first-choice players are available for this fixture.

Tottenham Hotspur are also heading into this game after a League Cup win over Wolverhampton Wanderers although, it came through penalties after a full-time score of 2-2. Spurs had a two-goal lead in that match which was squandered in the second half – an outcome that eventually led to a slogfest culminating in spot-kicks.

Nonetheless, there is reason to celebrate for Spurs’ fans – Harry Kane got this first goal of the domestic season and will now look to open the tally in the EPL as well.

As for their run in the Premier League, the visitors were cruising high – just when Arsenal were sailing low – but in a karmic reversal of fortunes, the tables have turned.

After keeping clean sheets in their opening three victories, Spurs were humbled in London Derbies by Crystal Palace and Chelsea, losing by 3-0 on both occasions. These recent losses have pummeled Tottenham to the seventh position. And just like Arsenal, their goal count is also low with just three of them – by far the lowest in the top half of the table.

But for the Sunday clash, Nuno Espirito Santo will look to move those numbers in his favour, especially with the availability of Lucas Moura. Son Heung-Min is also fit while Harry Kane is starting to rediscover his form. In all fairness, the Spurs have a decent chance of getting the win here.

This is a rivalry spanning across more than 100 years. In the 203 times the two sides have met, Arsenal have emerged victories a majority of the times with 83-66, with 54 matches ending in a draw. 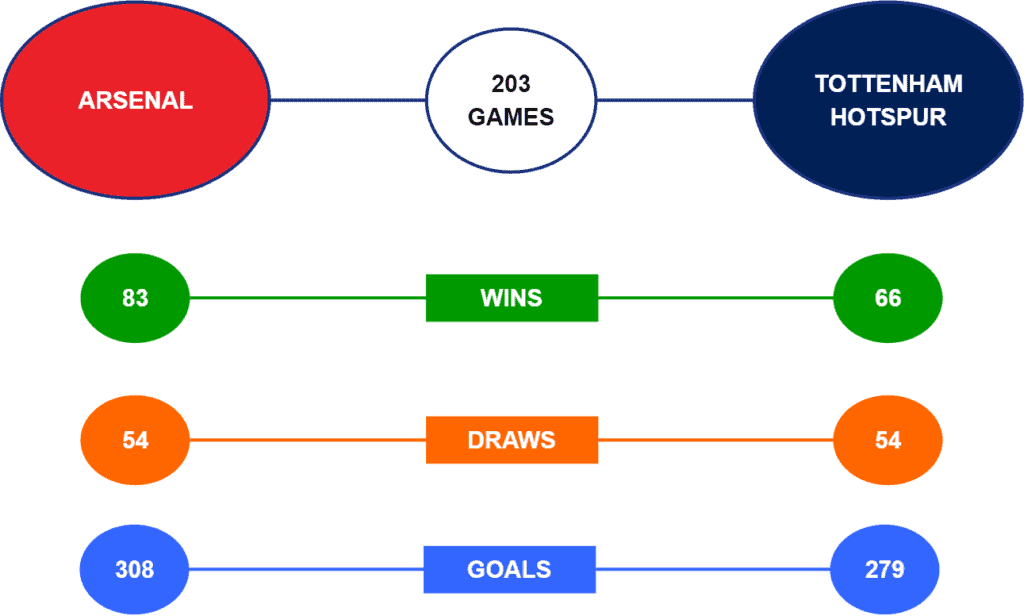 Recommended Bet: Back Arsenal to win @ 2.23 with Casumo

Arsenal’s form has undergone a significant improvement since the opening days of the English Premier League. They have improved defensively and are also starting to click in the attack.

It has been an entirely opposite story for Spurs although, they will look at Kane and Seung-Min to deliver a turnaround at the Emirates on Sunday.

However, Arsenal have a massive edge against their North London rivals at home and I don’t expect it to change in this fixture. In other words, Arsenal have a much higher chance of winning this clash.

Also, read our Casumo review to find out why we recommend betting on the Premier League here!

Martin Odegaard to be anytime goalscorer

Recommended Bet: Odegaard to be anytime goalscorer @ 6.25 with Casumo

Odegaard scored the winner against Burnley last weekend and is clearly bubbling with confidence at the moment. He also scored against the Spurs last season at the Emirates to quickly leave his mark with the team.

The former Real Madrid man is available at an excellent price and given his importance in the team, he is likely to feature for a good portion of the match – thus giving him enough time to find a goal.

Neither side have been particularly great at finding goals this season but we can expect it to change on Sunday. North London Derbies have been always entertaining – especially this one – with many goals in the offing.

Expect over 2.5 goals in the match with both teams to score.