Australia will seek to cement their semifinal chances in the T20 World Cup when they take on the eliminated Bangladesh in Group 1. The match will take place at the Dubai International Cricket Stadium, Dubai on Thursday, November 4, at 3:30 pm IST (2:00 pm local time).

Get the best rates from the online cricket satta bazar as well as the best Australia vs Bangladesh betting tips and predictions below.

Let’s move on to the predictions for the latest cricket games ahead of this T20 World Cup game.

Bangladesh have lost all four of their Super 12 fixtures and as a result, are out of the competition. Australia, on the other hand, are hanging by a thread. With two more games to go, they are in a do-or-die situation to reach the semifinal.

The Aussies will start as the favourites here on account of a comparatively superior squad and overall form. Let’s back them in our Australia vs Bangladesh betting tips & predictions.

Australia, right now, are in a rather precarious situation to secure a top-two finish in Group 1. Currently placed third with four points and two games in hand, they are trailing South Africa and the table leaders England.

The equation for them is as follows: they need to win both their matches and hope England beat South Africa. Because if the Proteas manage to win, Australia will need to deliver massive wins to improve their net run rate (currently at -0.627) and qualify on that basis.

Aaron Finch and co. started their Super 12 campaign with back to back wins over South Africa and Sri Lanka, but fell to a hammering from England in the third game. Some may argue that it was the loss of the toss that proved to be their downfall as the Aussies batted first and managed just 125 runs in the first inning.

The in-form England team chased it down with ease, winning the match by eight wickets with 50 balls to spare.

Of course, when they take on Bangladesh, Australia will hope to tap into their recent wins and also avenge the 4-1 series loss they incurred to the Tigers right before the World Cup.

From a player point of view, there are no significant concerns here. Ashton Agar may be replaced by Mitchell Marsh but the rest of the playing XI should fill itself up.

With four losses in the last four Super 12 games, Bangladesh’s T20 World Cup campaign is over. They have just one game remaining and Mahmudullah’s men will play for pride and hope to take Australia down with them.

Their losses have come against Sri Lanka, England, the West Indies (it was a close game where the Tigers choked in the final moments of their innings) and most recently, South Africa.

The loss to the Proteas was their biggest one yet – Bangladesh were bowled out at just 84 runs with Liton Das and Mahedi Hasan scoring the most runs. In response, South Africa chased it down with 86-4 although, Taksin Ahmed put up a good bowling performance with 2-18 in his four-over spell.

But all things considered, it just hasn’t been Bangladesh’s tournament at all. And the loss of Shakib Al Hasan to injury hasn’t done well for their confidence either.

They are struggling, shaky, and are not clicking as a unit on all fronts. They will face a tough test against the Australians.

We are back in Dubai for this one where the pitch hasn’t entirely been as per the expectations.

Batting has been tricky and there is plenty of joy for bowlers all around. That said, batting second is the norm here as all the matches at this venue have been won in such situations.

Weather-wise, we are in for a clear sunny afternoon with no rain interruption. Australia recently chased down Sri Lanka’s 154-6 at this venue and will hope to keep that tempo going.

Check out our Dubai International Cricket Stadium betting guide for more on this venue!

In the head to head tally between Australia and Bangladesh, it is 5-4 to the Aussies. The four wins that Bangladesh have racked up came on their home turf in September in Dhaka. 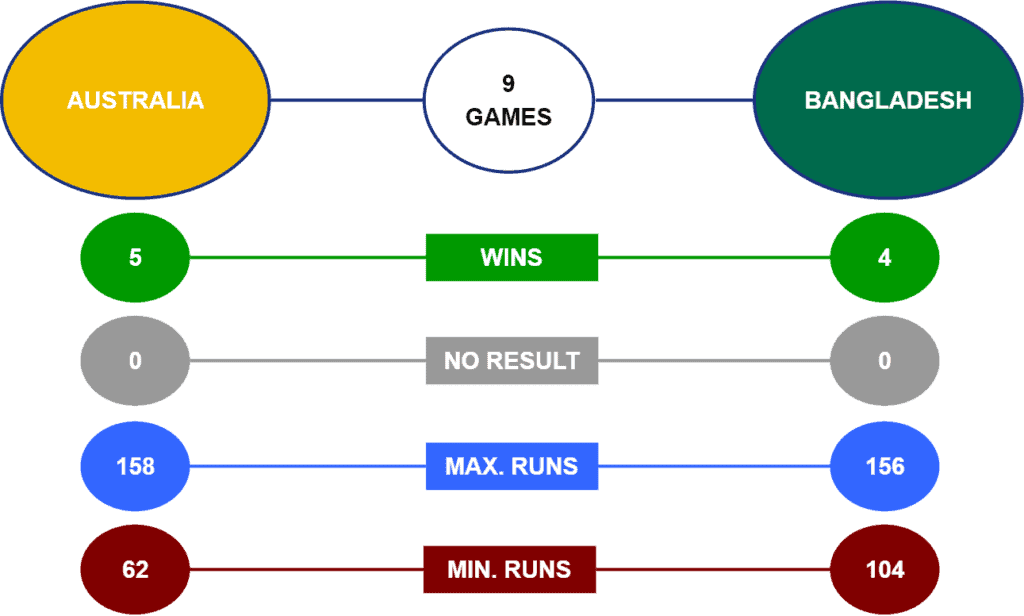 It is the same story in the coin toss department between Australia v Bangladesh, as the Aussies lead the Tigers by 5-4. Let’s back Bangladesh to get on even terms in this match.

Bangladesh are low on momentum, confidence, and form. They clearly hurting, especially with the loss of Al Hasan to injury. All that is left for them to do is play for pride and deal damage to Australia on the way out.

It’s a task that is easier said than done, of course. Australia have fared well in the T20 World Cup so far before running into a belligerent England. Given the form woes of their upcoming opponents, the Aussies will fancy a win for themselves here.

David Warner arrived for the World Cup with plenty of questions surrounding his form. But he picked up the slack with 14 runs against South Africa and 64 against Sri Lanka – both of which came in Dubai.

It may be safe to say that he is slowly getting back to his former self and will look to add some more runs under his belt when he takes on weary Bangladesh on Thursday.

Let’s round things off with some quick stats ahead of the Australia-Bangladesh game.