Roland Koeman’s FC Barcelona and Diego Simeone’s Atletico Madrid will face off in what will most likely decide the La Liga champions for the 2020-21 season on Saturday, May 8.

Just two points are what is separating Barcelona from becoming the league leaders again and getting their hands on the double. Meanwhile, Atletico Madrid are chasing their first La Liga trophy since the 2013-14 season.

The stakes are high and both teams are coming in this game off a similar run. All things considered, we are going to back Barca on this one owing to their better track record at home and of course, the Messi factor. 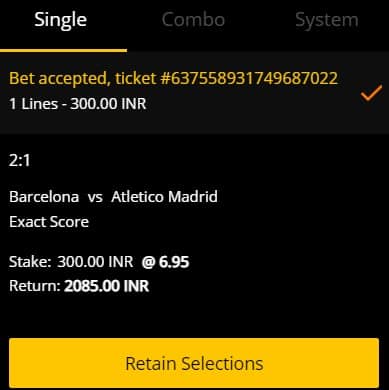 Want daily updates for other big matches of the day?

Last weekend, Los Rojiblancos beat Elche 1-0 to maintain their hold in the title race. The gap between them and the second-placed Real Madrid could have been much higher than two points, had it not been for a 2-1 loss to Athletico Bilbao the game before.

This means for them to win the title, Atleti would have to win the remainder of their games against Osasuna, Real Valladolid, Real Sociedad, and Barca.

That can prove to be a bit tricky, especially if their players start succumbing to pressure. Case in point, the boys have lost two of their last six matches in La Liga, with other defeat coming to Sevilla by 1-0. They were also held by Real Betis to a 1-1 draw.

While the likes of Llorente, Correa, and Carrasco have been driving the goal machine forward in the last few weeks, Simeone is hoping for Luis Suarez to find his stride again.

The former Barca man has been in brilliant form for Atletico but of late, he has been out of touch and also missed out on a few games due to muscle injury. He did start against Elche past weekend and he will be eager to visit his former club and put up a good show.

FC Barcelona are chasing their second trophy of the season after winning the Copa Del Rey a few weeks ago. Since then, things have gone pretty much according to the plan for the Catalans, except for a shock, 2-1 defeat to Granada.

A win in that game could have very well put them at the top of the table but not all is lost yet. However, as we head into the final stretch of the season, cracks are starting to appear in their defence.

They conceded two goals against Valencia last weekend and were rescued by Lionel Messi to win the match 3-2. In fact, they have conceded at least one goal in five of their last six games in all competitions, thus raising many questions about their defence.

Given the depth of Atletico’s attack at the moment, the defence will have to be a big concern here. We may see a four-man back in this game while in the attack, Griezmann and Messi should start with Dembele serving as a sub.

Overall, the two teams have met 44 times and Barcelona lead 24-9 in the head to head tally with the remaining 11 ending in a draw.

The Catalans have won just twice in their last six meetings with Atleti while in the last three, ATM have emerged victorious on two occasions. They even won the home leg of this fixture back in November by 1-0.

However, Simeone has never won at Camp Nou and will be looking to get his first win here.

Recommended Bet: Back Barca to win @ 1.83 with Casumo

As the La Liga title race heats up, Barcelona are beginning to come alive with Messi and Antoine Griezmann firing on all cylinders.

The Argentinean has scored 28 brilliant goals for Barca and will be keen on securing what could possibly be his last La Liga title. As for Griezmann, he has been doing a fantastic job of assisting his captain, scoring eight goals in his last nine games.

But this may be coming at the expense of their leaky defence; they have been conceding quite a bit and had it not been for Messi, the Catalans may not have been in the race. In other words, Barca are vulnerable.

Koeman will need to figure out his best defensive line-up, especially at a time when Atletico’s forwards are bustling with energy. This season, they have done well in the goals department scoring 61 of them – the highest in the last four seasons.

A bulk of those have come from the boots of Suarez (19) and Llorente (12). Plus, Suarez knows this pitch all too well and hopes will be high from him to deliver.

That said, Barca do have a big home advantage and will be keen on winning the title after what has been a truly demanding, emotional, and long campaign.

Antoine Griezmann to be Anytime Goalscorer

Recommended Bet: Back Griezmann to be anytime goalscorer @ 2.60 with Betway

Griezmann’s recent form is one of the big reasons why Barca are heading in this match with so much conviction. He has scored five goals in his last five and has also given a wonderful assist.

It is also the first time that he has scored goals in double digits (12) in Barca jersey in La Liga. The Frenchman is finding his form at the right time and his rise to the occasion is just what Barca needs to win the title.

He will most likely start against his former side and will have ample time to find a goal.

Both Teams to Score and Over 2.5 Goals in the Match

Barca’s defence isn’t the strongest right now while Atletico Madrid too, have conceded a goal or two in their last few games. There is ample attacking talent in the two sides, many of whom have been in a fine scoring form in the past few weeks.

Both sides will be looking to make a big statement in this match, leaving us to expect a goal-scoring affair.