The much-awaited Champions League is finally back with Barcelona set to welcome Bayern Munich at Camp Nou in this exciting Group E clash.

Both sides have had a good start to their respective domestic campaigns.

Barcelona, however, are expected to start as the underdogs despite playing at home – the simple reason being that the Catalans are going through what can only be described as a ‘transition phase.’ Add to this equation their last hammering against Bayern and an injury-depleted squad, the picture becomes all the more clearer.

I’m going to back a win for Bayern Munich here.

La Blaugrana have picked up seven points from the three La Liga matches as Ronald Koeman continues to lead the team through this critical juncture.

With their weekend match against Sevilla postponed owing to the late arrival of South American players, Barcelona will be playing Bayern Munich in their first match since the international break. Clearly, the hosts will look to make the most of this additional prep time and get their ducks in a row.

Before the break, Barca beat Getafe 2-1 and drew Athletic Bilbao 1-1.

All things considered, this will be a tricky encounter for the Catalans to navigate. Not only the wounds are still fresh from that 8-2 whitewash at Nou Camp in the 2019-20 season, but the departure of Lionel Messi to PSG and the return of Antoine Griezmann to Atletico Madrid do not make things any easy.

This means Phillippe Coutinho may start in the front three – his first appearance for Barcelona this season – alongside Memphis Depay and the new signing Luuk de Jong.

Bayern Munich failed to defend their title among Europe’s elite last season after falling to PSG in the quarterfinal but this time around, Julian Nagelsmann looks determined to make amends.

Since taking over the Bavarian side this July, he has won the German Super Cup against Borussia Dortmund and defeated Bremer SV 12-0 in the DFB Pokal Cup, hinting at just how the Reds intend to do business this season.

Bayern Munich have been just as imperious in the Bundesliga, picking up three wins and a draw in the four played so far. Over the weekend, they warned Barcelona of what’s in store for them when they routed RB Leipzig at the Red Bull Arena by 4-1. Robert Lewandowski scored the opener, followed by Leroy Sane and Jamal Musiala.

The visitors are enjoying a full depth of the squad with Kinglsey Coman and Corentin Tolisso set to be the only absentees. All key players remain available – in essence, Bayern are firing on all cylinders and will look to start on a strong, positive note on Tuesday in the Champions League.

Bayern Munich have enjoyed this fixture a lot more than Barcelona as they lead 7-2 in the 11 played.

This will be their first meeting since that 8-2 defeat for Barcelona at the same place in the Champions League 2019/20 quarterfinal. 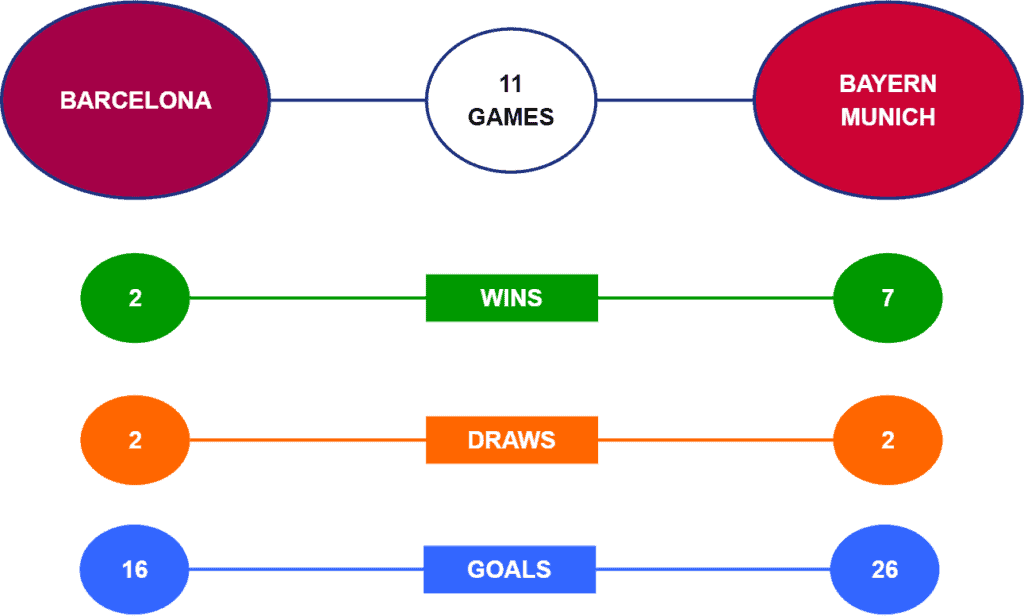 Recommended Bet: Back Bayern Munich to win @ 1.94 with 10CRIC

No matter how we look at it, Barcelona may be staring at a defeat or if they push hard, a draw. But a win for them against the mighty Germans is too tall of an order to deliver – despite playing at home.

Bayern Munich have hardly got any flaws in their present squad while for the Catalans, it is a long list that starts with a depleted attacking lineup.

Moreover, the Bavarian forwards are roaring with confidence and having scored a litany of goals in their last few games, they will be a handful for any defender to face, let alone Barcelona’s. All signs point to an inevitable win for the visiting side.

Robert Lewandowski to be anytime goalscorer

Recommended Bet: Lewandowski to be anytime goalscorer @ 1.50 with Betway

Lewandowski has time and again proven his mettle for Bayern Munich. More than that, he has established himself as one of the most prolific forwards to play for the club in quite some time.

The Polish forward has scored at least one goal in seven of his last eight matches – three in the international break for Poland in the World Cup qualifiers and eight for Bayern Munich in German competitions. He is in form and looks quite likely to keep the same rhythm going.

Both sides have seen over 2.5 goals in their last couple of matches – given the attacking prowess of the two (especially Munich’s), it is hard to imagine this translating into a low-goalscoring affair.