The Heat may only be playing for pride, but a poor run of results for the Sydney Sixers mean this is an important game for their hopes of finishing second in the standings.

We are looking at two teams at polar opposite ends of the form spectrum here – and I am going to stick with the trends for this clash!

I’m backing the Sixers to win as part of my Brisbane Heat vs Sydney Sixers betting tips. I have been looking at the online cricket satta bazar and other need-to-know pre-match facts and figures ahead of the game, which kicks off at 7.35 am (IST) on Wednesday 19th January at the Gabba.

Today’s cricket betting tips is a win for the Sixers at a skinny price – but look at my Hot Bet for much bigger odds.

It’s as bad as it gets for the Brisbane Heat – they are on a woeful winless run that stretches back to New Year’s Day.

In Twenty20 cricket, you can sometimes attribute bad results to misfortune or a close-run defeat that didn’t fall for them.

There are no excuses for the Heat, though. In each of their last five matches, they have suffered the following defeat margins – five wickets, eight wickets, 71 runs, eight wickets, and six wickets. Not once in those five matches have they threatened to get even close to a positive result.

The batting unit just isn’t functioning to its full abilities – that’s why my main Brisbane Heat vs Sydney Sixersbetting tips revolve around a comfortable Sixers win.

It is a little too late for the Heat, but Ashes hero Marnus Labuschagne is back from international duty and available to play. They have missed the prolific number one test batsman in the world – though I do not think his addition will provide the magic formula.

The Ashes squad player was in fine form on return to the Heat line-up and was one of the few players to shine in his side’s six-wicket loss to the Perth Scorchers – taking two wickets for 19 runs from his four overs.

If he can replicate those sort of figures, he may be able to help his side’s faltering batting unit to stay in the game.

The Sixers are in a spot of bad form too – though it doesn’t compare to the Heat. After such a promising start to the campaign – losing just one of their opening seven matches – the Sixers find themselves getting drawn to the chasing pack.

A crushing defeat to the Adelaide Strikers mean they now sit level on points with Sydney Thunder, and only remain ahead by virtue of their superior Net Run Rate.

Despite the recent dip, the defending BBL champions still look a formidable unit. There is great balance to their batting and bowling attacks – and I fully expect them to overpower the Heat.

Like Labuschagne, Australian spinner Nathan Lyon has made himself available for his franchise, but unlike Labuschagne, his availability comes at a crucial point in the season where his canniness and experience could pay dividends in their pursuit of another BBL crown.

Jordan Silk returns from injury, as does Nei Lawrence-Smith, who is yet to make an appearance for the club.

Nick Winter drops out to accommodate the returning Lyon.

The modern-day cricketer plays so many formats in cricket that the spectre of jumping from the longest version of the game to the shortest one isn’t something that phases them.

Still, it will be fascinating to see how Lyon – so dominant in the Ashes series – will deal with the likes of Chris Lynn, if the experienced opener manages to turn his personal form around.

I can see Lyon bagging a few wickets – I will be keeping an eye on his progress throughout the game.

The Gabba has not been a happy hunting ground of late for the Brisbane Heat – they lost their last two games there, scoring just 234 runs across both innings. The Sixers will fancy their chances of cooling the Heat on their own ground!

There are some thunderstorms about Brisbane on Wednesday – let’s hope we get a full day’s play in!

There aren’t too many more dominant head-to-head records in the Big Bash League than the Sixers over the Heat! Of the 15 ties these two have contested, the Sixers have won 12 of them – that’s a win rate of 80%.

A win for the visitors here will make it a third straight one over the Heat. 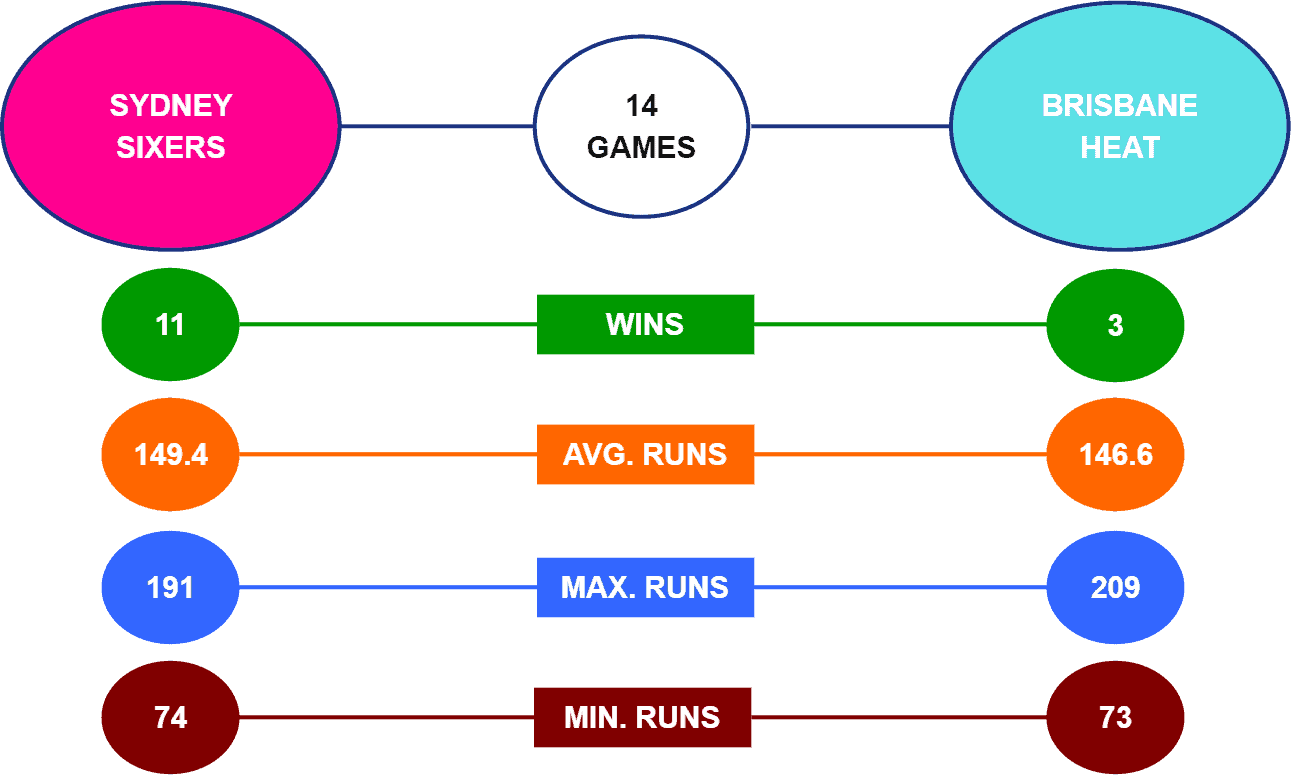 The head-to-head domination could be explained, in part, by the Sixers’ record at the bat-flip – in nine of the 15 matches, the Sixers have had the privilege of deciding whether to bat or bowl first.

Everything is going against the Heat right now – that’s why I’m backing a Sixers win!

You can find the Heat vs Sixers toss winner statistics below:

Recommended Bet: Back the Sixers to win @ 1.52 with Pure Win

The comeback of Marnus Labuschagne is all too late for the Heat – and I don’t think it will have the require impact here either.

Despite his status as the number one test batsman in the world, he alone won’t be enough to paper over the cracks in a batting roster that has continuously failed to perform over the course of the season.

Nathan Lyon adds to what is already a fearsome Sixers bowling attack – and I think they will have far too much for the Heat.

As always, I will be placing my bet with Pure Win – they offer the best pre-match cricket betting odds on all Big Bash league events!

Read our review on Pure Win to find out more about my sports betting site of choice.

Hot Bet: Back Dan Christian to be top Sixers bolwer at 20.89 with 10CRIC

We had to rub our eyes too – this price is far too big for a player that has picked up seven wickets so far in this season’s BBL – including a memorable three wickets for eight runs from three overs in the Sixers win over the Strikers back on 21st December.

Personally, I think odds of 20.89 on a regular wicket taker to finish top bowler for their side is a steal, and I will be taking some of that price with 10CRIC – a leading online sports betting site with fantastic player special bets.