It is the London Derby in the English Premier League this week as Chelsea will play host to Arsenal on Wednesday evening.

Chelsea will look to secure their birth in the next year’s Champions League when they take on the Gunners. Thomas Tuchel’s men are at third place in the Premier League table with a six-point cover over the fifth-placed West Ham United.

Meanwhile, Arsenal will play for pride here having exited the Europa League semifinals after a bleak draw last Thursday. Their chances of playing in Europe next season are bleak as they face a long journey to fifth place.

The Blues are coming in this game on the back of a brilliant run overall while Mikel Arteta’s Arsenal are facing an identity crisis with poor results.

It is hard to imagine anything but a win here for Chelsea. 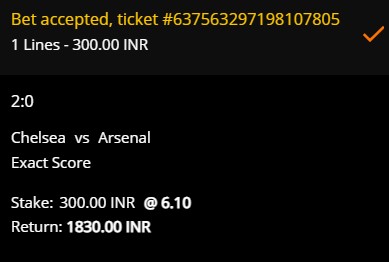 Want daily updates for other big matches of the day?

Chelsea are heading in this game after beating Pep Guardiola’s Manchester City by 2-1 in the Premier League last weekend, away from Stamford Bridge.

That rehearsal game for the European Cup final was a brilliant tactical display by Thomas Tuchel’s men, who fought back from a goal down to win the match. Hakim Ziyech and Marcos Alonso were the goal-scorers for the visitors.

With that win, Chelsea are unbeaten in their last five league games with their last defeat coming to West Bromwich Albion in early April.

One thing that Tuchel has done well since taking over is realising the full depth of his squad and rotating the players well. Before the game against City, Chelsea took on Real Madrid in the Champions League semifinal and beat them 2-0.

Between those two matches, Tuchel employed varying starting XI and in both cases, the results were favourable. While the likes of Kante and Werner were a constant, players like Mount, Haverts, and Ziyech brought in a much-needed change of pace and fresh pair of boots to pick up the slack in demanding schedules.

Chelsea have a crucial FA Cup final against Leicester City this weekend and consequently, rotation in the squad can be expected.

Arsenal have already lost 13 matches this season and are on track to deliver one of their most disappointing results in the last couple of decades. Currently sitting the ninth place with 52 points, their chances of securing the Europa League berth next season look next to impossible.

To put it differently, they have not lost more than 13 matches in a season since the 1994-95 Premier League – back then, they finished 12th.

Rookie manager Mikel Arteta has come under a lot of flak but it got exacerbated when his side lost to Unai Emery’s (former Arsenal man) Villarreal by 2-1 on aggregate in the Europa League semis.

Last weekend, the Gunners tried to redeem themselves by beating West Bromwich 3-1 and sending them to relegation.

But that may be the case of too little, too late. Looking at their recent Premier League record, they have won three of their last five with the other two ending in a draw and a win. However, their away record is fairly better as the Gunners are unbeaten in their last five trips.

It is certainly a tall order to expect the mid-table struggles to beat Chelsea at home but Arsenal do have their moment, especially with the presence of individual stars like Aubameyan and Lacazette.

Wednesday’s match will mark the 203rd time that the two teams will be meeting in all competitions.

Arsenal lead Chelsea with 79 wins compared to the Blues’ 65. 58 games have ended in a draw.

The Gunners have also beaten Chelsea in their last two meetings – the FA Cup final last season by 2-1 and the home-leg league fixture by 3-1. In both cases, the Blues were led by Frank Lampard, making this upcoming match the first time that Arteta faces Tuchel in a battle of tactics.

Recommended Bet: Back Chelsea to win @ 1.72 with Casumo

Chelsea have got their affairs sorted quite neatly – they have Champions League, FA Cup, and top-three Premier League finish to play for in the next few matchdays.

Defensively, they have been just as brilliant having conceded only 4 goals in their last 10. Their players are in a good form and the boys have the ability to play cohesively as a team and perform under the high standards set by their manager.

Even rotating the squad delivers a similar result, thus highlighting the incredible depth and talent that Chelsea have.

As for Arsenal, they have a good H2H record and a decent away performance to bank upon. Plus, it is also a matter of pride for Arteta who will look to save face by beating their London derby rivals and hope that he doesn’t come under that much scrutiny.

However, when we compare the squads, their recent form and overall play like for like, Chelsea come out on the top. They have the momentum, in-form players, and skills needed to win here.

Timo Werner to be Anytime Goalscorer

Recommended Bet: Back Wener to be anytime goalscorer @ 2.80 with Betway

Werner has scored 6 goals and provided 8 assists this season. He has been the go-to man for Tuchel when it comes to attacking and is a sure-shot starter for Chelsea.

He has been in a fine form of late as well, with two goals and two assists in his last five. The fact that he is available at decent odds makes us go with him.

Under 2.5 goals in the match

In all likelihood, Chelsea will not take this fixture as seriously as they would take Saturday’s FA Cup final against the Foxes. While they will be in this game to win it, it may not be a fully active effort.

Combine this with their defensive prowess at home, all signs point to a low goal-scoring affair.