Manchester City and Chelsea will lock horns in this year’s UEFA Champions League Final on Saturday, May 29. Two of the biggest clubs in English football, they share an intense rivalry spanning over 100 years.

Let us take a look at how Chelsea and Manchester City fare when compared head to head. With that, we will also look at other stats and fun facts ahead of the European Cup final.

There are varying records of how many times the two sides have met on the pitch. However, there have been well over 160 encounters between the Blues and City.

Chelsea have always enjoyed better of this fixture through the years. Interestingly, things did not change much when Pep Guardiola took over as Chelsea’s managers somehow found ways to outsmart the Spanish on numerous occasions.

In the 166 times the two sides have met, Chelsea have emerged victorious in 68 of those. City trail by just 10 wins, having won 58 matches against the Blues, with 40 games ending in a draw.

Mentioned here is the summary of recent meetings between Chelsea and Manchester City across all competitions, dating back to the start of the Guardiola era. 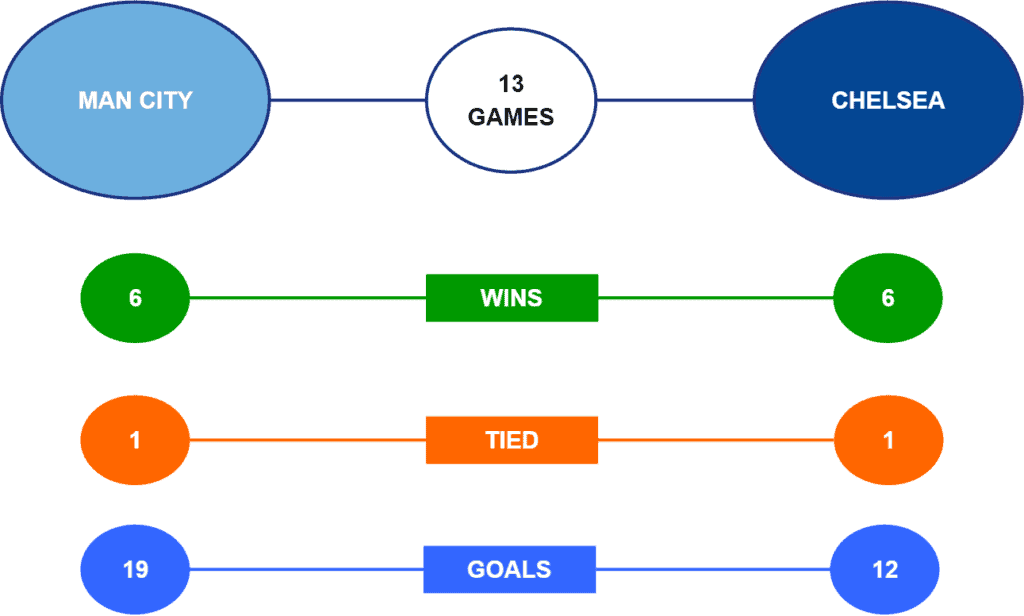 In the 13 times they have met since Guardiola took over the charge of the Citizens, the tally is evenly tied at 6-6 with one game ending in a draw.

In their last five matches across all competitions, Chelsea have won thrice while City have managed just two wins. They defeated the Citizens back to back in the FA Cup semifinal and the Premier League by 1-0 and 2-1 respectively just this month.

The biggest win was when City beat Chelsea 6-0 in the Premier League a few years back with Raheem Sterling and Sergio Aguero starring in that goal-studded affair.

What is certainly intriguing here is that Sterling and Aguero continue to be with City to date. The Argentinean striker is set to leave the club at the end of the season and will be hoping for a nice farewell by winning the elusive European Cup.

However, Sterling and Aguero are both battling injuries and find themselves in a race against time to get fit for the final.

What about their meetings in other finals?

Despite sharing a long history, Chelsea and Manchester City have met in a final only once.

It was the 2018-19 Carling Cup, where after 120 minutes of goalless stalemate, the match moved to penalties. Sterling took the decisive penalty and managed to convert it, thus giving City their first silverware that season.

Later on, they moved on to win the FA Cup and English Premier League too.

They also met in the European Cup Winners’ Cup almost 50 years ago. Back then, Chelsea won the tournament and their path to the final included a 2-0 aggregate victory against Manchester City in the semis.

Chelsea have had more success in the European competitions as compared to their Manchester counterparts.

Their first trophy in international football came in the 1970-71 European Cup Winner’s Cup where Chelsea beat Real Madrid 2-1 in a replay after their first match ended in a 1-1 draw.

The Blues won the same tournament again in 1997-98, this time defeating Vfb Stuttgart in the final. They also won that year’s UEFA Super Cup, beating the Los Galacticos 1-0.

It wasn’t until 10 years later they would enjoy the thrill of playing in a European Cup final once again. In the 2007-08 Champions League, they reached the final but only to lose to Manchester United on penalties.

Fast forward to the 2011-12 season when the Blues finally won the Champions League under Roberto Di Matteo, beating Bayern Munich on penalties in the final. That year also saw them beat Barcelona in the semis. The next season, they played the Europa League after finishing third in the Champions League group stage.

Chelsea won their first Europa League title that year, beating Benfica in the final. A few years later, they would win the competition once again, this time by beating Arsenal by 4-1.

The Champions League and Europa League wins were followed by UEFA Super Cup finals. Chelsea had three chances in three different seasons to add the Super Cup to their trophy cabinet. Unfortunately, they lost all three finals to the likes of Atletico Madrid, Bayern Munich, and Liverpool.

One thing that has always eluded Manchester City is a trophy from the European Competitions.

They have managed to achieve this feat just once – in the 1969-70 European Cup Winners’ Cup. Back then, they beat the Polish side Gornik Zabrze 2-1 to win their one and only European Cup.

Since then, City have reached the final just once – they achieved the feat this year after a long wait of 50 years!

In the last three seasons of the Champions League, they were beaten in the quarterfinal.

In the other seasons, they never quite managed to move past the round of 16 or even the group stages. There is an exception to this – in the 2015-16 season, they reached the semifinal but ran into a mighty Real Madrid. Despite Guardiola’s familiarity with the Madridistas, they lost 1-0 on aggregate.

Nonetheless, City enjoyed a great deal of domestic success in that period.

They won the Football League Cup a record 8 times, 6 of which came in the last decade. City also won the Premier League title on 7 different occasions, 5 of which they achieved in the last 10 seasons.

In many ways, this success can be attributed to the takeover of the club by the Abu Dhabi United Group, whose financial backings helped City build a team worthy of winning titles.

Who will win the Champions League final this season?

This is quite tricky to predict at the moment. City won the Premier League, their players are in brilliant form and Guardiola will be keen on finally winning the title with Manchester City.

Plus, there is also the matter of farewell for Aguero – the striker will look to end his spell with the Citizens by conquering the whole of Europe finally – whether he plays or not.

On the other hand, Chelsea are thriving under the tactician Thomas Tuchel but they may be a bit shaky after losing the FA Cup final to Leicester City by 1-0. However, they did avenge that loss by beating the Foxes in the Premier League by 2-1.

Overall, Chelsea have a superior pedigree on the European stage, having enjoyed some success and stardom in the last decade. They have been particularly impressive in big games and that may give them some edge heading in this game.

As part of our football betting tips, we will be previewing this game in detail a few days before the final where we will give our value bets and predictions.