League leaders Chelsea will look to maintain their perfect start to the English Premier League when they host Pep Guardiola’s Manchester City this weekend.

Chelsea have the advantage of playing at home amidst a crowd that has supported them fiercely through the season so far. More than that, they are in fine form and are look well-established in all departments – defence and attack.

As for City, they face a massive challenge concerning the fitness of their players, in addition to preparing for the busy week on the road ahead and overcoming the last week’s hiccup at home against Southampton.

Even though these are still early days of the season, it is fair to say that Chelsea have made an incredible start and look well on their way to conquer new heights. Four wins and a draw in five matches played, the Blues sit at the top of the Premier League table with 13 points.

Thomas Tuchel has transformed the team into a well-oiled machine that has gone unbeaten across three competitions since the start of the season. A couple of 3-0 wins over Aston Villa and Tottenham Hotspur were complemented by 1-0 victory of Zenit St. Petersburg in the Champions League, and a 5-3 penalties win over Villa in the League Cup.

Chelsea are heading into the game against the Citizens on the back of a four-match win streak. The only problem they encountered was against Liverpool when the 10-man squad drew 1-1 against the Reds.

With a win over Manchester City, they will look to cement themselves as the title contenders for the 2021-22 season. And to make their case, they do have a decent track record against City in their last few meetings.

Coming to player availability, Edouard Mendy may start for Chelsea at the goal after missing the last couple of games. Christian Pulisic also remains a doubt but apart from that, Tuchel hasn’t got a lot to worry about. Romelu Lukaku is soaring at the moment and will start once again in this heavyweight clash.

It hasn’t been a picture-perfect start for Manchester City as they have dropped points in two of their five league matches in England. In addition to the 1-0 loss to Tottenham Hotspur on the opening day, the Citizens were held to a frustrating draw against Southampton last weekend at home.

Sitting at 5th place with 10 points (3W, 1D), the gap is still three points between them and the top teams of Chelsea, Liverpool, and Manchester United. The result on Saturday, however, can see that distance increase further.

Even though the lads most recently defeated Wycombe Wanderers in the League Cup midweek, that 6-1 win still came against a team that is not really accustomed to top-flight English football. Nonetheless, Kevin de Bruyne had a field day as he looks to be his 100%, just in time for the Chelsea affair.

The real challenge starts now as Guardiola has three crucial away fixtures to navigate – Chelsea on Saturday, Paris Saint-Germain on Tuesday in the Champions League, and Liverpool on Sunday in the EPL.

In situations like these, the ability to rotate players is absolutely critical but in the light of the current developments, it is going to be a difficult task for the Spaniard.

Rodri, Oleksandr Zinchenko, Ilkay Gundogan are doubtful while John Stones and Aymeric Laporte are likely to miss this match as well. Depending on how the Saturday match goes, the situation may get more dire.

In the head to head tally between Chelsea and Manchester City, it is the Blues who come out on the top with 71-59, with 39 matches ending in a draw. 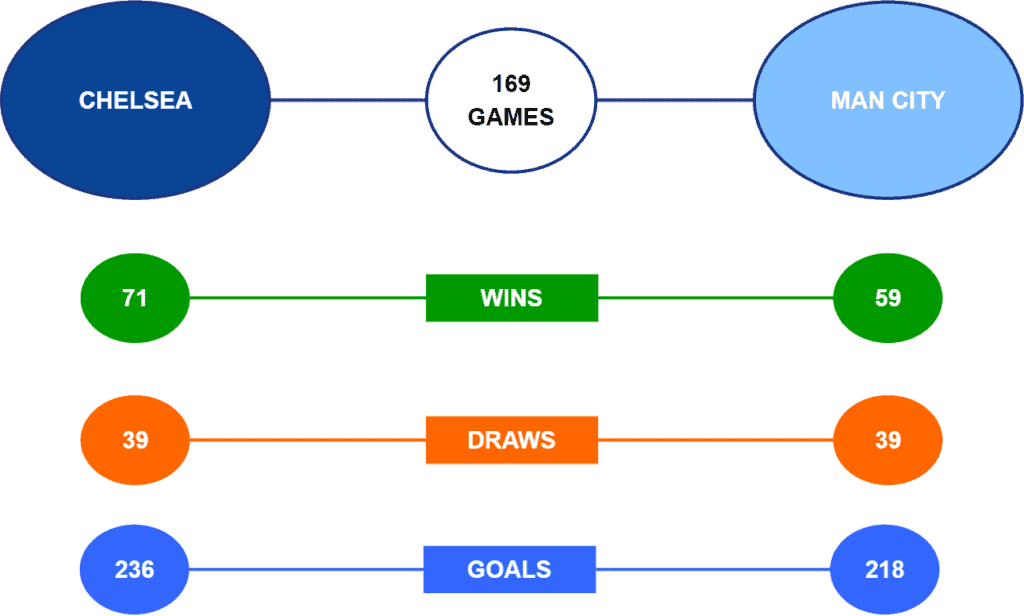 Recommended Bet: Back Chelsea to win @ 2.65  with Casumo

There are many reasons to go with Chelsea here but the major one is simply the fact that they look to be a far superior side than City this season.

Since the addition to Romelu Lukaku to the side, their attack has been given a new breath of life while in defence, things continue to run as smoothly as ever.

While there is no doubt that Thomas Tuchel’s tactical prowess will be put to test by Guardiola on Saturday, the former has more mobility and freedom when it comes to choosing his players; the City overseer, on the other hand, may be limited to some extent due to injury concerns.

All in the all, the reigning Champions League and Super Cup holders have the upper hand against Manchester City, especially seeing that they are playing on their home turf.

Read our Casumo review to find out why we recommend betting on the Premier League here!

Romelu Lukaku to be anytime goalscorer

Recommended Bet: Lukaku to be anytime goalscorer @2.55 with Casumo

This is a big match and the Belgian behemoth is not the one to shy away from a challenge. Considering his form and tendencies to find goals, we can safely bet on him being a goalscorer at any point in the match.

And if this isn’t enough, Lukaku scored a brace against Aston Villa in the 3-0 rout, the winner against Zenit St. Petersburg, and was one of the top performers for Chelsea against Tottenham Hotspur last weekend.

Chelsea have seen over 2.5 goals in their last two home matches in the Premier League.

While I’m not predicting them to keep a clean sheet against the strong attack of Manchester City, they may very well score enough goals to win by a comfortable margin.

Lastly, there is plenty of talent in both sides (despite the selection woes troubling Guardiola). Kevin de Bruyne has a knack for scoring against Chelsea and he may do so again this weekend. No matter how we look at it, this match has all the markings of being a goal-scoring affair.