Based at the iconic Melbourne Cricket Ground, the Stars are a sort of the Big Bash version of the Royal Challengers Bangalore.

Flashy, jam-packed with star batsmen and good to watch but they remain one of just two BBL sides who have never won the competition.

They’ve made the final in the last two editions, their second and third BBL finals.

Big Bash betting sites say they will look to go one better this year.

Where to bet on Melbourne Stars

The best odds on the Melbourne Stars are 5.0 with 10CRIC to go on and win the BBL for the first time.

As ever, they’re joint-favourites and the bookmakers are clearly concerned about their explosive batting line-up but then again, we’ve been here plenty of times before.

It’s a bit too soon to give you our daily cricket betting predictions. But keep an eye on this page and we’ll have them soon enough. 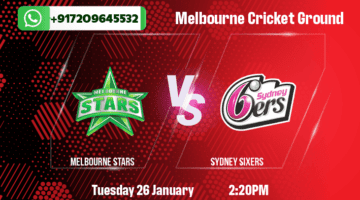 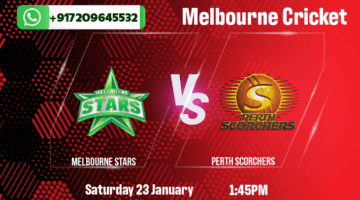 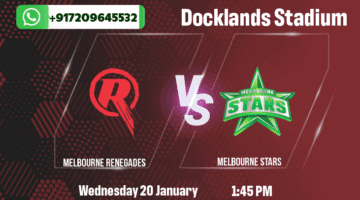 Excellent in the Group Stages, winning them, they then lost to the Sixers in the Qualifier 1.

But they got it right the second time around, beating the Sydney Thunder in the Challenger to book their place in the final.

In a rain-reduced 12 over-match, they couldn’t get up to chase the Sixers’ 116, falling 19 runs short. Glenn Maxwell, Haris Rauf, Adam Zampa and Marcus Stoinis all made the Team of the Tournament, with Stoinis also ending up as the top runscorer and player of the Tournament.

The ‘Big Show’ has been at the Stars since the very beginning of the Big Bash and has now been skipper for the past two seasons.

An uncomplicated cricketer, he’s also an unfussy skipper. They’ll need plenty from him and his big bat if they’re to win it, while his occasional off-spin and brilliant fielding are important, too.

May miss a couple of the first matches on Australia duty but will be around for the rest of the tournament.

That he was last year’s Player of the Tournament tell its own story.

He’s fresh from a good season in the IPL with runners-up Delhi where he batted at six and bowled a fair bit.

The Stars prefer to open with him and last season he didn’t bowl much, but the option to give him the ball is there if they want it.

A superstar batsman who could well come close to being BBL top runscorer once again. Australia’s first-choice ODI and T20 spinner will, as usual, have a big role to play in the middle overs with his leg-spin.

They’re not always the best at defending so his ability to break partnerships and take crucial wickets will be vital.

An economy rate of 7.31 throughout his T20 career is very respectable and a strike rate of 18.0 is pretty good, too.

The purchase of the extremely tall pace bowler Billy Stanlake looks an important one while they’ve loaded their top order with international talent in the form of and Nicholas Pooran.

The thought of Fletcher, Stoinis, Maxwell and Pooran batting in the Top 4 is scary for every other team in the tournament.

The last three were all important batsmen for their sides in the recent IPL at the service of the Sunriserers, Capitals and Kings XI respectively

Unlike other seasons, they won’t lose many players to international duty because the BBL coincides with Australia Test matches, not limited-overs games, and they don’t have any Test players.

So that means key players like Zampa, Maxwell, Nathan Coulter-Nile and Stoinis should be available for practically the whole competition.

They’ve made three finals and lost them all. Draw your own conclusions from that.

Nathan-Coulter Nile, Adam Zampa and Billy Stanlake are all very solid but they look a bit short on bowling beyond that.

They look a side perfectly suited to chase but if they post below par, it may not be so easy for them to defend it.