A devastating defeat to the Strikers last time out for the Melbourne Stars mean their hopes for a spot in the finals are all but over – they lie sixth, two points adrift of the eliminator spot with just two games to go.

The Brisbane Heat are even further back in sixth – five points off fifth in seventh place – but remarkably, qualification to the finals still lies in their hands. .

It’s been a season to forget for both teams, with each struggling through injury crises and Covid-19 outbreaks – but which side will muster one last push for pride?

I’m backing the Stars to win as part of my Melbourne Stars vs Brisbane Heat betting tips. Take a look at my live cricket satta rates and other predictions ahead of the game, which kicks off at 1.45 pm (IST) on Sunday 16th January at the Melbourne Cricket Ground (MCG).

The Stars come into this tie as favourites at 1.59 and it is not surprising. In my eyes, they have a better squad with better players.

Today’s cricket betting prediction is a win for the Stars – but check out my Hot Bet for bigger odds.

The Stars slipped to a faltering defeat to the Strikers last time out – meaning their path to the finals is all but closed.

In truth, the Stars never looked like threatening an average target of 155 – the ever-reliable Joe Clarke and super star Glenn Maxwell couldn’t get going at the top of the order, and the chase tailed off meekly.

The reaction of fans on social media was angry – one suggesting the Stars are the most underachieving club in Australian sport over the last 20 years.

I wouldn’t go that far – but I understand the frustration. On paper, their squad list is one of the strongest in the league.- but they have been struggling to click all season.

All that being said, I am sticking with the Stars as part of my Melbourne Stars vs Brisbane Heatbetting tips – I am backing the strength of their squad to be the difference.

All-rounder Marcus Stoinis made an underwhelming return to the line-up in the defeat to the Strikers – scoring just one run without bowling a ball. Nevertheless, his return provides a filip to the Stars’ close season.

Nathan Coulter-Nile is also on the verge returning from a hamstring injury, though stars Haris Rauf and Qais Ahmad are unavailable after returning home for planned commitments.

He was easily the standout performer for the Stars in what was admittedly a small pool to pick from.

An incredible switch-hit for six was the highlight of his 49-run innings, which came from just 35 balls. He was close to taking the Stars home from an unlikely position, but it wasn’t to be.

He is by no means the stand-out name on the scorecard when you rifle through the list of a-listers the Melbourne Stars have on their books – which is why you can get a good price on Cartwright to finish Man Of The Match – you can back him at 15.0 with Betway!

The Heat have also had their fair share of issues with injuries and covid-19 outbreaks but have had to couple their misfortune with the deserting of form in several key players, which is why they find themselves in strife at the bottom of the table.

The likes of Chris Lynn, Ben Duckett, and Tom Cooper have been struggling with consistency, and it is in the batting ranks where the Heat are most vulnerable. They haven’t scored more than 150 in any of the last five matches.

They are facing a fourth-straight defeat, and it will take a miracle for the Heat to qualify – but there is still hope within the ranks they have what it takes to advance.

After Covid-19 decimated the team in the first week of January, nine first-team players were available to play for the defeat against the Adelaide Strikers.

Player to Watch: Will Prestwidge

It was hard to pick a standout player for the Heat in the last match, given the lack of all-round quality, but Will Prestwidge can hold his head high.

The young Australian got 2/34 from his four overs – including the vital wickets of Matt Short and Jake Weatherald – and bowled with great intent.

He has shown what he can do with a bat in hand too – in his penultimate match, he hit 21 from seven balls against the Hobart Hurricanes to help them set a respectable total.

I like him at 5.0 to be top bowler for Brisbane Heat – take on one of the best Indian sports betting sites in the business and place your punt with 10CRIC!

The Melbourne Cricket Ground (MCG) plays host to this crucial clash – no player has scored more Big Bash League runs at the MCG than Glenn Maxwell – he has 1077 runs to his name, often providing a sure-fire return for top batsman betting markets.

It is set to be a typical summer’s day in Melbourne, with temperatures hovering around the 26 degrees mark and zero wind.

The Heat have won nine games of the 15 completed matches these two sides have completed.

Of the 15 contests, 10 of those games have been won by the side batting first – I reckon the captain that wins the toss will put the opposition into bat off the back of those stats! 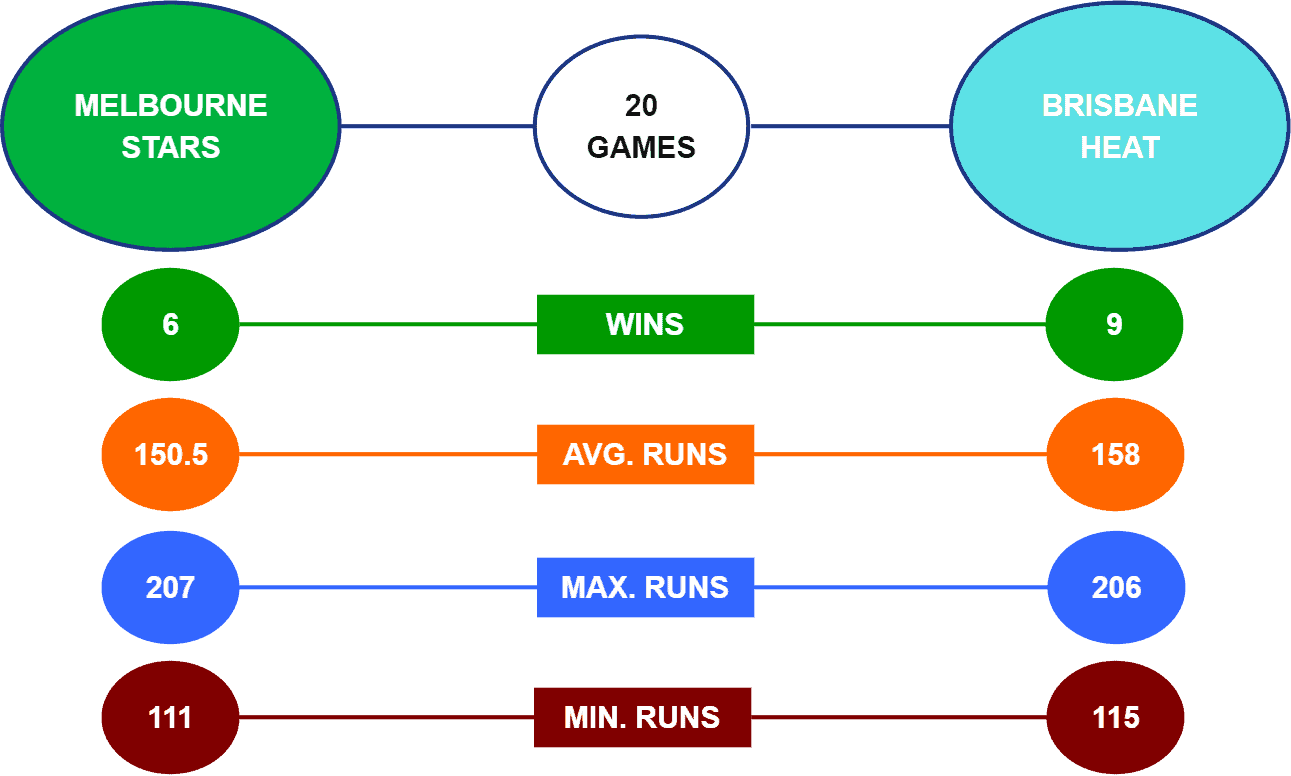 The Stars edge the battle of the coin flip – calling correctly on eight of the 15 bat flips!

The Heat won the toss in the first fixture between these two earlier in the this campaign – I’m backing the Stars to equalise.

You can find the Stars vs Heat toss winner statistics below:

Recommended Bet: Back the Stars to win @ 1.59 with Pure Win

There is enough in the price to back the Stars to get a vital win and keep their rapidly vanishing Big Bash hopes alive.

The hosts have a phenomenal batting roster that do not do their team justice, while the likes of Adam Zampa and breakout star Brody Crouch can provide cutting edge with the ball in hand.

The win probability for Stars vs Heat depends on the performance of captain fantastic Glenn Maxwell, though. If he goes big, so do the Stars!

Read our review on Pure Win to see why I will place my bet with them – they have the best match winner betting markets at the biggest BBL odds.

Recommended Bet: Back Glenn Maxwell to be top Stars batsman at 3.25 with 10CRIC

Captain Maxwell tends to reserve his biggest performances for the biggest stage, which would explain why he hit a majestical 68 not out against their bitter rivals the Melbourne Renegades in his penultimate match.

He threatened to click into gear against the Strikers, making a quickfire 16 runs from 10 runs before seeing his stumps rearranged.

I get the feeling he is on the edge of a big performance, which is why I’m backing him to be top Stars batter at 3,25. I’m placing my bet with 10CRIC – a leading online Indian sports betting site with a huge array of pre-match and in-play cricket betting markets.