Local pride may be the only thing these two sides have left to play for! A desperately disappointing Big Bash League campaign from both teams has left each with the prospect of finishing in the bottom three for the second consecutive year.

Both can point to excuses – but the reality is, they have been miles off the pace, and failure to compete on a regular basis is a damning indictment of the two teams, which hail from a proud cricketing city.

I am going to back the Stars to come out on top as part of my Melbourne Renegades vs Melbourne Stars betting tips – but it’s hardly a clear cut choice. For more online cricket betting ideas ahead of the action, which begins at 2:35 pm IST on Thursday 13th January at the Marvel Stadium, Melbourne, read my full preview below.

The Stars are favourites for the clash – unsurprising given the Renegades have endured two heavy defeats on the trot.

I’m picking the Stars to win as part of my free cricket betting tips. For bigger odds, check out my hot bet!

“Not good” is the simplest explanation to the Renegades’ recent form analysis. Another collapse with the bat meant they were thrashed by 45 runs at the hands of the Sydney Sixers on Tuesday.

After folding for 105 chasing 150, Nic Maddinson’s side now averages 117.5 with the bat across 11 innings – nowhere near good enough at a competitive Big Bash level.

Remarkably, despite their horrific recent form, the Renegades are in with a shout to nab the eliminator spot, which would mean they can still lift the title at the end of the campaign.

They will need to show a lot more character with the bat to get anywhere close to winning the trophy for the first time since 2019, though.

I hope they prove my Melbourne Renegades vs Melbourne Starsbetting predictions wrong, but I can’t see it on current form.

The returning Cameron Boyce impressed on his comeback to the side after a month out injured, taking two wickets for 15 runs from four overs to help keep the target score manageable. He looks set to retain his place in the side.

James Pattinson and Mohammad Nabi are no longer available for selection due to injury and personal reasons, respectively.

He is one of the only players with huge experience under his belt that is stepping up and showing leadership with his all-round performances.

Shaun Marsh hit 39 runs from 35 balls to keep his team in with a shout and was the only player to hit more than 15 runs against the Sixers. Were it not for his runs, the Renegades would have been looking at another score below 100.

On current form, he is a solid bet to finish the Renegades’ top batter – you can back him with Betway at 3.20.

The Stars have a few more excuses up their sleeves – they were rocked by a rabid Covid-19 outbreak 10 days ago which displaced all of their senior stars.

Adam Zampa, Joe Burns, and Joe Clarke are all back following periods in isolation, adding to Glenn Maxwell’s presence in the starting line-up – though it’s fair to say we haven’t seen the best from the exciting middle-order batsman.

The returning players had a positive effect to help them scrape past the bottom-placed Adelaide Strikers in their penultimate match, though they were demolished by the Scorchers last time out.

They have won four of their ten matches – though failure to nab the bonus points on offer means they lie second from bottom on 14 points.

I think they will have enough under the bonnet to steer past the Renegades!

The Stars may have the luxury of naming an unchanged line-up for one of the first times this season – early team news suggests they will be able to name an unchanged eleven.

The Englishman can count himself as one of the breakout stars of the Big Bash League – bagging four half centuries and over 300 runs in nine BBL matches, averaging 33.66 for the season.

When you consider he’s also got two ducks to his name, those stats start to feel slightly more impressive.

I reckon 3.75 is a fair price for Clarke to score a half century – you can back him with Betway!

The Marvel Stadium is the perfect venue for a local derby of this magnitude. Back in 2017, it was voted the most entertaining cricket stadium – and for good reason.

Let’s hope the heavy thunderstorms forecast for Friday stay away for a full day’s play!

The Stars have a two to one had-to-head advantage over the Renegades – winning 14 of the 21 matches these to have contested.

Despite their domination of this derby, the Stars are battling to avoid their third straight defeat to the Renegades, having lost two in a row against their bitter rivals. 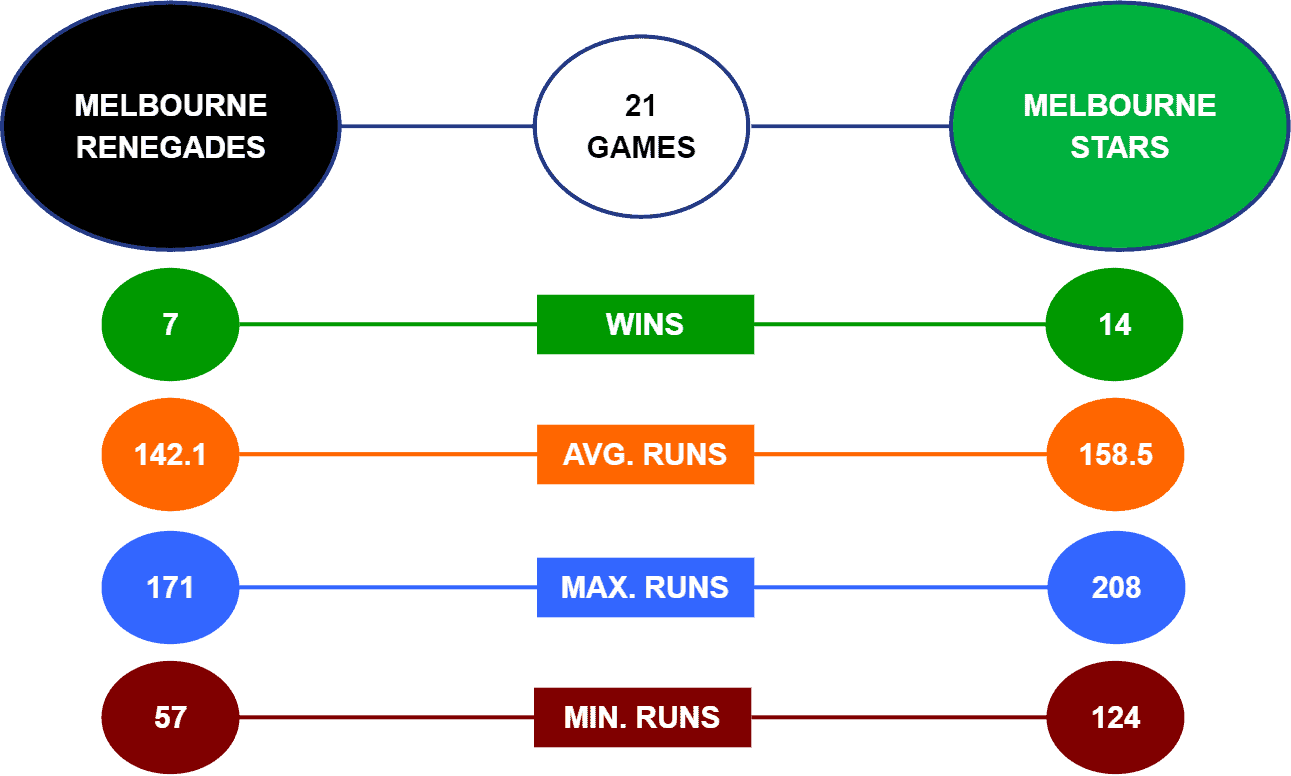 The Stars also dominate at the bat-flip, having won 13 of the 21 toss-calls between the two.

The Stars won the toss the last time these two played each other, and I’m backing them to call correctly again.

You can find the Renegades vs Stars toss winner statistics below:

Recommended Bet: Back the Stars to win @ 1.59 with Pure Win

It’s a tricky one to call – but I can only go off the overall performances of both teams coming into this tie, and the Renegades have been in horrific form.

The Stars are back to full strength, and their big players are in much better nick than those of the Renegades!

I’m going for a Stars win as part of my Melbourne Renegades vs Melbourne Stars predictions, and I’m placing my bet with Pure Win – the leading online sportsbook for all Big Bash events.

You can find out why we’re such advocates of Pure Win by reading our sportsbook review.

Hot Bet: Back Joe Burns to be top Stars batsman at 5.50 with Betway

A player with invaluable experience across all formats of international cricket, Joe Burns brings a calming and reliable presence to the Stars’ batting roster.

He hasn’t hit his straps this season yet, but he has too much quality to continue failing, and I can see him registering a big score against a flailing Renegades team.

I think 5.5 is a fair price for him to be the top Stars batsman – you can bet here.